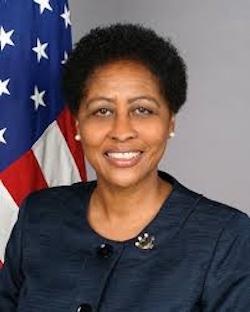 Ambassador (Ret.) Eunice Reddick leads a discussion on civil-military relations during a SAMS seminar at the U.S. Army Command and General Staff College on December 3.

During her visit to the area, Ambassador Reddick visited with the students and faculty at CGSC’s School of Advanced Military Studies (SAMS), where she learned about the SAMS program and participating in a seminar on civil-military relations. Reddick also sat on an interagency panel with representatives from the Department of State, U.S. Agency for International Development, Central Intelligence Agency, and Federal Bureau of Investigation.

On the afternoon of Dec. 4, Ambassador Reddick participated in a “Lunch & Learn” at the University of Saint Mary (USM) in Leavenworth, Kan. At USM, Reddick met with students and faculty, speaking on “Africa at a Crossroads.” She discussed the continent’s unprecedented growth and advancement, as well as lingering threats, such as political instability and terrorism. Reddick also informed students on the wide variety of careers available in the foreign service, and encouraged the faculty on how to prepare students for such careers.

Ambassador (Ret.) Eunice Reddick speaks to students during a “Lunch & Learn” at the University of Saint Mary on December 4.

Later in the evening, Reddick attended a “Plato’s Cave” dinner with CGSC students and faculty. The topic at hand was “Tomorrow’s Leader: Military Genius or Artificial Intelligence,” and the discussion was facilitated by Bud Meador and Major Dana Gingrich.

Ambassador Reddick spent Dec. 5 at the University of Kansas (KU) in Lawrence, Kan. While at KU, Reddick attended a class on the French-speaking world outside of France, where she spoke about colonialism, slavery, imperialism, and U.S. involvement in the Congo, Haiti, and Vietnam. While at KU, Reddick visited with the KU School of Languages, Literature & Culture, where she spoke about her career and career opportunities in the foreign service. Reddick also participated in a lunch discussion on Country Team dynamics. Ambassador (Ret.) Eunice Reddick meets with students at the University of Kansas on December 5.

Ambassador Reddick later traveled to Park University in Parkville, Mo., where she participated in a round table discussion on “China’s Strategy in Africa and Asia: Why It Matters to the U.S.”

On the last day of her visit, Ambassador Reddick visited with students and faculty at Leavenworth High School (LHS) in Leavenworth, Kan. At LHS, Reddick met with AP Government students, where she spoke to them about career opportunities in the foreign service, her experience as an Ambassador, and foreign policy development. Ambassador (Ret.) Eunice Reddick addresses a group at Park University on December 5, speaking about China’s strategy in Africa and Asia.

Ambassador Reddick will return to the area in the spring for her final visit as the DACOR Visiting Professor of Diplomacy for academic year 2019.

The DACOR Visiting Professor of Diplomacy Program is conducted in partnership with the Diplomatic and Consular Officers, Retired, Inc. (DACOR) organization located in Washington D.C., and the U.S. Army Command and General Staff College Foundation. Several times a year retired senior officials, usually Ambassadors with extensive diplomatic experience, come to Fort Leavenworth to interact with the U.S. Army Command and General Staff College students and faculty to provide a Department of State and Chief of Mission perspective to the curriculum. During their visit they also interact with area universities and civic organizations discussing policy, regional, and political expertise, as well as speaking about careers in the Foreign Service. Ambassador (Ret.) Eunice Reddick concluded her tour with a visit to Leavenworth High School on December 6.

The DACOR Visiting Professor of Diplomacy Program for academic year 2019 has been made possible with support from the University of Saint Mary and Park University.

For more information on the DACOR Visiting Professor of Diplomacy program or any other lecture series from the CGSC Foundation/Simons Center contact Rod Cox, email– rcox@cgscf.org or Elizabeth Ditsch, email ehill@thesimonscenter.org. The DACOR Program’s schedule fills quickly. Please contact the Simons Center in advance if you are interested in participating.