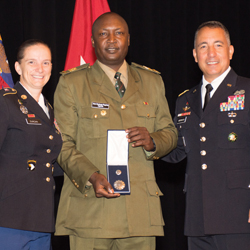 In 1894, Swiss Lt. Henri Le Comte became the first international officer to study alongside U.S. officers when he attended the School of Application for Cavalry and Infantry, the precursor to the CGSC. Since then, international student participation has continued on Fort Leavenworth with more than 8,100 officers from 164 countries having graduated from the Command and General Staff Officer Course.

The 109 international students for the 2018-19 academic year were first welcomed to Fort Leavenworth and the CGSC with the International Flag Ceremony on Aug. 13, 2018. The badge ceremony served as the bookend for the year and precursor to the CGSOC graduation with more than 1,000 of their U.S. peers.

The badge depicts the Kansas State flower, the sunflower, with 12 bright flower petals and 12 dark flower petals, symbolizing the 24 hours of the day. In the center of the badge, the words “U.S.A. Command and General Staff College” surround the Lamp of Knowledge, the symbol of the college.

Along with the presentation of the badges, the recipients of the General Dwight D. Eisenhower Award and the Major General Hans Schlup Award — the two CGSOC awards reserved solely for international graduates — were announced during the ceremony. Both awards are sponsored by the CGSC Foundation.

The Eisenhower Award recognizes the most distinguished international graduate of each class. The 2019 recipient was British Maj. Nicholas Stafford. He said it was humbling to receive the award.

“I feel very fortunate,” Stafford said. “I think this is a very talented group of internationals here, so I feel surprised and lucky to be awarded.

“One of the valuable things about coming here as an international is you get to fully immerse in American military culture, and it gives you a whole new lens with which to look at your own culture, and I think that is really powerful,” he said. “Then, one of the real strengths of this program is there are so many countries represented here … It is a fascinating experience.”

Stafford will stay at Fort Leavenworth to attend the School of Advanced Military Studies.

The Schlup Award, in honor of the late Swiss Maj. Gen. Hans Schlup, who graduated from CGSOC in 1978, recognizes an excellence in international relations while at Fort Leavenworth, and the winner is solely selected by his or her peers. The 2019 recipient was Dutch Maj. Martijn Reuvers.

During the ceremony, students were addressed by the new Army University Provost and CGSC Deputy Commandant Brig. Gen. Stephen Maranian. He said the badge is cloaked in symbolism.

“Collectively, your class joins the ranks of an extremely distinguished group of previous international military student graduates, and (the badge) is a sign that you embody the finest military qualities,” Maranian said. “Above all, it represents a tradition of excellence forged by the remarkable accomplishments of your predecessors and serves as a reminder of the burden you now bear to uphold the finest legacy it represents.”

“I just want to express that this year here at Fort Leavenworth was an eventful year full of invaluable experiences for us internationals. We are very grateful for the opportunity to have experienced this with you, our American comrades,” Spranger said. “I want to thank especially all of the U.S. students as they have always been good advisers, amazing comrades and, even more important, we became friends. I am certain that the friendships we made here and the perspectives we formed here will follow us throughout our lives. May those lives be long, healthy and peaceful.”

Following his remarks, Spranger and Albanian Maj. Lorena Papa presented the IMS class gift to Maranian — a 25×36 framed composite of the portraits of the 2019 IMS cohort and a sealed time capsule with letters to the future to be opened upon arrival of the 150th IMS class in 2044.

Editor’s Note: This article was originally published in the Fort Leavenworth Lamp.

For more photos from the ceremony see the album on the CGSC Flickr site.