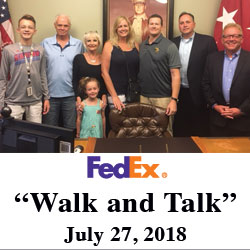 The CGSC Foundation welcomed FedEx executives and their family members for a tour of Fort Leavenworth and the U.S. Army Command and General Staff College on July 27. Foundation board member Mike Meyer brought FedEx on board last year as one of our sponsors of the 2017 Celebration of Friendship event. Because of their involvement in that event, FedEx leaders were interested in learning more about the CGCS international military student program as well as Fort Leavenworth. The group tour started with learning that Henry Leavenworth established the fort in 1827. They learned that although Colonel Leavenworth had been told to build a cantonment on the east side of the river, he realized that it made more sense to be on the west side high on the bluffs overlooking the river. As the bus followed those bluffs, the group viewed the beautiful brick homes including the home of General MacArthur, which is the oldest continually inhabited home in Kansas. Next they passed by the old disciplinary barracks, which now houses a café and gift shop as well as the simulations lab. They also had the chance to visit the monuments of General Grant and the Buffalo Soldiers.

The next stop was the Lewis and Clark Center, home of the U.S. Army Command and General Staff College. The Lewis and Clark Center is a world-class facility that provides over 96 high-tech classrooms for the 1,200 officers that attend CGSC each year. They visited all the key spots in the Lewis and Clark Center – they took photos in the MacArthur room, and perused the Commander in Chief hallway, as well as the Fort Leavenworth Hall of Fame. They also took time to view the art and gift collection given by international officers and others, as well as the beautiful stained glass windows that previous graduating classes donated to the College. They also got to step inside a classroom and learn more about CGSC class dynamics and the curriculum.
The group’s final stop was the CGSC International Hall of Fame where they discovered the importance of the international military student program and how the relationships that are built at CGSC can facilitate military and diplomatic efforts in the future. They also learned more about the sponsorship program that cements long lasting friendships between the officers and individuals in the greater Kansas City community.

At the end of the day, Rob Wibright, managing director for FedEx, said, “We enjoyed the tour very much and I am proud of what you all are doing and that FedEx could be part of it.”

Contact Joan Cabell, the CGSC Foundation director of development, to schedule your own group’s “Walk and Talk” tour of CGSC and Fort Leavenworth and learn about the education of leaders for the nation. – joan@cgscf.org.