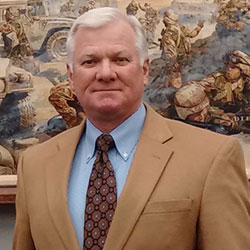 The CGSC Foundation has selected Jeffrey P. LaMoe, the Director of Operations and Support for Army University, as the Person of the Month for January 2019. “Over the years Jeff has worked with the Foundation to advise and coordinate on matters of mutual interest to the Foundation and the DoD which have greatly benefitted the faculty, staff, and students of CGSC, as well as the greater Fort Leavenworth community,” said Foundation President/CEO Rod Cox. “He has provided numerous official briefings and presentations as part of Foundation activities which not only enhanced the quality and utility of the event but also provided outstanding outreach and education to the non-military citizenry.”

Cox added that many of the Foundation’s programs would not have been as successful and meaningful had LaMoe not been a part of the liaison effort and provided his advice and expertise. Jeffrey P. LaMoe, the Director of Operations and Support for Army University, provides an overview of CGSC and the Army’s officer professional development program to attendees at one of two National Security Roundtable Program events in 2018. LaMoe’s overview also includes information about the International Officer program at the College.

“This public recognition for Jeff is long overdue,” said Mark Wiggins, the Foundation’s communications consultant who has worked with the Foundation since mid-2005, before the Foundation’s incorporation that December. “I’ve personally worked with Jeff on various projects over all these years, and can honestly say that without his consistent presence, voice of reason and expertise, the Foundation’s road would have been much more rocky. In particular, his briefings about Army officer professional development and where CGSC fits into that process really illuminate the College’s importance to our civilian visitors during our National Security Roundtable Programs and other events. As a professional communicator, I really appreciate his ability to take complexity and make it understandable.”

As the Director of Operations and Support for Army University, LaMoe is the principle advisor to the Deputy Commanding General for Education for planning, resourcing and daily operations, in addition to general operational guidance and tracking across the enterprise that includes the U.S. Army Command and General Staff School, School of Advanced Military Studies, School for Command Preparation, the Army Management Staff College, Warrant Officer Career Center, the Western Hemisphere Institute for Security Cooperation, U.S. Army Sergeants Majors Academy, and the TRADOC Culture Center. His previous title/position before the stand up of Army University was Chief of Staff of the Command and General Staff College.

LaMoe is a retired Army combat engineer officer who entered active duty as a Distinguished Military Graduate from Colorado State University in 1979. He served for 26 years in a wide variety of leadership assignments, including a tour of duty as an associate professor at the U.S. Military Academy as well as commander of the 168th Combat Engineer Battalion. He also served as the senior combat engineer trainer at the National Training Center, Director of Training at the U.S. Army Engineer School, and a final assignment as the Commandant of the National Geospatial-Intelligence School for the National Geospatial Intelligence Agency. He retired as a colonel in 2005. He is a graduate of the Army’s Airborne and Ranger Schools and has earned masters degrees from Michigan State University and the Army War College.

We salute Col. (Ret.) Jeffrey P. LaMoe for his dedication to the Command and General Staff College and the CGSC Foundation mission for more than a decade. – He is more than deserving of our “Person of the Month” honor for January 2019.