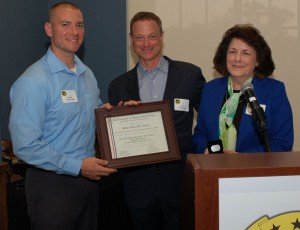 In attendance were Sinise, his wife Moira, daughter Ella Sinise, Anne Harris, wife of the late Lt. Col. Harris, and Katy Harris, their daughter. The inaugural recipient, Maj. Daniel Leard and his wife, was also present.

Sinise presented the award to Leard ceremoniously and will present him the award officially at the CGSC Class 2014-01 graduation ceremony June 13.

Ann Soby, Foundation Director of Business Operations, presented Anne Harris with one of the Five-Star Generals Commemorative Coins in appreciation for her support. Foundation Chairman Lt. Gen. Robert Arter presented Sinise with a Soldier bust in recognition of his work in supporting Soldiers and families over the years, and for his support of the new student award at CGSC.

Foundation and College guests at the dinner had the opportunity to meet Sinise and take photos with him. 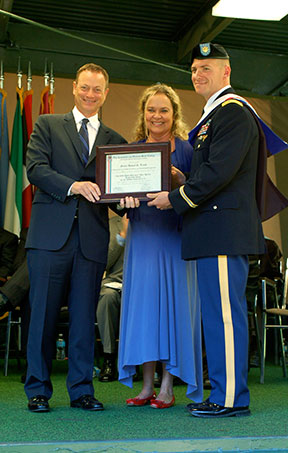