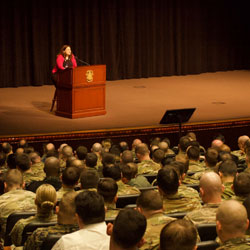 The U.S. Army Command and General Staff College conducted the 10th annual Fort Leavenworth Ethics Symposium on March 25 at the Lewis and Clark Center. This year’s theme was “Ethical Implications of Large Scale Combat Operations.” According to the symposium organizers, the Army must begin the challenging process of thinking deeply and critically about the ethical implications and concerns of large scale combat operations (LSCO), which is the key focus of the Army’s operations manual FM 3-0, which was updated in December 2017. 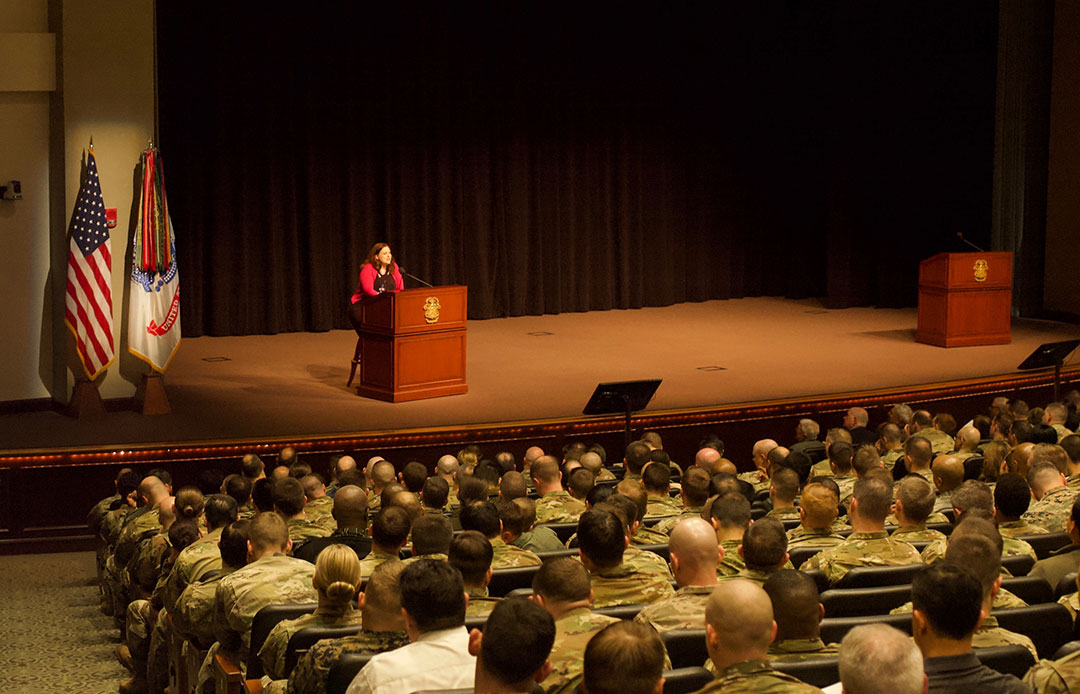 The day-long symposium, cosponsored by CGSC and the CGSC Foundation, began with a keynote address by Dr. Shannon French, the CGSC Foundation Gen. Hugh Shelton Distinguished Visiting Chair of Ethics, and included panel discussions on “When Things Go Wrong: Genocide, War Crimes, and Other Atrocities,” and “Transhumanism, Artificial Intelligence and LSCO.” CGSC students, faculty members and others presented their ethics research papers in 30 separate breakout sessions during the morning and afternoon periods of the symposium. (See the symposium overview for a full list of presenters and topics.)

French, the Ethics Chair since February 2017, led off the symposium saying her concern was more ‘jus in bello,’ the ethical conduct of warfare, rather than ‘jus ad bellum,’ the concept of just war that considers have we gone to war for the right reasons. She challenged the 1,100 CGSC students and other symposium attendees to “connect to the past, and look to the future.” 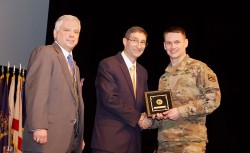 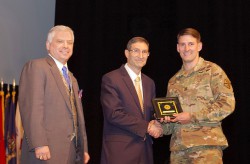 CGSC student Capt. Dana Gingrich receives an award for his paper “What are the ethical implications of the rise of AI and the marginalization of humans?” 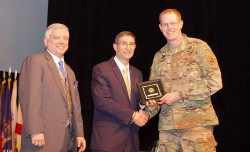 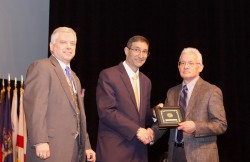 Mark Montesclaros, assistant professor in the Department of Joint Interagency and Multinational Operations at CGSC’s Fort Gordon Campus, receives an award for his paper “Plans from Hell: The Third Reich and the Eastern Front” at the 2019 Ethics Symposium.

She noted many of today’s hot topics have roots in history. Today’s concern about autonomous killer robots is a reflection of the history of land mines, also autonomous killing machines, that goes back hundreds of years. Medically or mechanically enhanced human warriors, transhumanism, is another of today’s hot topics. Looking at history, Celtic warp spasmers, and many other warrior casts used chemical enhancement to add strength, lower sensitivity to pain, and decrease fear making them superior fighters on the battlefield.

Moral harmony, the idea there is always a right thing to do and Greek concept of moral tragedy, the idea that many situations are ‘no-win’ are in conflict, said French. She explained the warfighter must sometimes choose between the ‘lesser of two evils,’ or decide to accomplish one objective while letting another go unanswered. Making these types of decisions within the construct of personal, professional, and societal ethics is the essence of ‘jus in bello.’

Finally, French challenged symposium attendees to “be part of the conservation!” – To that end, Dr. Ted Thomas, director of CGSC’s Department of Command and Leadership, along with Chaplain (Maj.) Jonathan Bailey, CGSC ethics instructor and the symposium coordinator, worked as part of a committee to select the best research papers submitted for the symposium. Two students and two non-students earned symposium awards sponsored by the CGSC Foundation for best papers in their categories.

Foundation President/CEO Col. (Ret.) Roderick M. Cox and Dr. Thomas presented the awards in a short ceremony in Eisenhower Hall at the end of the symposium.

Awards for the best student papers were presented to Maj. Chase Spears, “Ethical Communication Approach for 21st Century Military Victory,” and Capt. Dana Gingrich, “What are the ethical implications of the rise of AI and the marginalization of humans?”

Awards for the top non-student papers were presented to Chap. (Maj.) William J. Sheets, command chaplain at the Judge Advocate General’s Legal Center and School, “Transhumanism and LSCO,” and Mark Montesclaros, assistant professor in the Department of Joint Interagency and Multinational Operations at CGSC’s Fort Gordon Campus, “Plans from Hell: The Third Reich and the Eastern Front.”

The CGSC Foundation will publish a selection of the papers submitted for the symposium in a “Special Report” this summer. The Foundation will also publish other papers suitable for the interagency audience in the Simons Center’s InterAgency Journal at a later date.

Visit the CGSC Foundation album on Flickr for more photos from the symposium.

Visit the CGSC album on Flickr for additional photos.