The Command and General Staff College Foundation presented retired Gen. David H. Petraeus, the 20th Director of the Central Intelligence Agency, with the Foundation’s 2012 Distinguished Leadership Award at a dinner banquet in Kansas City, Mo., May 10. 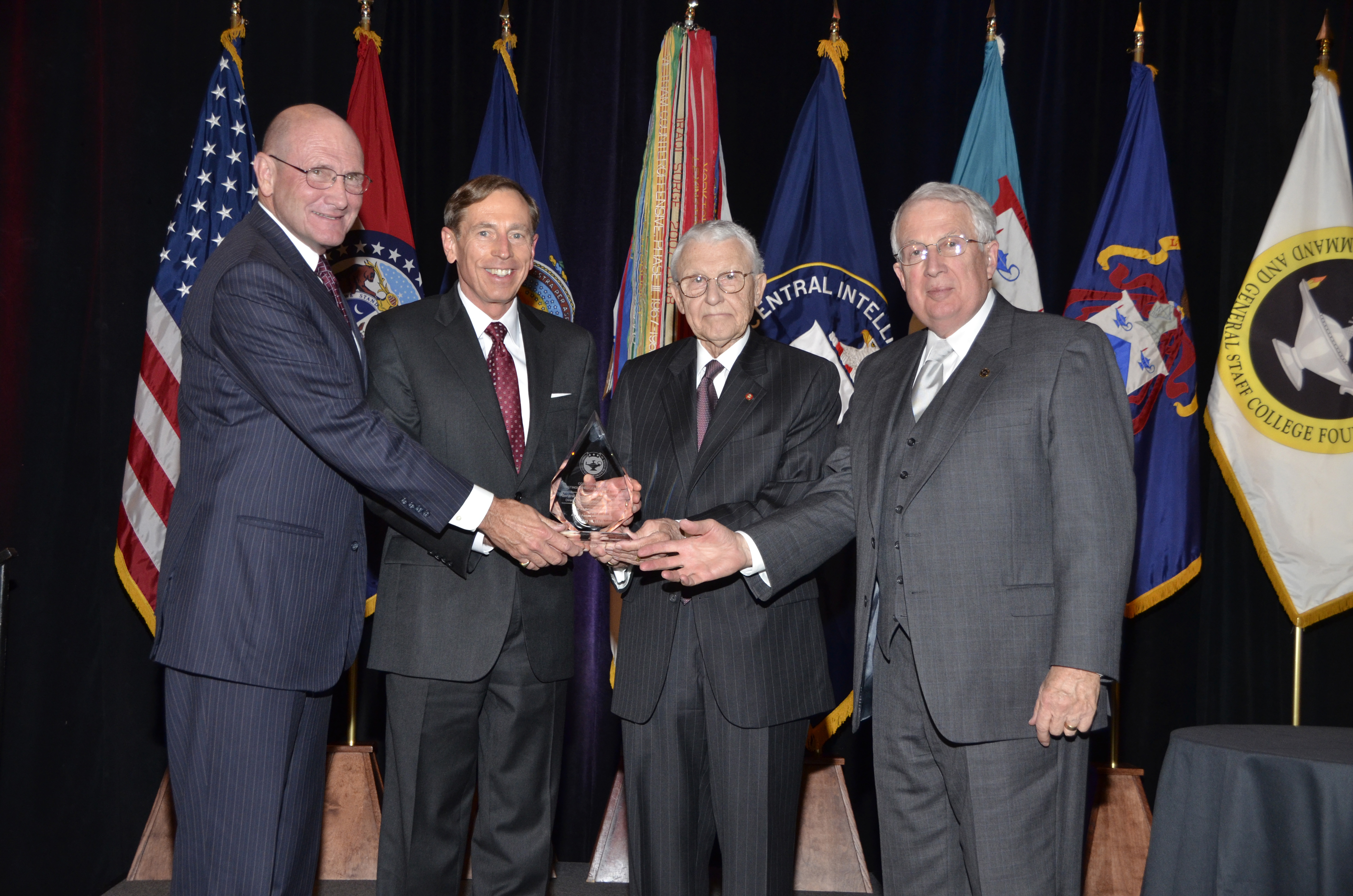 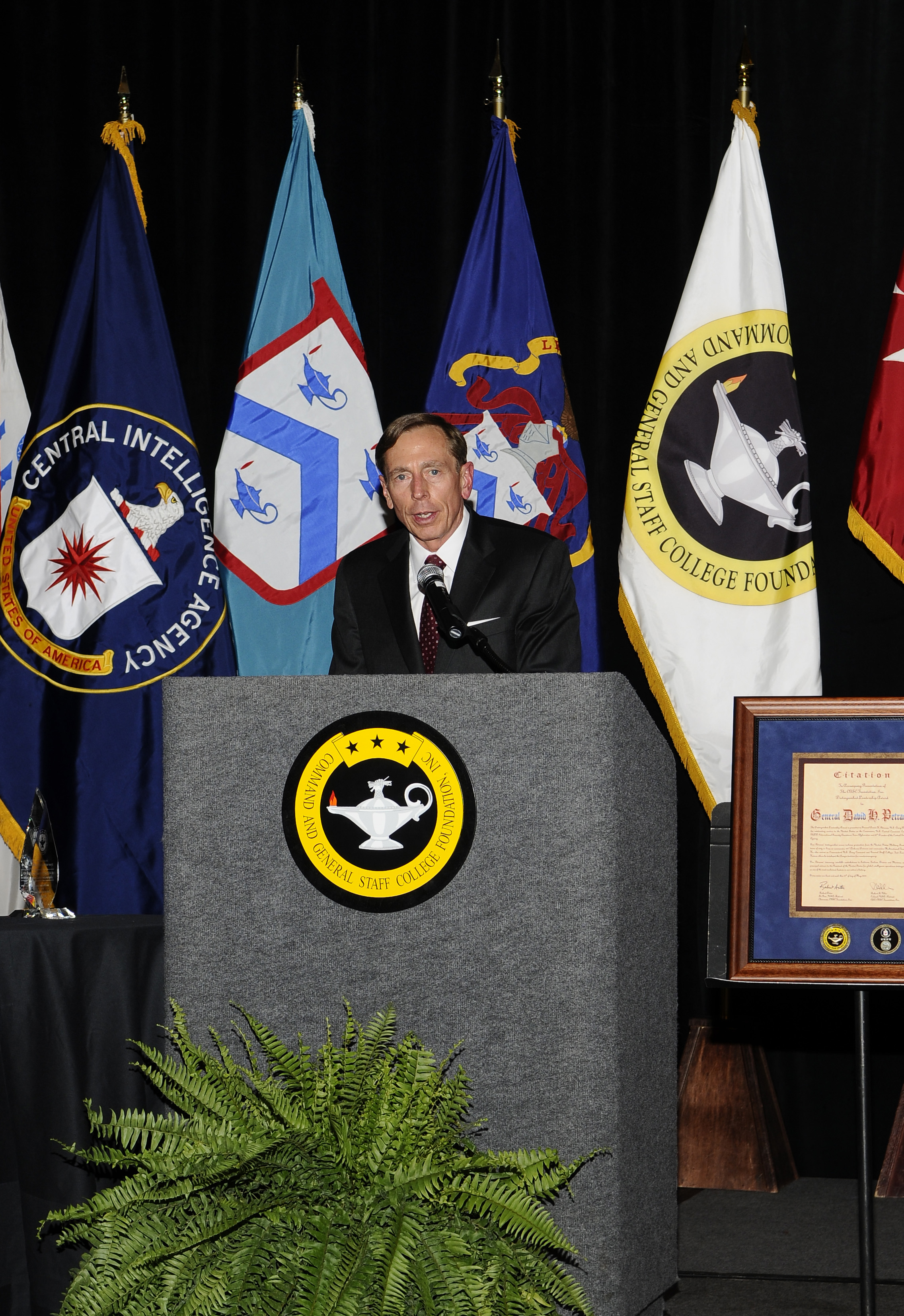 David H. Petraeus, retired Army General and current Director of the Central Intelligence Agency, delivers acceptance remarks after being presented with the Command and General Staff College Foundation’s “Distinguished Leadership Award” for 2012, May 10. Petraeus is the fifth recipient of this national award for leadership excellence. (Photo by Phillips Photography/Kansas City)

Nearly 500 guests gathered at the Kansas City Marriott Downtown Hotel to celebrate the award.  Petraeus, who served with great distinction for 37 years in the U.S. Army, is the fifth recipient of the Distinguished Leadership Award. Previous awardees include the 2011 recipient, retired Gen. Hugh Shelton, the 14th Chairman of the Joint Chiefs of Staff; Ross Perot, the well-known entrepreneur and two-time presidential candidate from Texas, was the 2010 recipient; retired Gen. Gordon R. Sullivan, 32nd Chief of Staff of the Army and President of the Association of the United States Army was the 2009 recipient; and the 2008 recipient, Gen. Colin L. Powell, former Secretary of State and Chairman of the Joint Chiefs of Staff.

“I want to thank you for the honor of being selected for an award that means a great deal to me,” said Gen. Petraeus in his acceptance remarks. “And I want to make it clear that I accept this award only inasmuch as I am able to do so on behalf of all the Soldiers, Sailors, Airmen, Marines, Coast Guardsmen and civilians I was honored to lead in the tough endeavors that were informed and guided by the ideas and culture developed at [Fort] Leavenworth.”

General (Ret.) Petraeus spent 37 years in an Army uniform serving in a variety of positions, most notably those in the last 10 years of his career as Commander, 101st Airborne Division; Commanding General, Multi-National Force-Iraq; 10th Commander, U.S. Central Command; Commander, NATO International Security Assistance Force; and Commander, U.S. Forces-Afghanistan.  He was selected by the President as the 20th Director of the Central Intelligence Agency immediately upon his retirement from active military service. As a three-star general he was also the commander of Fort Leavenworth, Kan., during which time he and Marine Lt. Gen. James Mattis led the effort to write new doctrine for counterinsurgency operations which has been credited by many as a key element in U.S. forces success in the months following the surge of troops into Iraq in 2007.

“General Petraeus’ indomitable will and his extraordinary abilities as a Soldier, scholar and leader more than qualify him for this award,” said CGSC Foundation CEO Bob Ulin. “The nation is extremely fortunate to have had someone such as him serve during such trying times as we’ve had in recent years.  His legacy as a great general and a great CIA director, if I may be so bold as to predict his success in that arena, will be secure in our history.”

Click the image below to watch the Gen. Petraeus Tribute Video 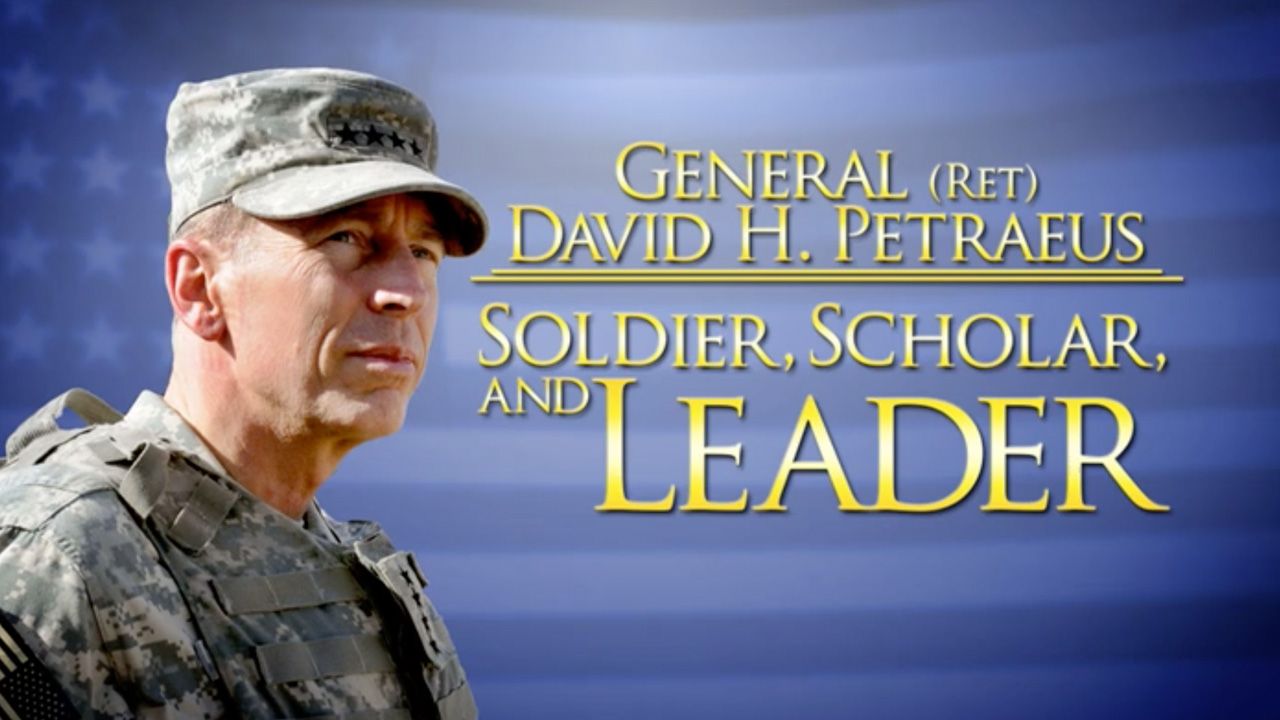