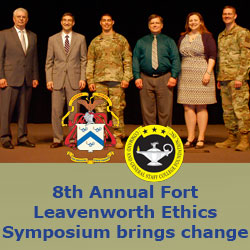 The Foundation and the CGSC Department of Command and Leadership co-hosted the annual Fort Leavenworth Ethics Symposium April 24-25. This was the eighth symposium in the series, which dates back to 2009. In previous years, the symposium was conducted as an elective for CGSOC credit but in 2017, we conducted the event for the entire CGSOC class. While I was personally a bit nervous about the logistics of a symposium that large, our team was able to pull it off without a hitch. The Foundation’s support to the annual ethics symposium grew out of an additional duty of the General Hugh Shelton Distinguished Visiting Chair in Ethics, which is sponsored by an endowment from the Ross Perot Foundation.

Each year, the symposium has a theme to guide the participants. This year, the theme was “The Ethics of Future Warfare.” Past themes were “Ethical and Legal Issues in Contemporary Conflict” (2009); “Exploring the Professional Military Ethic” (2010); “Applying the Military Ethic” (2011); “The Ethics of Vicarious Warfare” (2012); “Professional Ethics and Personal Morality” (2014); “The Professional Ethic and the State” (2015); and “The Ethics of Humanitarian Military Operations and Intervention” (2016). In 2013, the symposium was scheduled for October but was postponed because of the government shutdown that year. A year later CGSC went back to one class per year so holding the event in the spring made more sense.

We were pleased to see 27 papers presented as well as three panels – two from the Army War College Future Warfare Center and one from the Center for Army Profession and Ethics (CAPE). Past symposia were conducted over three days and averaged about 125 participants (an average of 75 students and 50 faculty, paper authors and others from outside the college) so we had more time to get into depth with the panels and paper presentations. This year, we had 57 participants from outside CGSC registered on the Foundation’s ethics symposium website, so the event continues to draw interest. For instance, this year, a CGSC graduate working in his key development position as a battalion operations officer submitted a paper and was sponsored by his unit to attend so the symposium continues to grow in status and reputation.

We had two guest speakers this year, the first on April 24 as an opening speaker after Lt. General Michael Lundy, the commanding general of Fort Leavenworth/Combined Arms Center, opened the conference. Dr. James Crupi spoke to the students and fielded questions as the first speaker and Dr. French gave the closing remarks on the 25th to summarize the conference. Staff groups closed out the symposium with wrap-around sessions to put together final thoughts on the topic and what they need to take forward with them back to the field. As part of the closing event, DCL awarded two writing awards to the top two papers as chosen by an evaluation board. The Foundation partnered with the Henry Leavenworth Chapter of AUSA to sponsor the awards to provide the monetary award along with an engraved crystal paperweight. We wanted to thank our evaluation board and our partners for sponsoring the award and we want to congratulate the two winners, CGSC student Maj. Francisco Hernandez who won first prize for his paper “A Leader’s Duty in Tragedy and Loss,” and CGSC faculty member Dr. Richard Berkebile who won second prize for his paper entitled “Secession and Jus Ad Bellum.”

Students were asked for immediate input and the final AAR will be conducted in mid-May so that we can learn the lessons of this symposium and put together a much-improved 9th annual ethics symposium in 2018. The high level overview of the results from student input showed the following:

We need to thank all of the paper presenters for your research and effort; there were some really great papers submitted. Thanks to the panel members for your thoughts and contributions. A special thanks to Chaplain (Major) Jeff McKinney for his overall effort in putting this together, it was a herculean effort that showed great results. Finally, I’d like to thank Dr. French, the Shelton Chair, for her remarks and her support to the overall ethics program at CGSOC. The Foundation is pleased to support scholarship at CGSC by enhancing the academic experience and we believe we hit the mark!

Visit the CGSC Foundation Flickr site for more photos from the symposium: