The Academic Year 2020 CGSC Foundation and DACOR Visiting Professor of Diplomacy, Career Minister (Ret.) Ambassador Katherine Canavan conducted her fall term visit Dec. 2-6, 2019. Her visit included meeting in a variety of forums with more than 300 students and faculty from the Command and General Staff School, the School of Advanced Military Studies, Park University, the University of St. Mary, Kansas University, and Leavenworth High School, as well as with dozens of business and community leaders. 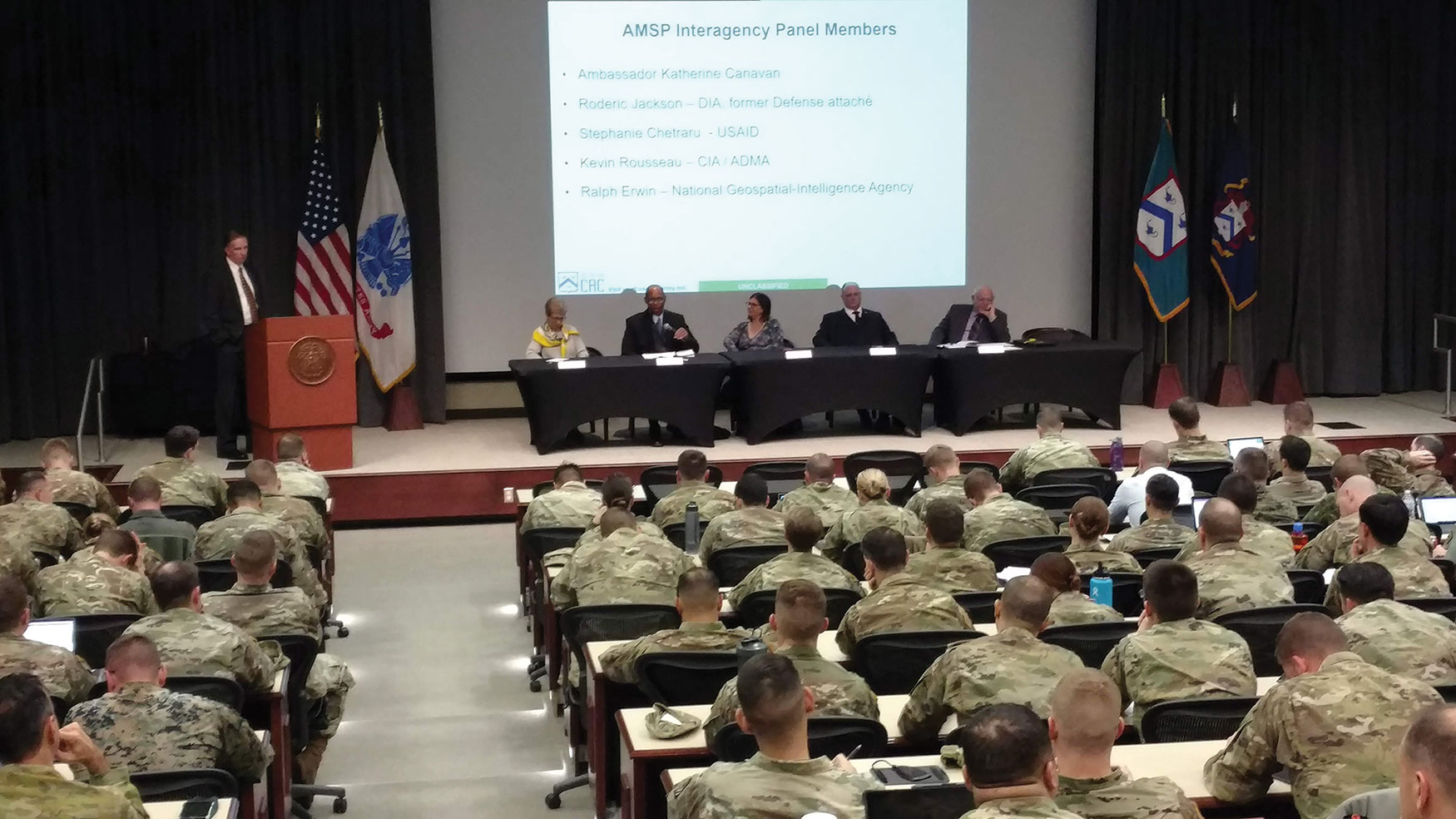 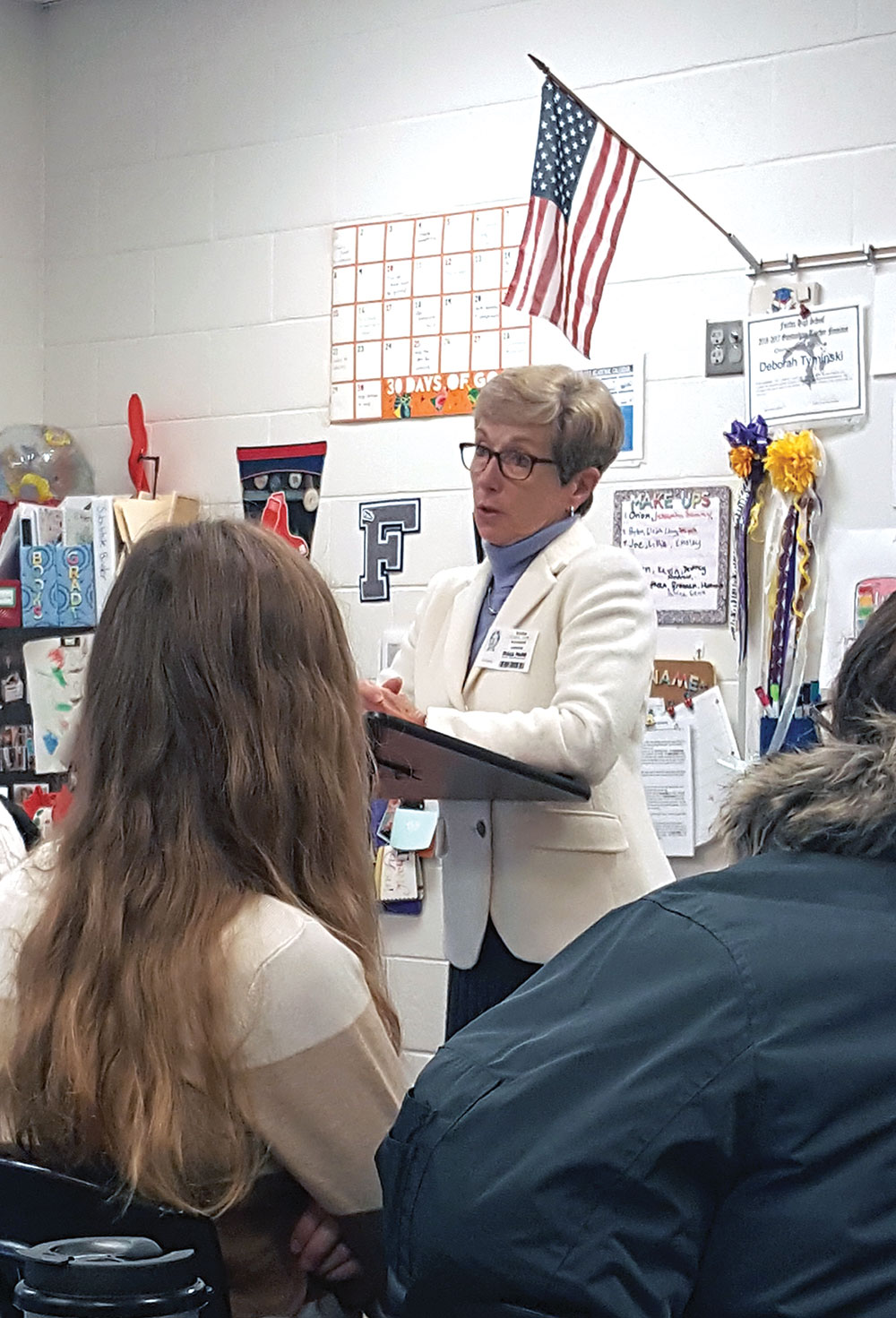 Ambassador Canavan speaks with students at the University of St. Mary on Dec. 3, 2019. (photo by Paige Cox) 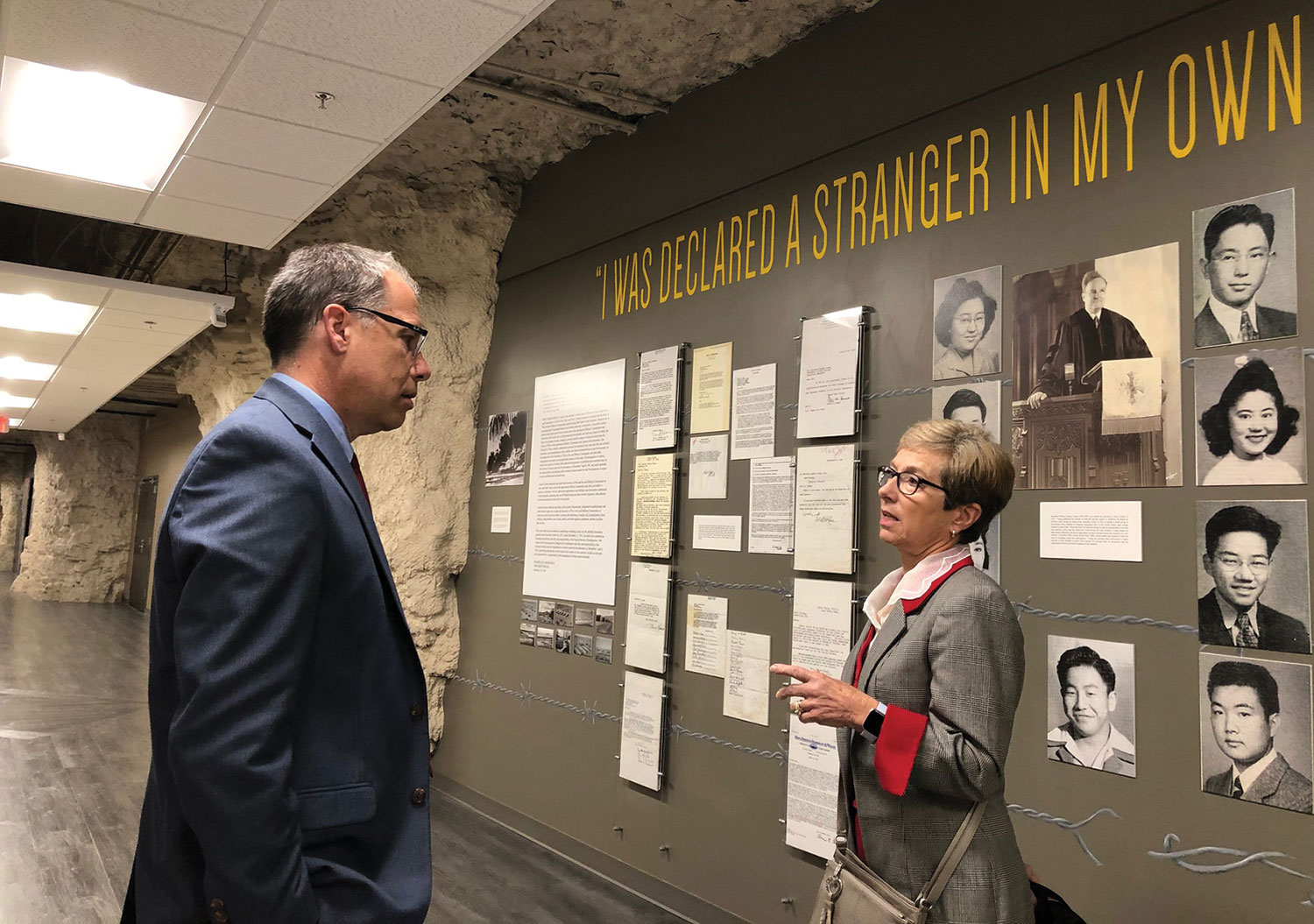 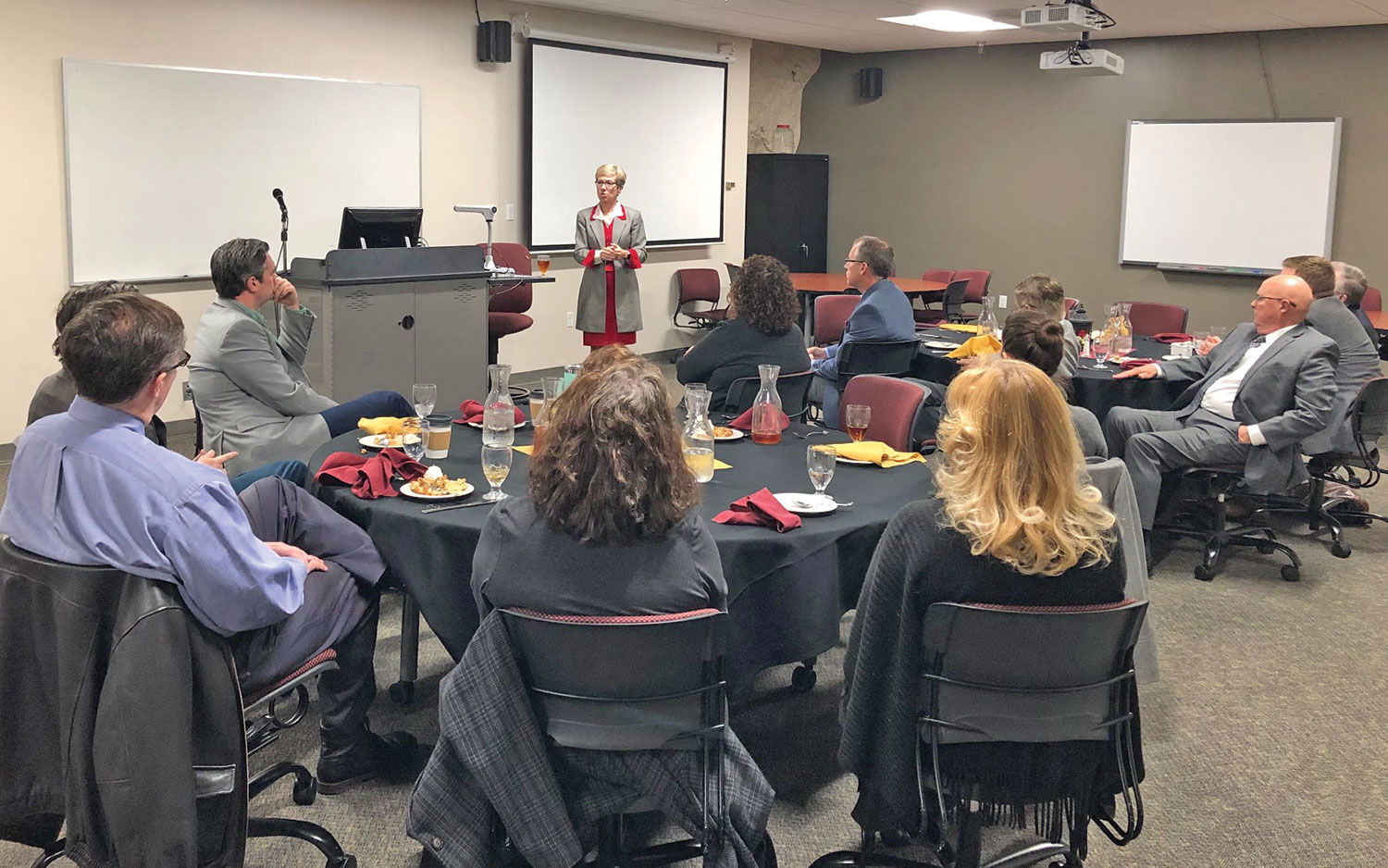 Ambassador Canavan provides a presentation to Park University faculty and staff during a luncheon on the campus Dec. 4, 2019. (photo by Elizabeth Ditsch) 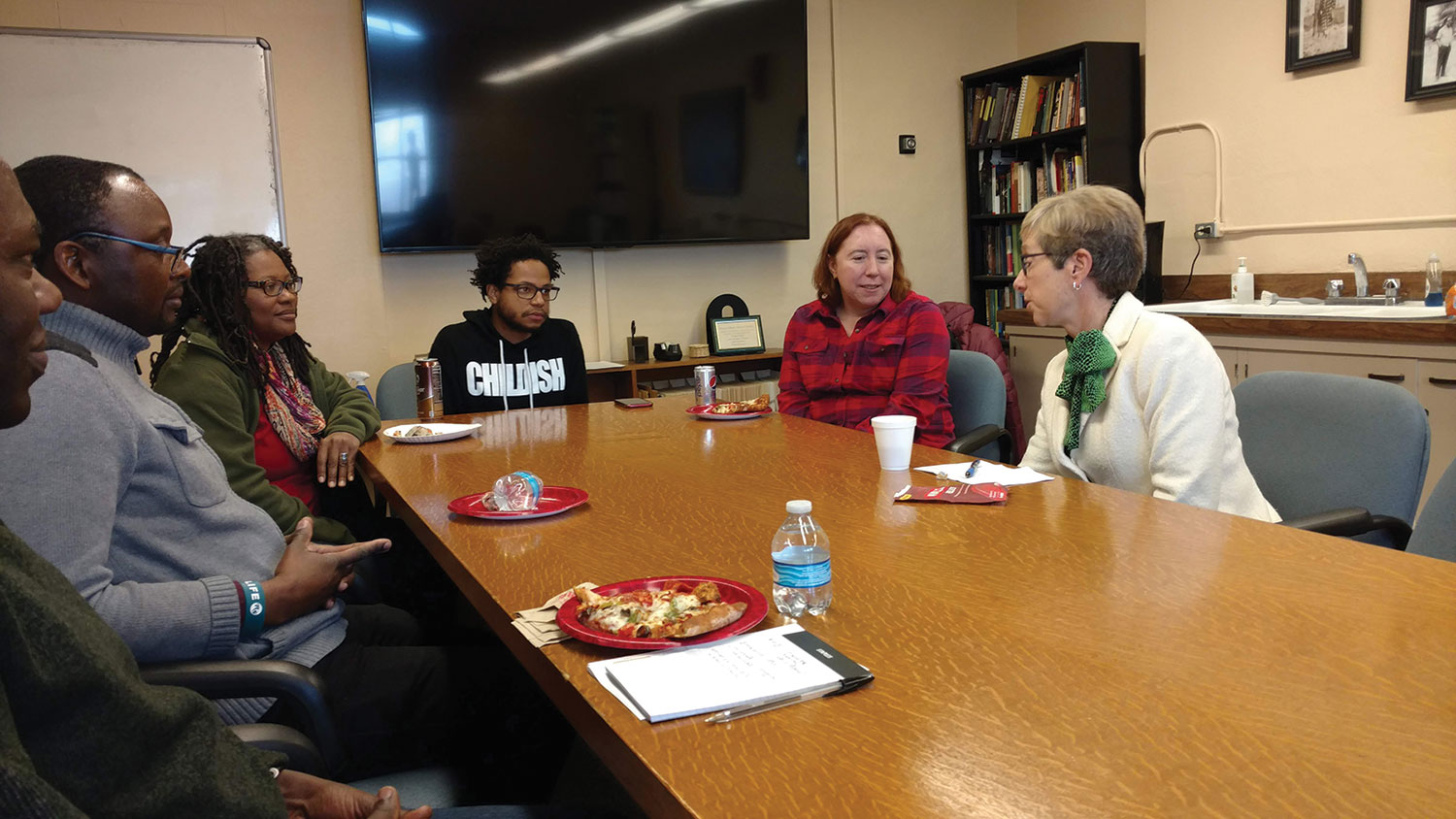 Ambassador Canavan meets with faculty of the African and African American Studies Department during her visit to the University of Kansas Dec. 5, 2019. (photo by Rod Cox)

On Dec. 2, Canavan met with CGSC’s Dean of Academics, Dr. Jim Martin, who provided her with an overview briefing of Army University and the Command and General Staff College. She attended the promotion ceremony for CGSC Deputy Commandant Maj. Gen. Stephen Maranian. After the ceremony she spent the remainder of the day with the School of Advanced Military Studies, first with seminar groups discussing diplomatic chief of mission perspectives, country team operations, interagency operations and expectations of ambassadors. In the afternoon she participated in a SAMS Interagency Panel, discussing interagency operations along with representatives from the CIA, Defense Intelligence Agency (DIA), U.S. Agency for International Development (USAID) and the National Geospatial-Intelligence Agency (NGA). She closed her first day with a dinner with CGSC senior faculty and trustees of the CGSC Foundation.

On Tuesday, Dec. 3, Ambassador Canavan visited Leavenworth High School spending time in an AP Government class talking to students about her career as an ambassador and her time in the peace corp. She also explained how ambassadors work in relation to the president. Later in the day she visited with students in a human psychology class at the University of St. Mary discussing human rights violations in the South African region.

The following morning, Ambassador Canavan visited Park University and spoke with a group of the university faculty and staff about security issues in Europe and answered current events questions about NATO and her career in the Foreign Service. Prior to speaking with the group, Canavan met with Erik Bergrud, Associate Vice President for University Engagement, and discussed current events and the history of Park University, paying special attention to their history with international students. While touring Park’s underground, Bergrud relayed the story of the Nisei students – Japanese-American students who attended Park University at the height of the Japanese-American internment camps during WWII.

In the afternoon of Dec. 4, Canavan spent time with the CGSC Foundation board of trustees at their quarterly board meeting in downtown Kansas City.

On the final day of her visit Ambassador Canavan traveled to the University of Kansas where she met with students in an undergraduate African Studies/Geography class speaking about her time in Botswana and later presenting to students and faculty in the African and African-American Studies Department speaking about current issues in Africa and her experiences in executing U.S. policy in that region. She also delivered a luncheon presentation at KU’s Intelligence Community Center for Academic Excellence (ICCAE) discussing the current operational environment in Africa, including extremism issues and also how an ambassador works with the intelligence community in country.

The purpose of the CGSC Foundation’s DACOR Distinguished Visiting Professor of Diplomacy program is two-fold — to enhance the interagency education of the U.S. Army Command and General Staff College students and faculty and to connect the American public with senior U.S. government officials. The program is part of the CGSC Foundation’s Distinguished Speaker Series and is the result of a partnership with the Diplomatic and Consular Officers, Retired, Inc. (DACOR) organization located in Washington, D.C. The program is sponsored locally by the Lawrence D. Starr Center for Peace and Justice at the University of St. Mary, Park University, and the University of Kansas.

Ambassador Canavan will return to Fort Leavenworth in mid-April for her spring term visit.

Ambassador Katherine Canavan served with distinction as a Foreign Service officer in the U.S. State Department more than 35 years. She retired in November 2011, with the rank of Career Minister, the second highest in the Foreign Service. She twice served as Chief of Mission (Republic of Botswana and the Kingdom of Lesotho), as the director of the Foreign Institute, and as the civilian deputy to the commander of U.S. European Command. She is a graduate of the National War College and has received numerous awards to include the Distinguished Civilian Service Award and the Presidential Meritorious Service Award.

Ambassador Canavan visits with the members of the CGSC Foundation board of trustees during their quarterly meeting Dec. 4, 2019. (photo by Mark H. Wiggins)