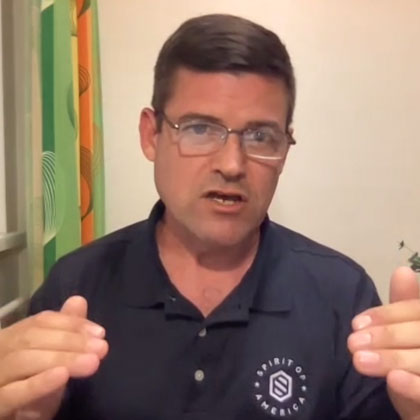 In this presentation of the Arter-Roland National Security Forum, retired Col. Matt Dimmick, the European Regional Program Manager for Spirit of America, provided a “Battlefield Update Briefing” from Moldova via Zoom on July 28, 2022.

Col. (Ret.) Matt Dimmick provides a briefing via Zoom on the war in Ukraine from his hotel in Moldova on July 28, 2022.

Speaking to the audience from his hotel in Moldova, Dimmick described how Spirit of America is supporting U.S. national security and foreign policy objectives in Ukraine, Poland, and Moldova. The current war in Ukraine has brought to the forefront the threat Russia presents and laid bare not only Russian capabilities and limitations but NATO’s vulnerabilities. Dimmick provided a unique “boots on the ground” perspective to the current war in Ukraine and the multi-national efforts surrounding it.

Dimmick served 29 years in uniform, retiring in 2021. He most recently served as Director for Russia and Eastern Europe on the National Security Council Staff during the Trump and Biden administrations. Previously, Matt was the Russia Director for the Secretary of Defense from 2016 to 2019. He also held the positions as Defense Attaché in Tbilisi, Georgia, Deputy Foreign Policy Advisor for the Chief of Staff of the Army, and Assistant Army Attaché in Moscow.

In addition to his recent work with Spirit of America, Dimmick has appeared on NBC, Bloomberg and Al Jazeera to provide analysis of the conflict in Ukraine.