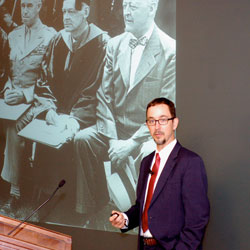 Mr. Patrick J. Wesner, the Command and General Staff College Distinguished Chair for Development Studies, led a discussion on the roles and missions of the United States Agency for International Development (USAID) in the seventh InterAgency Brown-Bag Lecture on April 6, in the Arnold Conference Room of the Lewis and Clark Center on Fort Leavenworth.

Wesner’s presentation covered the history of USAID from its predecessor organizations in the early 20th century to its establishment as a result of the Foreign Assistance Act of 1961 signed into law by President Kennedy. He brought the attendees up to date by discussing the agencies current roles and missions around the world.

“We [USAID] partner to end extreme poverty and to promote resilient democratic societies while advancing our [U.S.] security and prosperity,” read one of Wesner’s briefing charts. The same chart contained a graphic that showed the agencies presence in countries around the world.

Much of the discussion about USAID’s capabilities centered around the use of contracts to accomplish the work, whereas in the past, the agency was manned to a level that allowed it to do more of the work itself. – A trend, according to Wesner, that isn’t likely to change in the future given uncertain budgets and some of the advantages to putting people to work in their own countries.

A special attendee at Wesner’s presentation was Dr. Dirk Dijkerman who was visiting Fort Leavenworth as part of another Simons Center special speakers program. Dijkerman is a retired USAID Career Minister with a vast amount of experience in the agency, most notably serving as the Executive Coordinator for the U.S. Ebola Task Force in 2014-2015. He discussed the various interagency and international challenges and the methods he used to successfully address them in that operation. During his visit, Kijkerman not only participated in Wesner’s presentation, but also met with CGSOC students in several electives and with the faculty and students of Park University.

In addition to his role as CGSC’s chair for development studies, Wesner is a commissioned Foreign Service Officer with USAID. During his 12-year career with USAID, he has served in Washington D.C., Mozambique, Malawi, and Afghanistan, and has completed shorter assignments in Bolivia and Kosovo. He has also served as a Peace Corps volunteer in Ethiopia and as a Peace Corps trainer in Guatemala. Wesner previously worked for the U.S. Department of Labor as an international relations officer and as an educator teaching social studies. He is a graduate of the Advanced Strategic Leadership Studies Program in CGSC’s School of Advanced Military Studies, earning a Master of Military Art and Science degree, and has conducted extensive research on China’s growing engagement and influence in sub-Saharan Africa. Wesner also holds a master’s degree in international education from the School for International Training and a bachelor’s degree in sociology and history from Duquesne University.

This was the seventh presentation in the series, which is co-hosted by the CGSC Foundation’s Simons Center with the U.S. Army Command and General Staff School (CGSS). The InterAgency Brown-Bag Lecture Series is an extracurricular, interagency topic-focused series that is intended to help enrich the CGSS curriculum. All lectures in the series are free and open to the public. As the series moniker states, the lecture series is conducted in the traditional “brown-bag lunch” format. – Attendees are welcome to bring their own lunches into the conference room.

Visit the CGSC Foundation Flickr site for more photos from the lecture.