Ann Soby, director of operations for the Command and General Staff College Foundation, said she wants women to feel inspired, educated and motivated.

With this in mind, Soby pitched the idea of a Women’s Conference to the CGSC Foundation Board of Trustees last year and it was approved.

Inspire, educate and motivate is the theme for the first Women’s Conference hosted by the CGSC Foundation March 2-3 at the Frontier Conference Center. 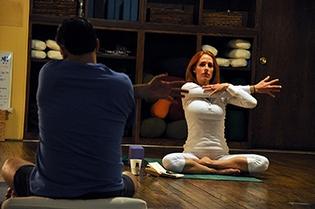 Click the photo for the original story and photos.

The event, open to all female active-duty service members, retirees and their spouses, U.S. and international spouses, government employees and contractors associated with Fort Leavenworth, offers informative sessions by community members and businesses on subjects of interest to women.

Soby led similar conferences while previously employed with Army Community Service. She said they were a success and hopes to see a great turnout at this year’s event as well.

Participants can sign up for one or both days of the conference. The first night, all participants attend painting, entertainment and dancing classes. The next day, participants choose from classes in four sessions. Class topics include de-cluttering, finance, meditation, women’s health, entrepreneurship, federal employment preference for military spouses, patio gardening, the Army Wellness Center, using oils and vinegars, personal and professional development, baking, and advice for parents on transitioning schools. The conference will close with remarks from the 2015 Armed Forces Insurance Military Spouse of the Year Corie Weathers.

Soby said she thought of the theme based off what she would want out of a conference.

Soby said the classes should be fun and educational. A few she is excited about include those on professional development and women’s health.

“We were able to get the former Kansas City Mayor Kay Barnes to come in,” Soby said. “She has managed to run Kansas City, Mo., and did a wonderful job with it. She had a lot of wonderful ideas that have now come true and she is now teaching a course for Park University. She’s going to teach a personal and professional development course. I think she will be able to bring what she’s done in her lifetime at a high level and what she did as a woman to be successful. Karla Robinson from Munson (Army Health Center) is going to talk about women’s health. I think we all think we take pretty good care of ourselves, but I do think she’s going to be able to give us more information and talk about women and heart issues.”

“I think it’s a great benefit because women attached to the military, we all have two things in common: the military and being women,” Johnson said. “Those are two good things to foster a fellowship between each other and find other similarities so that we can work with each other and better our community. I am a spouse of an active-duty soldier. I think it’s a great opportunity to meet other women in the community and also find out maybe something about yourself. There’s a lot of different programming. They can branch out and go to a segment or a session that is something they have never heard of before, something totally different, they can get out of their box a little bit and try something new and then the big part is meeting those other women in the community and making those connections.”

“I think it’s important to have it on the base so military soldiers have the opportunity to attend and women of the community have the opportunity to attend so they can come together and share ideas and information,” Bradford said. “At some point we are going to be retired women so we need to have all that information to continue to be successful.”

To register, visit www.cgscf.org. Registration is $25 for March 2, $30 for March 3 or $40 for both days. On-site child care is available March 3 only with limited spaces. Contact the Child Development Center to reserve a spot at 684-5138.

This article was orginally published Feb. 11 on www.ftleavenworthlamp.com.