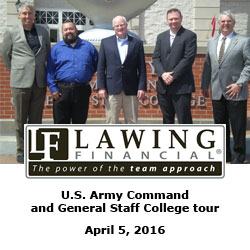 Lawing Financial is a financial services company headquartered in Overland Park, Kansas, that is centered on a team approach. The Foundation hosted three of their financial advisors on a tour of Fort Leavenworth and the Command and General Staff College on April 5, as part of the CGSC Foundation’s outreach programs.

During their visit the group also spent time in a classroom with Mark Gerges, the acting deputy director of CGSC’s Department of Military History. Gerges explained in more detail the rich history of CGSC and the improvements in technology in the classrooms.

As always during these “walk and talk” tours, Foundation CEO Doug Tystad led the group around the Lewis and Clark Center, home of CGSC, and spoke to them about the history of the college, its programs and notable U.S. and international alumni.

In the photo above: