CGSOC Class of 2016 – Persons of the Month for June 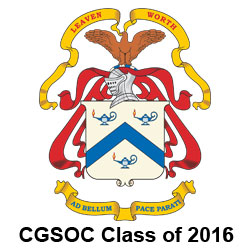 The CGSC Foundation has selected the 2016 graduating class of CGSC’s Command and General Staff Officer’s Course (CGSOC) as the Person(s) of the Month for June 2016. The class is scheduled to graduate June 10. 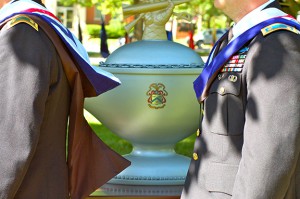 The CGSOC Class of 2016 is set to graduate June 10.-Click the photo for details about the international officer badge ceremony and the graduation ceremony.

to be proficient in land operations with other services, agencies and militaries around the world. CGSC and the CGSOC are renowned in the study of leadership, the conduct of joint and combined land warfare, and the application of joint, interagency, intergovernmental, and multinational operations and organizations in support of national objectives.

The education all CGSOC students receive is on a graduate-level, but they also have the opportunity to enroll in the Master of Military Art and Science (MMAS) degree program. Participation in the degree component of CGSOC is voluntary since many come to Fort Leavenworth with masters, doctorates or professional degrees already in hand, or in progress. In the 2016 class, 139 students will be awarded the MMAS. – In addition to successful completion of the core elements of the course, MMAS candidates must pass an oral comprehensive exam, and write, then orally defend, a thesis based on their original research.

In every event and opportunity the CGSC Foundation has had to host interactions between civilian visitors and the men and women that make up the CGSOC class of 2016, the visitors without fail have commented on how impressive they are. Whether they are a U.S. military officer, an interagency student or an international officer student, the visitors always come away with a newfound appreciation for the professionalism and commitment to excellence these students demonstrate.

Lest anyone think students at CGSC are normal graduate students, consider that out of the 1,307 in the class, more than 900 have deployed to combat operations or other military engagements around the world. – They have sacrificed, they have succeeded, and even failed on occasion, but they have persevered. CGSOC graduation is a milestone in their professional careers, but they leave Fort Leavenworth this month to head back out and do it all again…and then some.

For these reasons and many, many more, the CGSC Foundation salutes the Command and General Staff Officer Class of 2016 for their excellence and continued service to their respective countries.