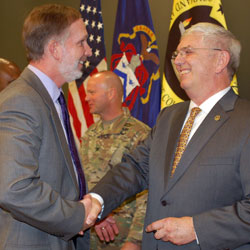 The Class of 2016 graduated and has mostly departed which put the College into its “summer rhythm.”  Most people assume that because the students have left, everyone goes on leave, takes leisurely strolls in the hallways, gets caught up on reading, and so forth. But the College really doesn’t slow down. It may appear that way because there aren’t students crowding the cafeteria, but the College rhythm continues with relatively little pause. Here’s why. 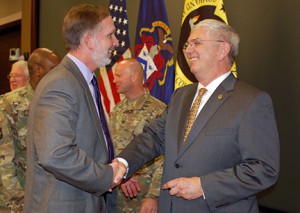 Foundation CEO Doug Tystad, right, thanks Dr. Scott Gorman from the School of Advanced Military Studies for his support of the National Security Roundtable Program in March 2016. The Foundation supports two NSRT programs each academic year along with faculty-led support from SAMS and the Command and General Staff School.

The weekend after graduation the Class of 2017 International Military Students began arriving almost immediately. The class is expected to be 114 officers from 88 countries, which will be one of the larger classes in recent memory. Two weeks later, the 141 Air Force, Navy, Marine Corps, and Coast Guard officers arrived, followed shortly by the 15 interagency students. After signing in and getting settled, both the IOs and the sister service students began orientation classes in order to prepare them to better speak “army.” The IO program has a number of events and trips planned to orient the international students to the area and our form of government.

The School of Advanced Military Studies began their courses of study on June 27, so they’re already back into the swing of education. There are actually three programs at SAMS, one for strategist candidates earning their doctorate degrees, one for War College students, and the one that most people associate with SAMS, which is the major’s course. We will do an in-depth look at SAMS as part of our CGSC 101 series of articles in our magazine this fall. – It is an amazing program. In addition, the School for Command Preparation (SCP) continues to conduct regular monthly pre-command courses for our incoming battalion and brigade commanders and command sergeants major. In addition, in late June SCP hosted a course for brigadier generals who were heading to operational assignments.

During this time, the faculty for the Command and General Staff Officer Course (CGSOC) – the major’s course – were able to take a bit of well-deserved vacation but the window was short. One of the keys to the success of CGSC is the system used to review and update the curriculum on a regular basis and the programs in place to prepare the faculty. Faculty Development Program (FDP) instruction has begun for the newly assigned instructors as well as the department FDP for the specific courses to be taught. I was privileged to observe some of the department FDP sessions and I came away impressed at the professionalism, dedication and enthusiasm of the faculty.

In addition to all this activity over the summer weeks, we must also recognize CGSC’s Department of Distance Education. Their work with students in distributed education programs online never stops.

Of course, the Foundation has also been busy over the past few weeks preparing for support to the next academic year. We are working to finalize details on the General Colin Powell Lecture Series presentation, which will be the first guest speaker for the class in Eisenhower Auditorium on Aug. 18. The Powell Lecture, sponsored by an endowment from Tri-West Healthcare Alliance, brings a speaker of great prominence in national and international security and strategy issues. This year, the lecture will be used to help set the stage for the strategy block of instruction. We are locking down the first General of the Armies John J. Pershing Great War Commemoration Series lecture, sponsored in part by a grant from Lockheed Martin Corporation for Sept. 14 on the Battle of the Somme. We are working very hard to sponsor the “Celebration of International Friendship” at the Kauffman Center for the Performing Arts on Sept. 16. At this major event we are pleased to present the international officer Class of 2017 and their spouses to the greater Kansas City Metropolitan area. This year we’re helping celebrate the 60th anniversary of People to People International, which was started by President Dwight Eisenhower (CGSC Class of 1926) and we have the world-renowned West Point Glee Club providing entertainment. Tickets go on sale in early August at the Kauffman Center box office so be on the lookout. – This is the third annual event and if the first two events are any predictor, this one will be exceptional!

We are looking forward to the upcoming academic year. We welcome all new students, faculty and staff. We hope that our support will enhance the academic experience throughout the year. Stop in and see us and let us know how we’re doing.