Faculty present on ethics in leadership 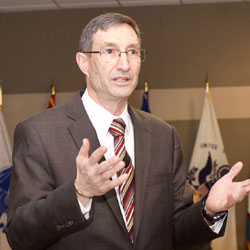 The eighth presentation of the InterAgency Brown-Bag Lecture Series for academic year 2019 featured Dr. Ted Thomas, director of the U.S. Army Command and General Staff College’s (CGSC) Department of Command and Leadership. Thomas was joined by Chaplain (Maj.) Jonathan Bailey, CGSC ethics instructor. The two presented on the topic of ethics in leadership on Mar. 5, in the Arnold Conference Room in the Lewis and Clark Center on Fort Leavenworth.

Dr. Ted Thomas (right) and Chaplain (Maj.) Jonathan Bailey present on the subject of ethics in leadership on March 5 in the Arnold Conference Room of the Lewis and Clark Center.

Thomas and Bailey reviewed examples of failure to ethically lead in both defense and business, including the 7th Fleet “Fat Leonard” and Wells Fargo scandals, and posed the question “how does one drift from their espoused values in immoral or unethical dealing?”

Dr. Ted Thomas is the director of the Department of Command and Leadership in the Command and General Staff College at Fort Leavenworth, Kansas. He graduated from the United States Military Academy in 1978 and served 20 years in various command and staff positions in the U.S. Army before retiring as a lieutenant colonel with his last assignment as battalion commander of the 554th Engineer Battalion. He received a master’s in Civil Engineering (1986) from the University of Illinois, and a doctorate in Engineering Management (1998) from Missouri University of Science and Technology. He joined the CGSC faculty in 2005 and has served as the director of the department since 2007.

The InterAgency Brown-Bag Lecture Series is co-hosted by the CGSC Foundation’s Simons Center with the U.S. Army Command and General Staff School (CGSS). The series is an extracurricular, interagency topic-focused series that is intended to help enrich the CGSS curriculum. The presentations are scheduled each month. – The next lecture is Apr. 3, 2019, featuring a presentation on the Central Intelligence Agency. The CGSC Foundation and the Simons Center have received support for all brown-bag lectures in academic year 2019 from First Command in Leavenworth, Kansas.