Fort Leavenworth inducted four new members to its Hall of Fame on May 20, 2021, at the Lewis and Clark Center.

The Hall normally inducts two persons each year. However, no ceremony was held in 2020 due to COVID precautions. The selectees for 2020 and 2021 are being inducted in this ceremony.

“I’d like to thank all those involved in making today’s event a truly professional ceremony that honors four remarkable leaders who have positively contributed to the history, heritage and traditions of Fort Leavenworth and the United States Army,” said Maj. Gen. Donn Hill, Combined Arms Center deputy commanding general for education and Command and General Staff College deputy commandant. “All of these great Americans have led change during some difficult times in our nation’s history. Today’s hallmark ceremony will continue to preserve their untiring efforts and contributions to make the Army and Fort Leavenworth a better place to work and live.”

Gen. Leonard T. Gerow was a communications officer in France in World War I andcommanded the 29th Infantry Division, V Corps, and the 15th Army in World War II. He was the Commandant of the Command and General Staff College in 1945 and then headed a commission to reform Army education. In 1954 he was recalled to active duty and served on the Army Logistical Support Panel during the Korean War.

Retired Lt. Col. Jade Hinman offered some of Gerow’s biography in a pre-recorded video message during the ceremony. Hinman, while attending the School of Advanced Military Studies, wrote his Master of Military Arts and Sciences monograph on Gerow. The monograph was titled: “When the Japanese Bombed the Huertgen Forest: How the Army’s Investigation of Pearl Harbor Influenced the Outcome of the Huertgen Forest, Major General Leonard T. Gerow and His Command of V Corps.”

“I’m honored to be here today helping to induct into the Fort Leavenworth Hall of Fame one of the most unsung and deserving inductees,” Hinman said. “His legacy deserves this honor.”

Brig. Gen. Elizabeth P. Hoisington was commissioned in the Women’s Army Auxiliary Corps in 1943. She served in Europe in World War II and supported President Truman’s attendance at the Potsdam Conference. She remained in Europe as the personnel officer for 6th Army and at Supreme Headquarters Allied Powers Europe. She later commanded the Women’s Army Corps Center at Fort McClellan, Alabama and then served as the Director of the Women’s Army Corps. She was the second woman promoted to brigadier general.

“I remember very well reading the headline in the Washington Post: ‘The general is a lady,’ and how extraordinary that news was at the time. … Aunt Elizabeth entered the Army when women were auxiliaries rather than soldiers and left it when women were present at every rank and almost every specialty. She went in as a private and came out as a general,” Brown said. “The progress women have made since her time and the progress which remains to be made in no way diminishes the scope of her generation’s contributions. She was at the forefront of these changes throughout her career

Commissioned in 1961, Brig. Gen. Sherian G. Cadoria served in Vietnam as an administrative officer for the Provost Marshal’s office. She was the first African-American woman to graduate from the Command and General Staff College and the Army War College. She commanded the 1st Region, U.S. Army Criminal Investigation Command and was the 1st African-American woman promoted to brigadier general. She was Deputy Commanding General and Director for Mobilization and Contingency Operations for the Total Army Personnel Command when she retired in 1990. 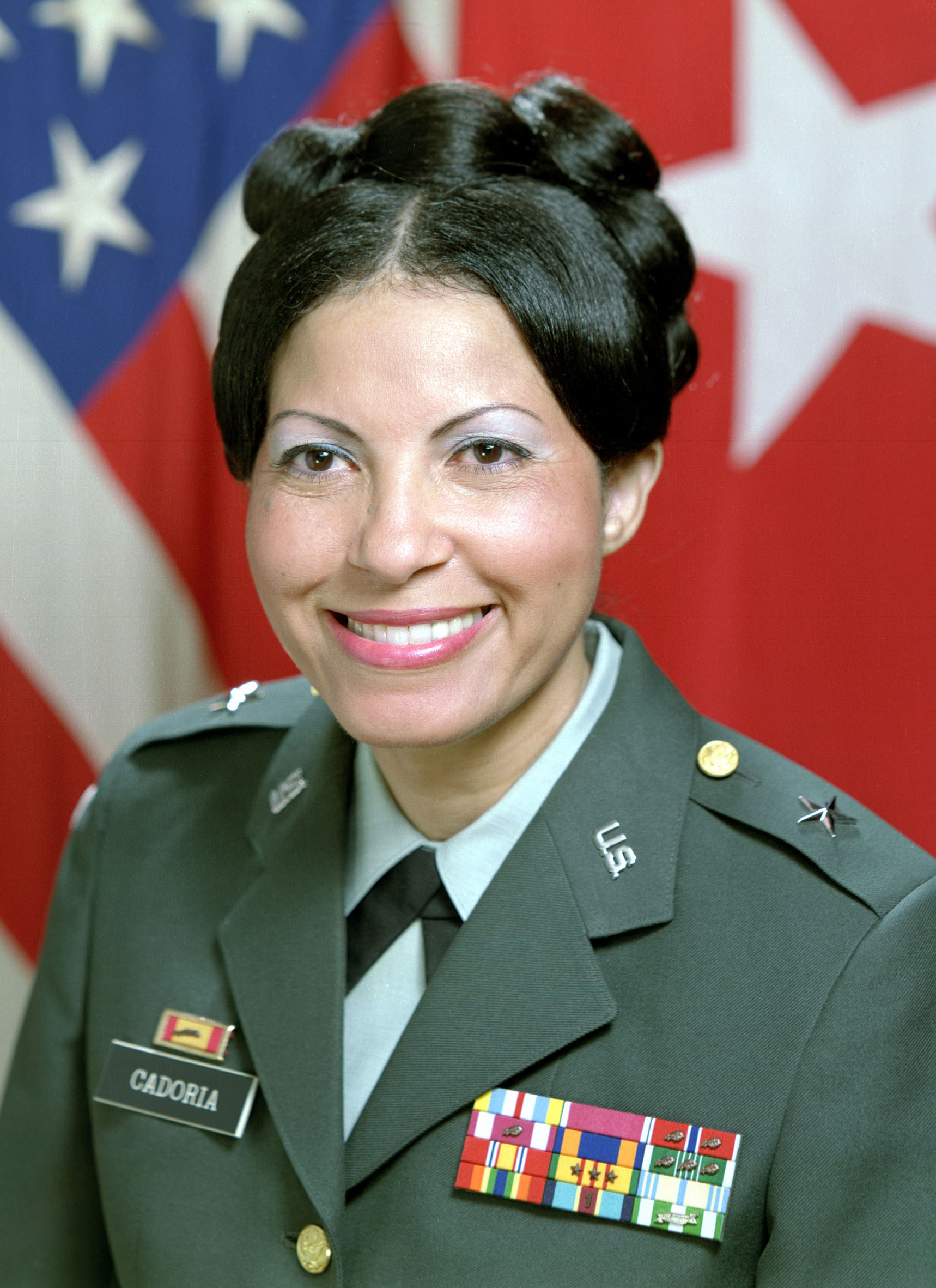 In her remarks during the ceremony Cadoria told stories of difficulties she faced serving as a Black female soldier including being the only one left standing during the officer training course after the other three Black women quit and being called a “straggler” when arriving in Vietnam because they didn’t know what to do with a female soldier. But, she said, classmates, fellow soldiers and senior officers, including Hoisington, became her allies.

“Today, my heart is full, but I want all of you in here to know that no matter what you do, do it well” Cadoria said. No matter what anybody says to you, you stand up to them even if you end up being the only person standing up in the end,” she said. “Don’t ever let anybody cause you to go astray when you want to do something really good and improve yourself. … Work together, be strong.”

Mrs. Elizabeth Schenck Smith is the second civilian inducted into the Hall. She accompanied her husband when he attended the School of the Line and then the General Staff School at Fort Leavenworth from 1919 to 1921. After passage of the 19th Amendment, she led a group that lobbied for reforms that enabled military wives to vote. Later, she established the Fort Leavenworth Women’s Club, the forerunner of today’s Fort Leavenworth Spouses’ Club (FLSC). She was also a founder of the Fort Leavenworth Parent Teacher’s Association.

“Here we are, 100 years later. The message (of the FLSC) has changed over the years, but the overall principle remains: Improve the quality of life for those around you,” Alvarado said. “Mrs. Schenck-Smith improved the lives of many. … Today, the members of the … FLSC are dedicated to improving the quality of life to our members, Fort Leavenworth, the surrounding communities and the greater military.”

Hall of Fame members are honored by shadow boxes displayed in the Atrium of the Lewis and Clark Center. The Hall is organized in eras. Brig. Gen. Henry Leavenworth and explorers Meriwether Lewis and William Clark are included in the pre-Civil War era. The Civil War to World War I era sees Maj. Gen. James Bell, one of the early proponents for professional military education, Maj. Gen. Fox Conner, mentor for many of the leaders of the U.S. Army in World War II, and Brig. Gen. Benjamin Grierson, Commander of the 10th Cavalry, The Buffalo Soldiers. The World War I and II era features the only American Soldiers to wear five stars, Generals of the Army Henry H. Arnold, Omar Bradley, Dwight D. Eisenhower, Douglas MacArthur, and George C. Marshall. The Korea, Vietnam and Cold War era includes Lt. Gen. Robert Arter, staunch advocate for professional military education and CGSC, Gen. William DePuy who was the first commander of the Army’s Training and Doctrine Command, Col. Roger Donlon, Leavenworth resident, who as a lieutenant was the first Medal of Honor recipient in Vietnam, and Gen. Colin Powell.

The full membership of the Hall of Fame can be viewed at: https://carlcgsc.libguides.com/HOF

Read the story on the Fort Leavenworth Lamp website.