Foundation reaches out to KC metro in special event 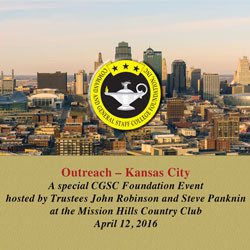 The CGSC Foundation conducted an outreach event April 12, 2016, to inform/educate Kansas Citians on the U.S. Army Command and General Staff College and the CGSC Foundation. Foundation Trustees John Robinson and Steve Panknin were the hosts of the event conducted at the Mission Hills Country Club. Nearly 60 guests were in attendance, including Fort Leavenworth Commander/CGSC Commandant Lt. Gen. Robert B. Brown and several U.S. Army officers who are currently students in CGSC. 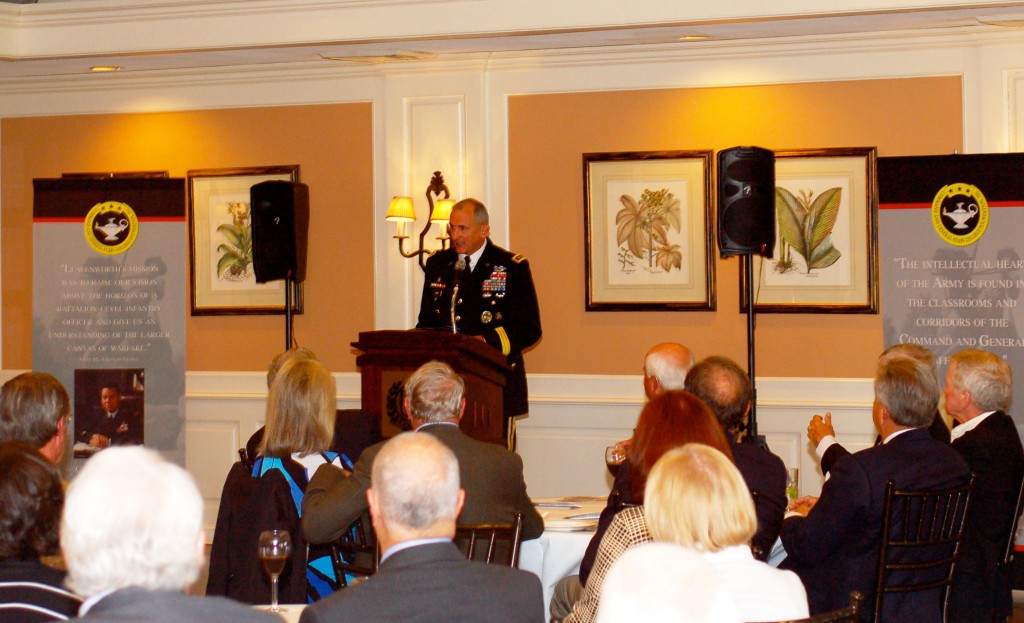 Lt. Gen. Robert B. Brown delivers remarks during the Foundation outreach to KC event April 12. Click the photo to see all the photos from the evening.

The evening began with a reception where guests had the opportunity to socialize with the Foundation trustees and Army officers present and view the informational displays in the room. After the reception period, Foundation trustee John Robinson provided welcoming remarks followed by remarks from Foundation CEO Doug Tystad, who spoke briefly about the Foundation and the College and introduced Lt. Gen. Brown.

Brown captivated the audience for more than 30 minutes, speaking on wide variety of topics, but always focusing on the adaptability and innovative qualities of the American Army leader and the importance of Fort Leavenworth and CGSC in the development of those leaders. He concluded by thanking the Foundation and also made a personal request for all those in the room to get involved and come visit the College. Foundation Chairman Lt. Gen. (Ret.) John Miller concluded the formal remarks with a very powerful, but elegant call to action for everyone in the room to get involved and to visit the College.

The evening concluded with special introductions of the CGSC Army officer students in the room introducing themselves, with Lt. Gen. Brown asking each one how many combat rotations each had. The guests stayed well after the end of the formal portion of the evening to converse with Lt. Gen. Brown, the officer-students, and Foundation trustees and staff.

Special thanks go to Foundation trustees John Robinson and Steve Panknin for their personal support of this event.

Click here for all the photos from the evening.