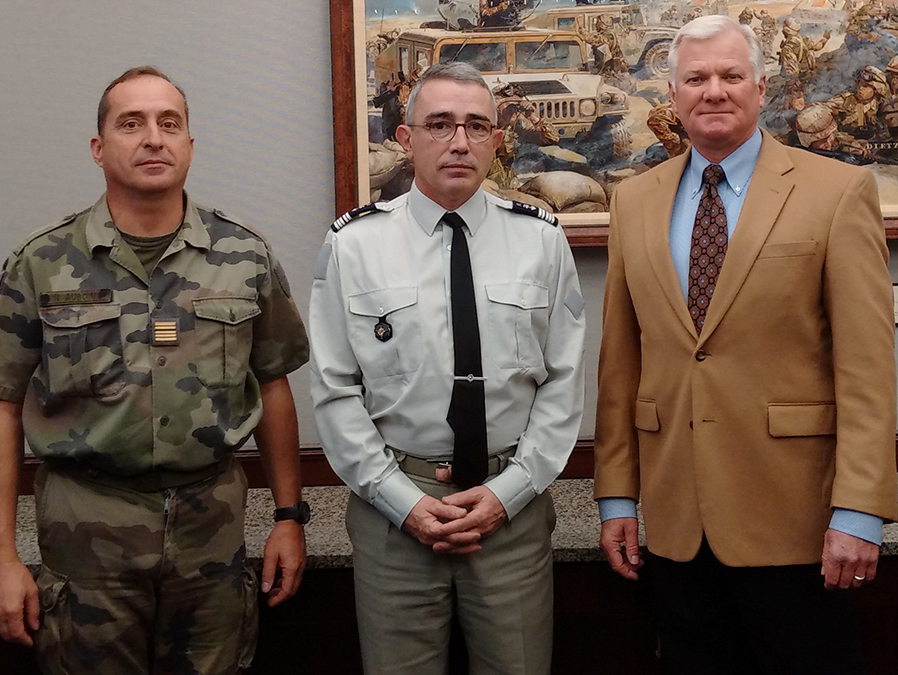 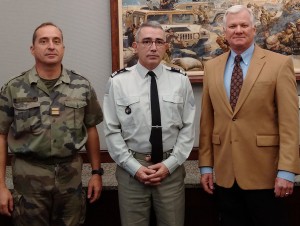 Col. Thierry Noulens (center in the photo), professor at the Ecole de Guerre Superiere, the French Army War College, visited the Command and General Staff College in October while he was in the United States participating in the Association of the United States Army (AUSA) Annual Meeting and Exposition in Washington, D.C. Mr. Jeff LaMoe, CGSC’s chief of staff (right in the photo) was one of the colonel’s hosts.

Retired General Gordon R. Sullivan, AUSA’s president, invited Col. Noulens to participate in the AUSA Annual Meeting Oct. 12-14, as part of AUSA’s book program and expressed interest in having him visit the Command and General Staff College while he was in the United States.

Colonel Noulens is a Professor at the Ecole de Guerre Superiere , the French Army War College, holds a Ph.D. in Military History, is an expert on World War I and teaches Military History and Strategy. He is in the permanent military education track in the French Army and is assisting AUSA with books for the U.S. Army. He helped AUSA create an operational level staff ride for the battle of the Marne. AUSA invited him to the annual meeting to participate in their author’s forum, as well as to see military history at the U.S. Army War College, at the Military History Institute and also to participate in a U.S. Army Staff Ride. During his visit to Fort Leavenworth, Col. Noulens met with members of the CGSC Department of Military History and the Combat Studies Institute, received a virtual staff ride and spoke to leaders about the Command and General Staff College and the Army University Concept.