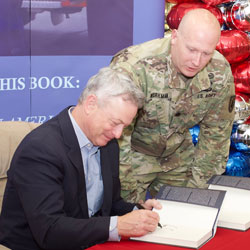 Gary Sinise, the well-known actor and leader of the “Lt. Dan Band,” philanthropist, and now author of a new book entitled Grateful American, conducted a meet and greet at the Fort Leavenworth Post Exchange on Feb. 25 from 9-10:30 a.m., to autograph copies of his book. The event was co-hosted by the Exchange and the CGSC Foundation. 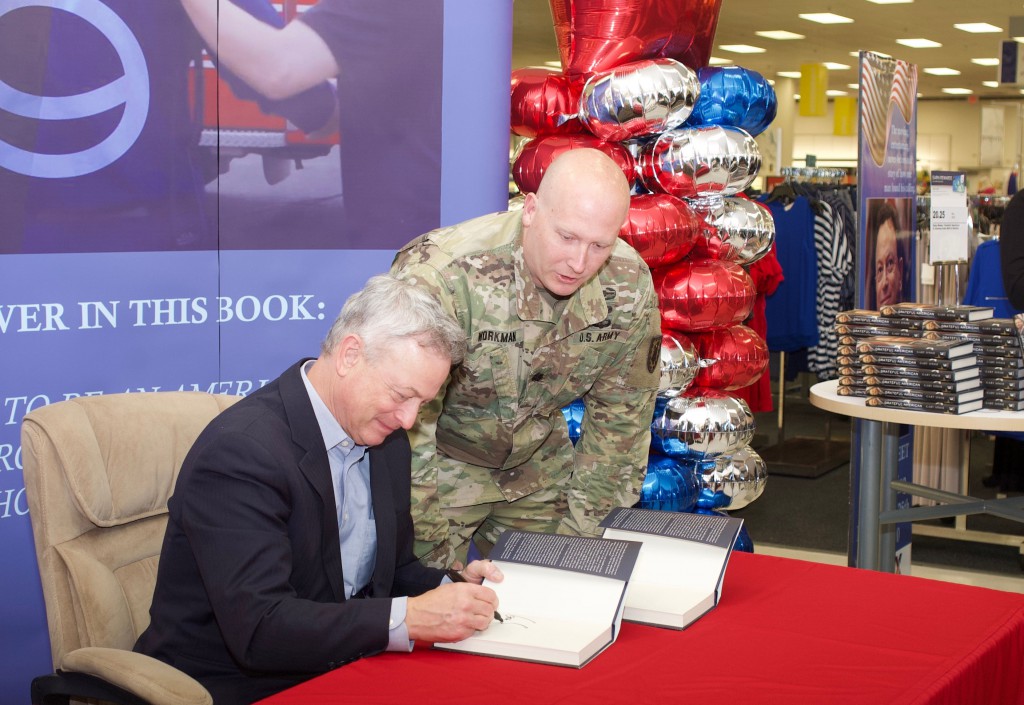 Gary Sinise, the well-known actor, leader of the “Lt. Dan Band,” and philanthropist, autographs a copy of his new book “Grateful American” for a Soldier at the Feb. 25 meet and greet at the Fort Leavenworth Exchange.

Both Rod Cox, president/CEO of the CGSC Foundation, and Mary Omler, general manager of the Fort Leavenworth Exchange, were pleased with the turnout.

“We had people starting to form a line before 7 a.m. this morning,” said Omler. “In the end we sold nearly 500 copies of Gary’s book and estimate that there were a little more than 300 customers that went through the autograph line.”

Soldiers, family members, veterans and others from the Fort Leavenworth community waited patiently in a line at the PX that snaked down the hallway and back again as Sinise signed copies of his book and took photos with each person in line. Nearly every participant had a story about some connection with Sinise, and all of them seemed grateful for the opportunity to meet the man who is very highly regarded in the military community.

The CGSC Foundation was first introduced to Sinise in 2011 by Foundation Trustee Mike Myer, who was also present at the book signing and spent a few moments with Sinise before the event. Myer had met Sinise in 2004 through his work at the VFW Foundation that was supporting one of Sinise’s projects – Operation Iraqi Children – at that time. Later, on May 5, 2011, Sinise was back in Kansas City to accept the 2011 Harry S. Truman Good Neighbor Award, and Myer brought him up to Fort Leavenworth to tour CGSC the next day. During that tour, then Foundation CEO Bob Ulin presented Sinise with a photo of his brother-in-law from the CGSC class yearbook, and along with CGSC leadership, helped tell Sinise the story of Lt. Col. Boyd McCanna “Mac” Harris’ influence on the Army.

Fast forward to three years later in 2014, Sinise and his wife Moira had decided to endow the “Lt. Col. Boyd McCanna “Mac” Harris Leadership Award” at CGSC in honor of his wife’s brother. Lt. Col. Harris was the primary author of the Army’s Field Manual 22-100, “Military Leadership,” in which he wrote the framework of the “Be, Know, Do” concept that is still so well-known today. The Sinises came to Fort Leavenworth and presented the inaugural award during CGSC graduation on June 12, 2014. The Foundation manages the endowment for the award.

“We were pleased to be able to host Gary here at Fort Leavenworth and celebrate his new book,” said CGSC Foundation CEO Rod Cox. “We want to make sure we honor our relationship with him and keep the memory of his brother-in-law alive by recognizing outstanding leadership in each class with the Mac Harris Leadership Award.”

After the book signing, Cox escorted Sinise to downtown Kansas City to a luncheon during which he was presented with the inaugural “Colonel Roger H.C. Donlon Patriot Award” by the Greater Kansas City Chapter of the Association of the U.S. Army. Donlon, was a founding trustee of the CGSC Foundation and a former member of the CGSC faculty before his retirement. He was the first Soldier that served in Vietnam to receive the Medal of Honor and the first Special Forces Soldier to be so honored. The Donlon’s have been friends with Sinise for years, having met him through his work with the Medal of Honor Foundation and wanted to show their appreciation for all of his support for service members and their families through this award.

Visit the CGSC Foundation album on Flickr for more photos.

One thought on “‘Grateful American’ returns to Fort Leavenworth”

One thought on “‘Grateful American’ returns to Fort Leavenworth”