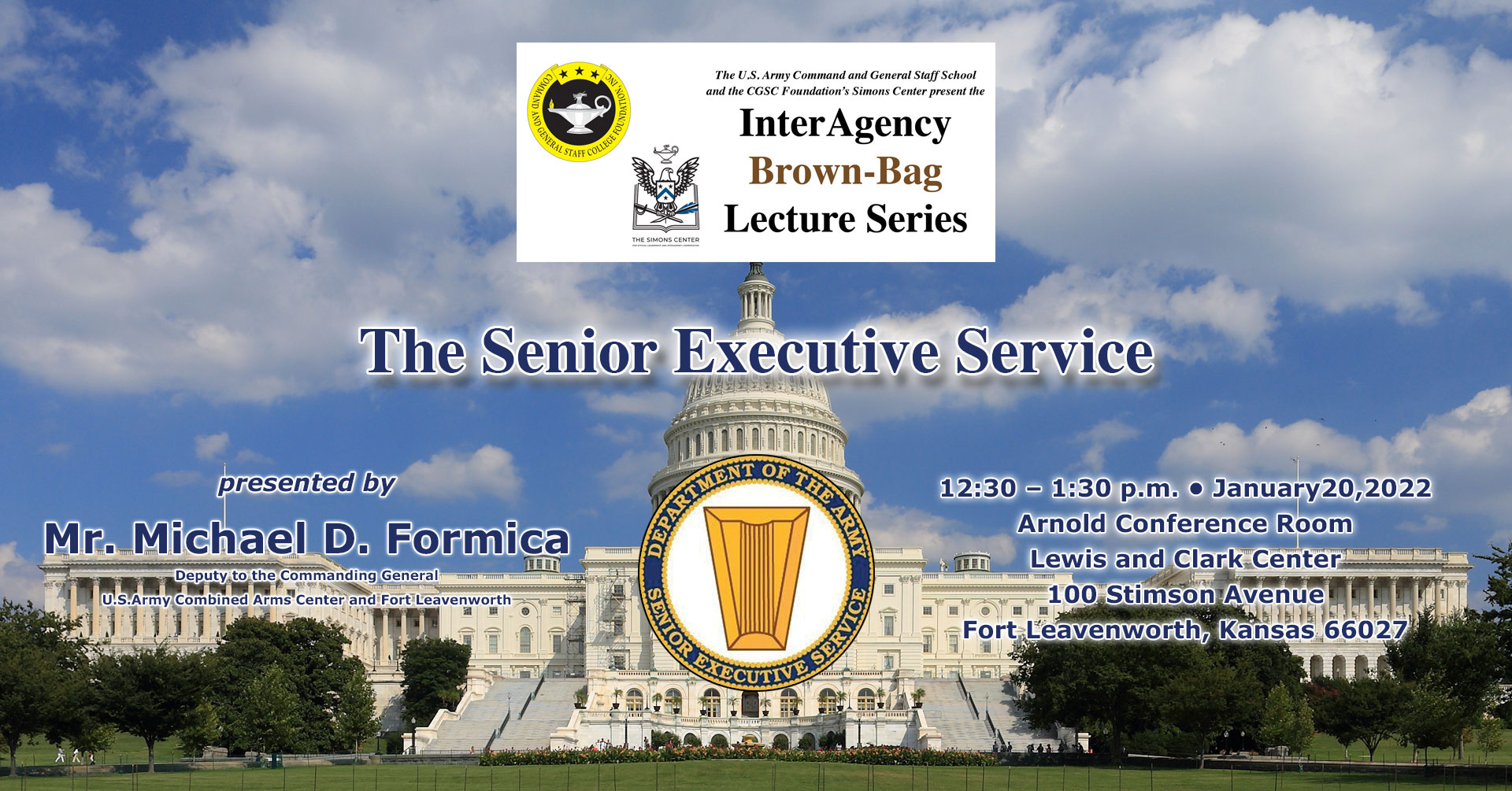 The fourth presentation of the InterAgency Brown-Bag Lecture Series for CGSC academic year 2022 will be conducted at 12:30 p.m., Jan. 20, in the Arnold Conference Room in the Lewis and Clark Center on Fort Leavenworth.

Mr. Michael D. Formica, deputy to the commanding general, U.S. Army Combined Arms Center and Fort Leavenworth, will lead a discussion about the Senior Executive Service – its origins, roles and responsibilities, and the selection process. He will also discuss the Army Civilian as a member of the Army Profession and the critical role civilian professionals play in national security.

Please Note: Normally, all lectures in the InterAgency Brown-Bag Lecture Series are free and open to the public and as the series moniker states, the lecture series is conducted in the traditional “brown-bag lunch” format in which attendees are welcome to bring their own lunches into the room. Unfortunately, due to COVID-19 restrictions members of the public are not currently allowed visitation in the Lewis and Clark Center, nor can the attendees bring food or drinks into the auditorium. Attendance will be restricted to Army University/CGSC faculty, staff and students. For those unable to attend, the presentation will be videotaped and later posted on the Foundation’s website, YouTube channel and Facebook page.

Mr. Michael D. Formica was selected to the Senior Executive Service in 2010 and has served as the deputy to the commanding general, Combined Arms Center and Fort Leavenworth since 2019. Previously he served as the director, U.S. Army Installation Management Command, Europe from 2015-2019, and as the assistant deputy chief of staff G-3/5/7 and deputy G-3 for training, U.S. Army Training and Doctrine Command, Fort Eustis, from 2010-2015. Formica retired from the U.S. Army in 2009 as a colonel after 27 years of service with duties that included service as the chief of staff and director, Joint Training and Operations Directorate, Joint Forces Command, and as the commander 2nd Brigade Combat Team, 1st Cavalry Division, during Operation Iraqi Freedom II.