Join us for the 5th Annual Celebration of International Friendship

We are pleased to be able to present the 5th Annual Celebration of International Friendship at the Kauffman Center for the Performing Arts on Oct. 4 starting at 7 pm. We hope you’ll join us!!! Tickets are still available at the Kauffman Center box office and they’re really quite reasonable. Our Honorary Chair for the event is Mrs. Mary O’Connor, Vice President for Country Club Bank in Kansas City.

The Celebration began five years ago as a partnership between the Foundation and the International Military Student sponsor organizations Kansas City Chapter of People to People and Operation International of the Leavenworth-Lansing Area Chamber of Commerce. We dedicated the event in the memory of David Beaham, one of our founding trustees and forever a champion of the International Military Student program. We chose the performing arts center because of its splendor and charm and we chose to go black tie/dark suit so that the international officers could showcase their country’s uniforms and native costumes. The first year we featured Park University Center for International Music chamber musicians; the second and third years we featured the West Point Glee Club; and last year we featured the U.S. Army Chorus. This year, the Grammy Award winning Kansas City Chorale will be providing an international selection of songs from some 15 different countries in their welcome to the students. The musical entertainment is a fitting tribute to the international student program and showcases Kansas City’s international flavor.

There are few cities in the world that can boast of an event where the officers of 88 different countries (87 countries in the Class of 2019 plus U.S. officers from each of the services) are introduced as friends and allies in one place. I have marveled each year at the officers that have crossed the stage to applause. These are future world leaders and they’re making memories right here in Kansas City. 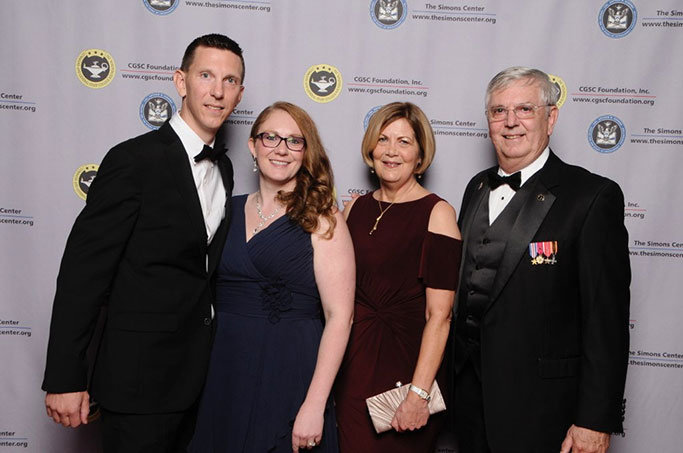 The Tystad family on the red carpet at the 2017 Celebration of International Friendship.

The program begins with a reception in the grand hall at Kauffman where you get the chance to mingle with the officers. Then we will move into the Muriel Kauffman Auditorium for introductions and then the Kansas City Chorale. Don’t be in a hurry to leave, we’ll have coffee, tea and cookies in the grand hall after the event so you can continue to meet and greet. Throughout the reception, the intermission, and the cookie and coffee session, we will have the very popular red carpet photographer taking free pictures of the attendees. This is your opportunity to get a picture of you, your significant other, and a new international friend on the red carpet in a picture that you can treasure for life.

This year we’re being joined by the most recent inductee into the International Hall of Fame. The Army Chief of Staff of the United Arab Emirates will be inducted in the morning at Fort Leavenworth and will attend in the evening. We will also have a number of state National Guard Adjutants General or their deputies. The international student program at CGSC includes 16 students this year from countries that participate in the National Guard State Partnership Program. This program teams U.S. states with large immigrant populations from specific countries with the state National Guard units for cultural and military exchanges. The Adjutants General will be visiting to meet their students earlier in the day.

As you can imagine, an event this big in a venue this nice doesn’t come cheap. While ticket sales help defray the costs, we rely on the generosity of our sponsors to help underwrite the event. We’re especially pleased to have the Tim and Karen Carlin Foundation, the JE Dunn Family Foundation, Country Club Bank, the Duracomm Corporation, FedEx, Park University, and the West Family Trust as our major sponsors. We’re fortunate to have more than 35 total sponsors ranging from individuals to major corporations. We will list and celebrate our sponsors at the event, on our website, and in our magazine. I want to say thank you to all of those that have made this evening possible.

I hope you can join us, I believe you’ll find this a memorable, enjoyable evening.