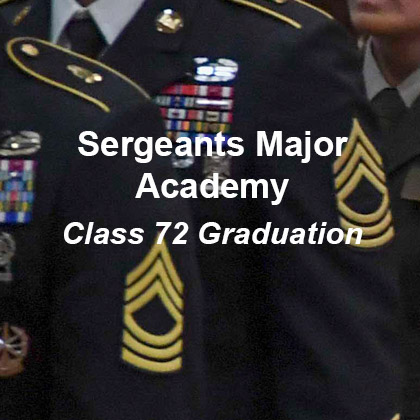 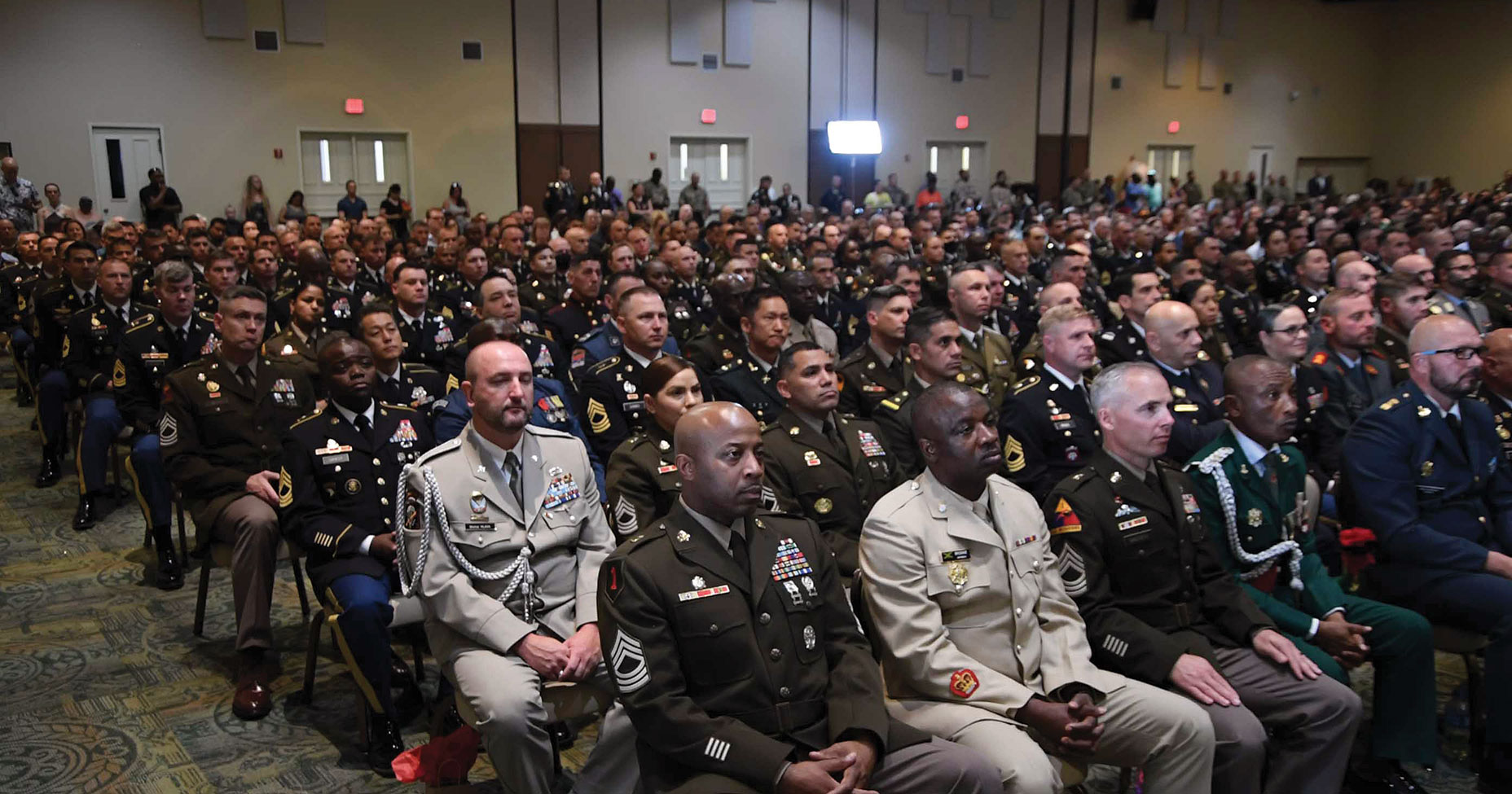 The NCO Leadership Center of Excellence and Sergeants Major Academy hosted a graduation celebration June 17 for the 521 students of Sergeants Major Course Class 72. The event was conducted in two sessions at the Fort Bliss Centennial Banquet and Conference Center to accommodate the students and their guests. 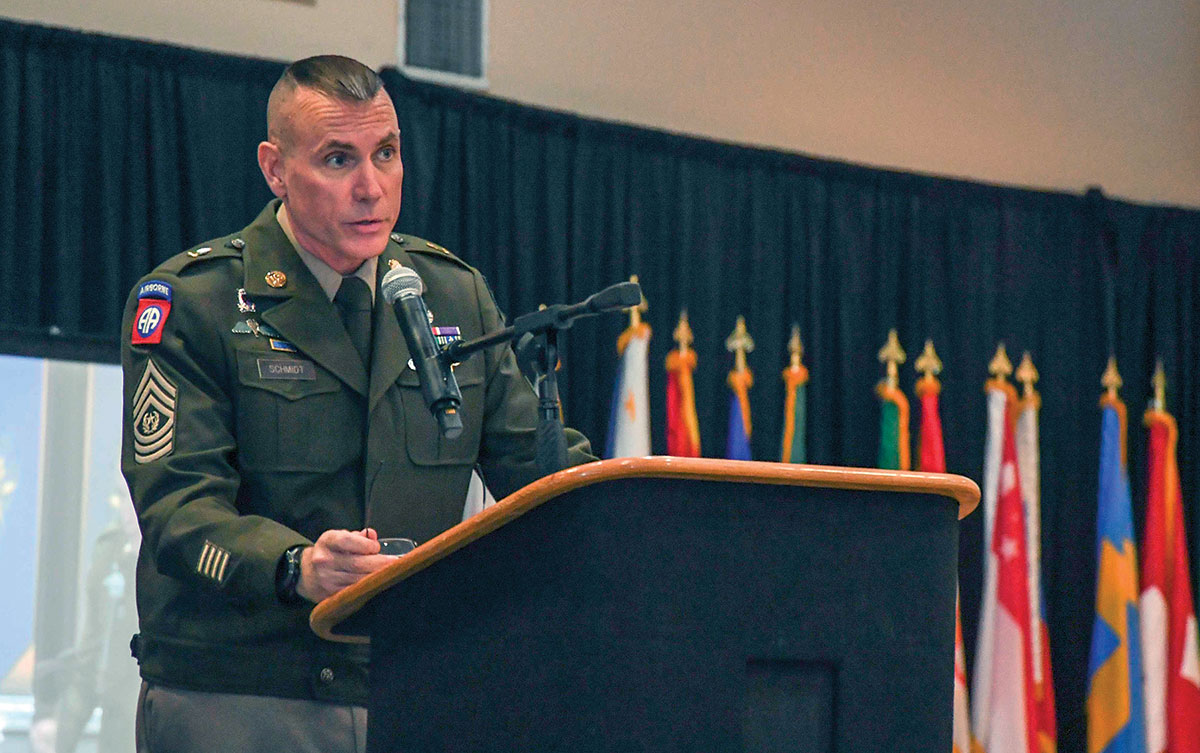 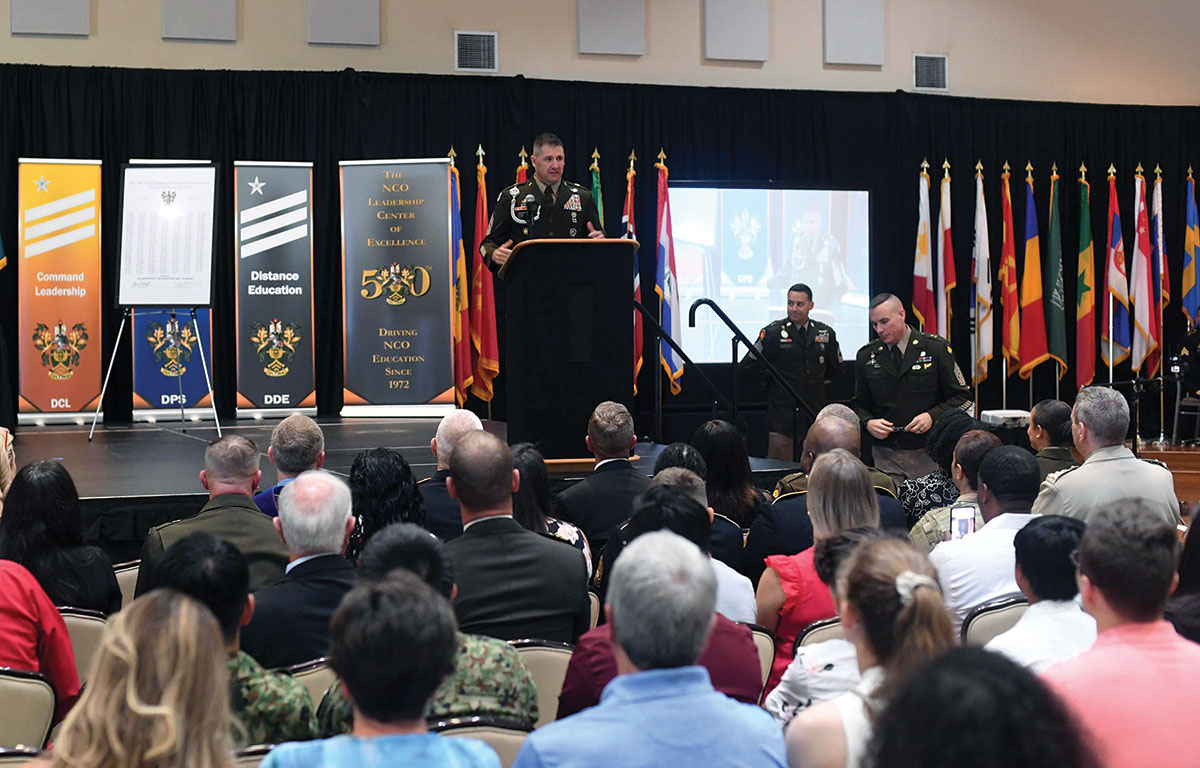 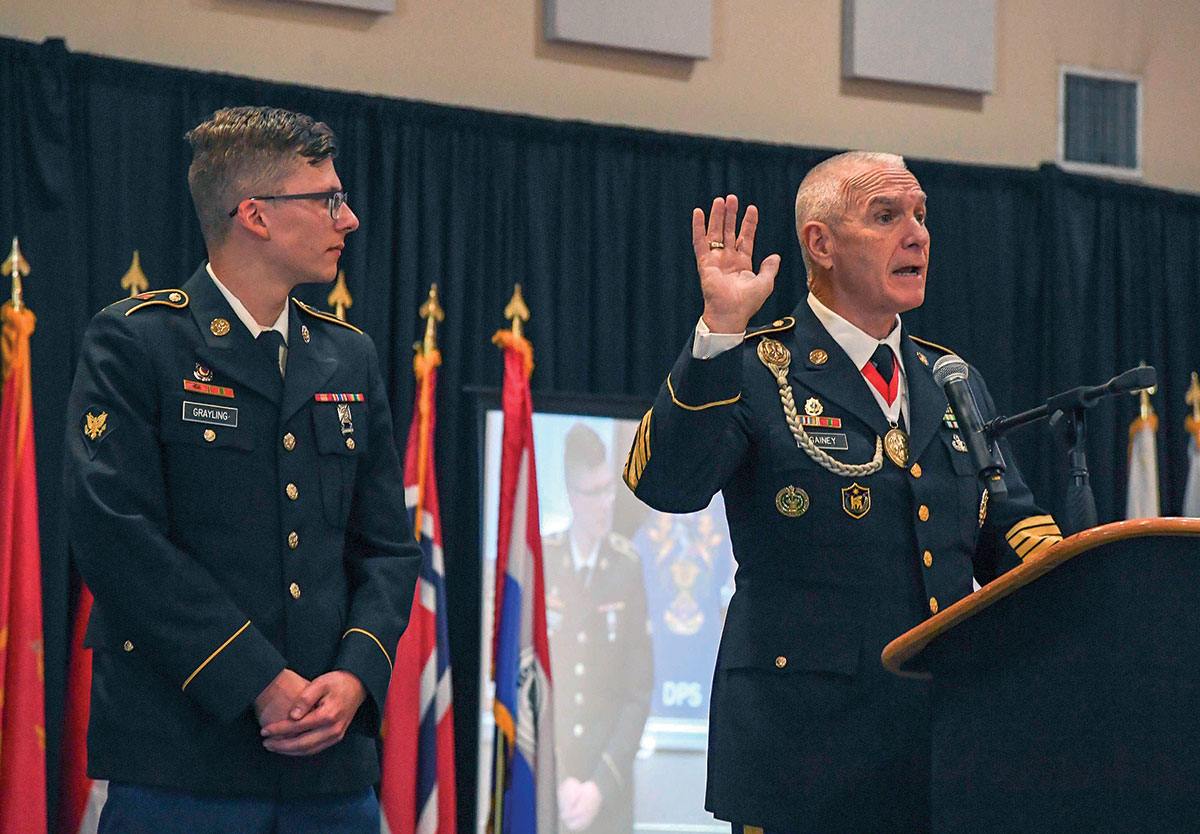 Senior Enlisted Advisor to the Chairman retired Joe Gainey (right) provided his guest speaker address to Sergeants Major Course Class 72 during the afternoon session. Gainey used Spc. David Grayling of the 1st Armored Division Band as a live representation for his speech to illustrate what the student’s legacy is – the Soldiers they will mentor. 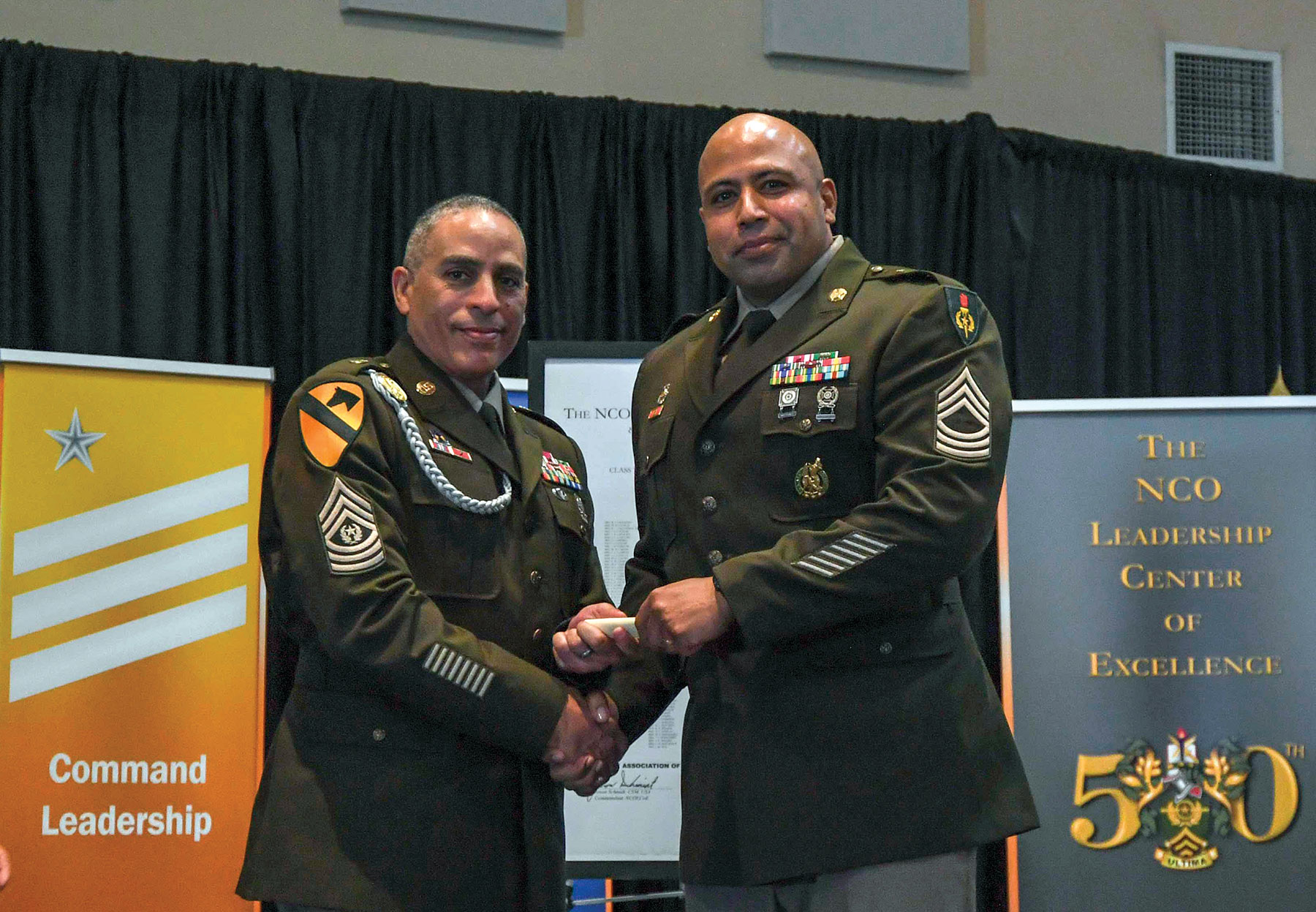 Host for the event was Command Sgt. Maj. Jason Schmidt, commandant of the NCOLCoE and SGM-A.

“This is a great week,” Schmidt said, noting all the ceremonies and celebrations leading up to graduation. “You have been waiting for this day. Leadership told you that you had earned the trust of others to get here. That your job was to maintain that trust and do your very best to make it all the way to graduation. You took that trust and turned it into your motto – ‘Trust and Inspire’ and here you are today, ready to graduate.”

Hendrex thanked all the families for their attendance and noted the students would not be graduating without the efforts of the instructors, cadre, and staff. He also noted the many international partners in attendance along with the international students.

Hendrex acknowledged the diversity of Class 72 and its accomplishments prior to attending the Sergeants Major Course (SMC) and their motto “Trust and Inspire”.

“How unique you are and what you brought to the table on the front end. We have given you a foundation to go out and truly impact the Army,” he said. “Be the Soldier with real experience. You will always learn more from your mistakes than you will from your successes. Soldiers will always do great things for you when there is trust. When they trust you they will do anything for you.”

Hendrex ended his remarks with some challenges.

“Don’t be afraid to bring up your faults. This is never about you, it is always about your Soldiers – it’s about the team. Be honest in everything you do and grow to hate liars,” he said. “Take responsibility, take charge and take the initiative because you have to make it happen.”

The guest speaker for the second session was the first Senior Enlisted Advisor to the Chairman, SEAC retired Joe Gainey. Gainey brought a young specialist from the 1st Armored Division Band on stage and told the graduates the Soldier was their legacy.

“Who you are does not mean who you are. Your legacy is not you as a person,” he said. “All the young men and women like this Soldier in the Army is your legacy. The Soldiers you are about to serve are your legacy. Forget about who you are, you are no better than this Soldier.”

Gainey then provided the graduates with four letters “R – A – A – A” to go by. “What does that stand for?” he asked.

“Every Soldier wants what is called Responsibility. To give him responsibility costs you nothing,” Gainey said. “I need to give him Authority to be responsible. Then you have to hold them Accountable for their actions because he (or she) is going to hold you accountable for your actions.”

Gainey continued, “You have to Assist them when they need help. Everybody makes mistakes, honest, human mistakes. We need to take corrective action but do it in a way he or she learns something, and you don’t destroy who they are.”

Gainey explained the NCOLCoE and SGM-A have given Class 72 the resources and knowledge to lead, it’s now their responsibility to “Throw out your rope of knowledge and pull the Soldiers up the hill. You need to coach, teach, mentor and train your Soldiers, because if you don’t train me to do the task, you have failed me.”

Gainey ended his remarks stating the no one is perfect in this room. 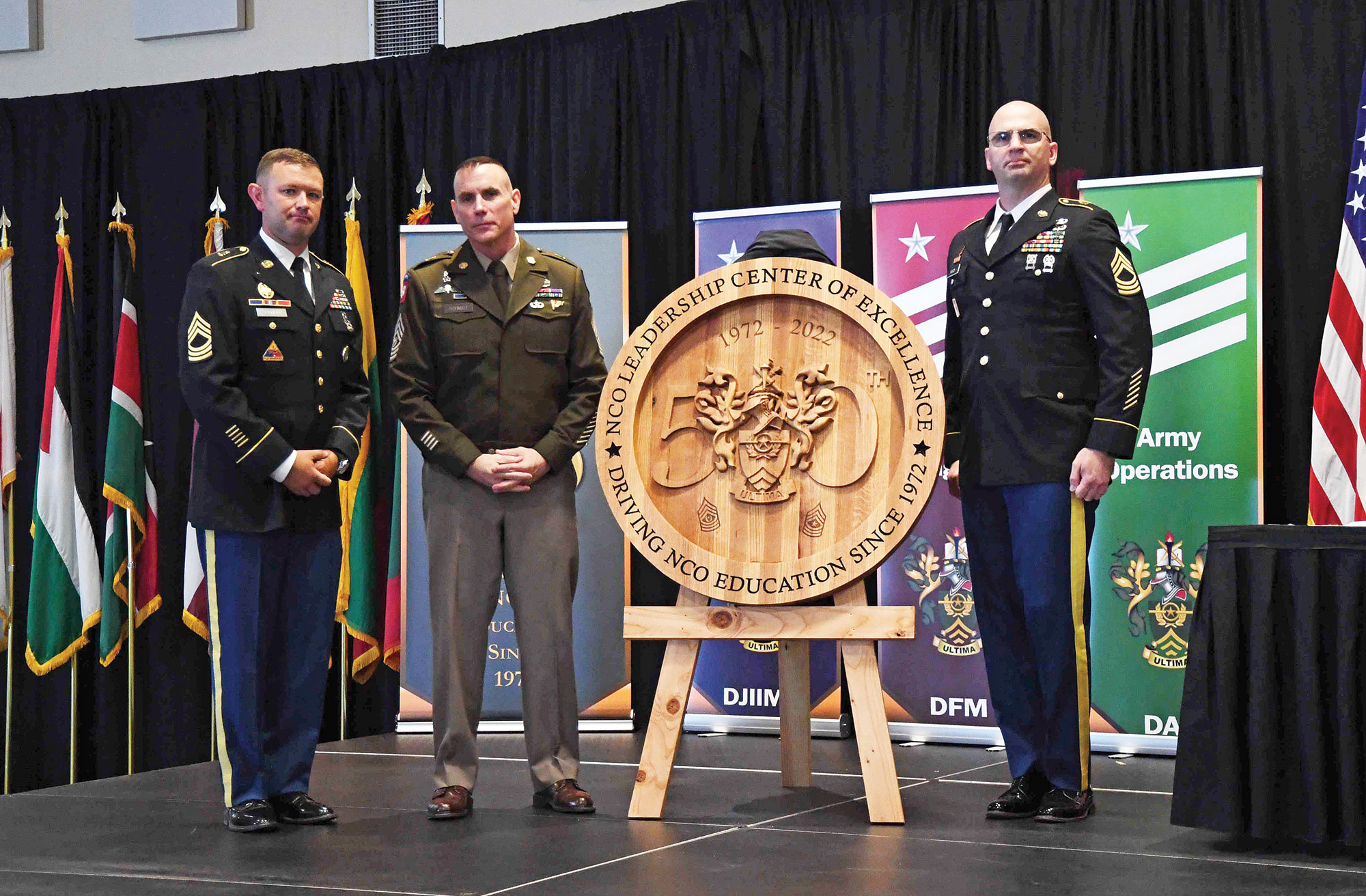 “It is not where you sit that makes you important,” he said. “It’s who you bring along to replace you in that position.”

Class 72 is made up of 521 students consisting of all three components of the Army, three from U.S. Marine Corps, three from the U.S. Air Force, two from the U.S. Coast Guard, and 58 international students from 49 partner nations.

In 2019 the Sergeants Major Academy was accredited under the Command and General Staff College as a branch campus and began offering a Bachelor of Arts in Leadership and Workforce Development. The BA in LWD Degree is a 120-credit hour undergraduate degree program offered in the resident Sergeants Major Course and awarded by the U.S. Army Command and General Staff College. Class 72 earned 146 BA-LWD degrees during the 2021-2022 academic year.

The NCOLCoE Mission is to provide professional military education that develops holistically fit, disciplined, well-educated professionals capable of meeting the challenges of large-scale combat operations in a multi-domain environment. The NCOLCoE Vision is to be the premier institution driving innovative development for enlisted leaders; constantly focused on readiness. For more information visit www.ncolcoe.army.mil.