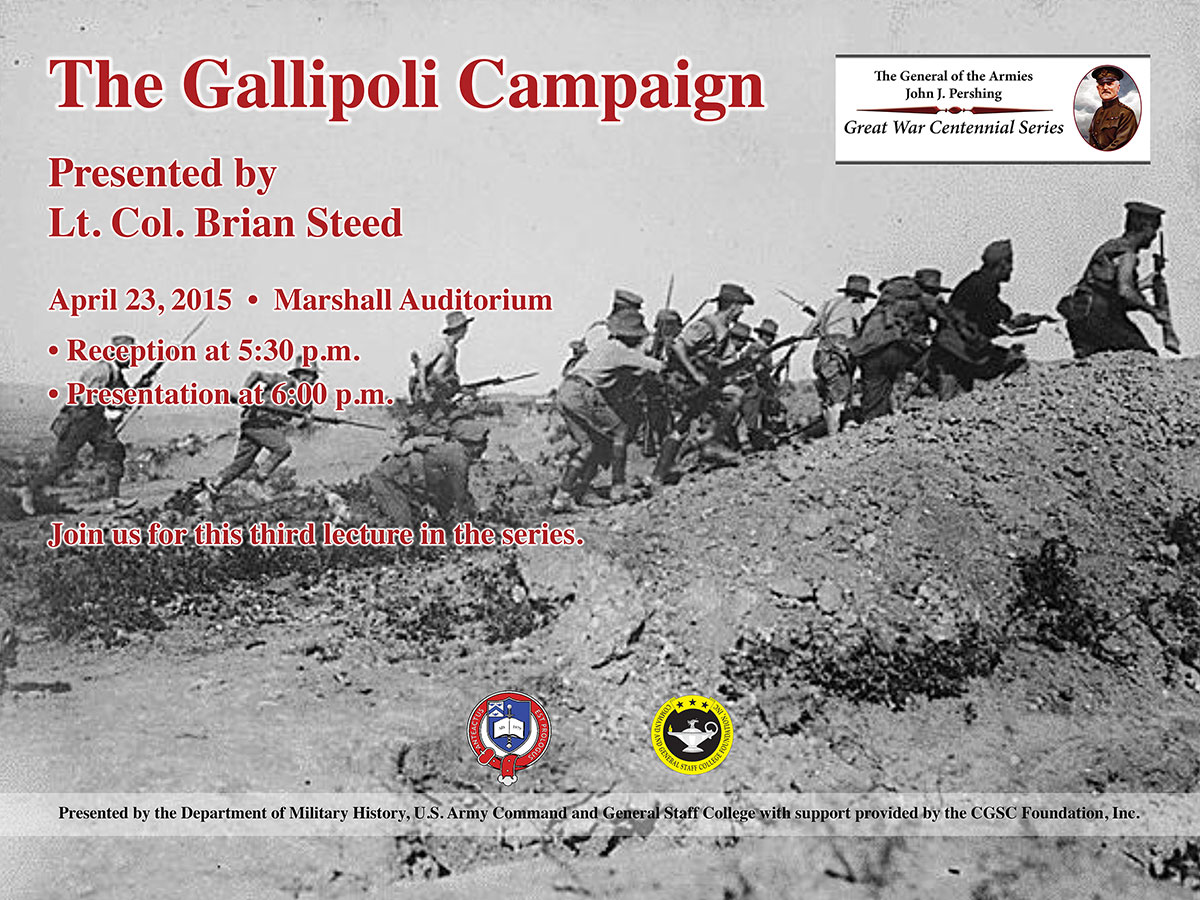 The Department of Military History of the U.S. Army Command and General Staff College at Fort Leavenworth invites the public to attend the third in a series of lectures intended to educate the public about World War I during its 100-year commemoration. –

Lt. Col. Brian Steed, a military history instructor at CGSC, will present “The Gallipoli Campaign” in the Marshall Auditorium of the Lewis and Clark Center on Fort Leavenworth, April 23 at 6 p.m. Guests are also invited to the reception that begins at 5:30 p.m.

In this presentation, Lt. Col. Steed will review the Battle of Gallipoli, which was the amphibious operation of World War One. It became the lesson that every nation studied between the wars as they sought to understand what happened and how to avoid making the same mistakes. Gallipoli was more than this tactical understanding. — It was about the collision of empires in their death throes, the birth of a modern nation and the redesign of a region.

A special treat during this lecture will be perspectives offered by Australian officer Lt. Col. Paul M. O’Donnell and Turkish officer Lt. Col. Mehmet Açikgöz, countrymen from the two main armies that battled on the Gallipoli peninsula 100 years ago. Both are liaison officers assigned to Fort Leavenworth.

The CGSC Department of Military History hosts the General of the Armies John J. Pershing Great War Centennial Series with support from the CGSC Foundation. The lecture series intended to foster understanding of this world-changing conflict during its 100-year commemoration. More than any other single event, World War I was the decisive, shaping experience of the Twentieth Century. It was a brutal war that brought down four empires, led to revolution in Russia, and eventually brought the United States onto the world stage as a major power. We live with its results to this day. All lectures in the series are free and open to the public.

For more information on this or other lectures in the series contact Dr. Richard V. Barbuto at the CGSC Department of Military History: email– richard.v.barbuto.civ@mail.mil or phone– 913-684-2074.

Coverage:  News media interested in covering this event should contact CGSC Foundation Director of Communications Mark H. Wiggins at mark@mhwpr.com/540-287-1763. Plan to arrive at the visitor’s gate at Fort Leavenworth at 5 p.m. to allow time for security checks. 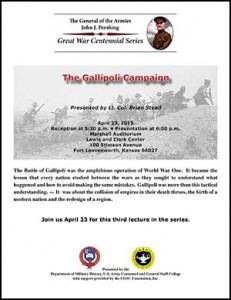