U.S. Student Detachment deputy is Person of the Month – February 2017 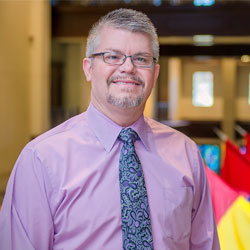 The CGSC Foundation has selected Ty Bruner, Deputy to the Commander of the CGSC U.S. Student Detachment, as the Person of the Month for February 2017.

In his role as the deputy in the U.S. Student Detachment, Bruner is responsible for the health, care, and welfare of more than 1,100 student officers whose representative population includes officers from the active duty Army, Army Reserve, and Army National Guard components, as well as sister service elements (Navy, Air Force, Marine, Coast Guard, and Department of the Army Civilians).

“Ty is the person responsible for keeping the CGSC students informed and in many cases is the problem solver for any issue they may have,” said CGSC Foundation CEO Doug Tystad. “If it has something to do with a CGSC student, Ty is the person to ask.”

“I truly believe that before each class graduates, Ty will know most of the students personally,” said Tystad. “He cares about the students and their families and wants them to succeed.  At times he may serve as a dad, mentor, big brother or friend for these students during the year that they are attending CGSC. One other thing that everyone knows about Ty – he is always impeccably dressed!”

We salute Ty Bruner for his tireless work in support of CGSC students and we greatly appreciate his support to the CGSC Foundation in various interactions with the students and events at the College. Ty is certainly one to recognize and is most deserving of our “Person of the Month” for February 2017.