IMSD director is Person of the Month – September 2016 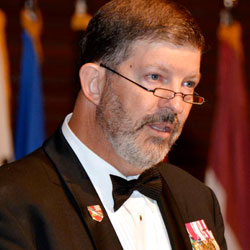 The CGSC Foundation has selected Jim Fain, Director of the CGSC International Military Student Division, as the Person of the Month for September 2016.

Fain has served as the director of the IMSD since 2003 and has proven to be a great asset to the College and a steadfast supporter of the Foundation in his role of supporting the education of the international officers at Fort Leavenworth.

Lt. Col. (Ret.) Jim and Angela Fain on the red carpet at the 2015 Celebration of International Friendship at the Kauffman Center for the Performing Arts in downtown Kansas City.

“Jim is absolutely top notch in what he does for the international officers,” said CGSC Foundation CEO Doug Tystad. “Every year more than 100 IO’s come from around the world and he finds a way to support their personal and family needs, along with their professional requirements, in a way that is none other than superb. Jim is also very helpful in helping the Foundation, to the extent that he can, conduct outreach programs such as our annual Celebration of International Friendship to let the public know about this outstanding program and these very impressive international military officer-students.”

The third annual “Celebration of International Friendship” will be conducted Sept. 16 at 6:30 p.m. at the Kauffman Center for the Performing Arts in downtown Kansas City. Fain’s work in support of this event is to schedule transportation, resolve any family issues with the IO’s to ensure they can attend, work with the sponsors to ensure they’re informed, prepare the introductions and on-screen information, and actually get on-stage himself to do the introductions of the students. – All of which are key to the success of the event.

“Fain’s work on this one event alone is indispensible,” Tystad said, “but he is always engaged and accessible to us in all the programs we execute in support of the College to ensure the story of international officers at Fort Leavenworth is told well.”

Fain is a retired U.S. Army lieutenant colonel whose last assignment on active duty was as the chief of the student division. After his retirement from the Army in 2006, he assumed the role in a civilian capacity. He initially joined the Army as a field artillery officer after completing his bachelor’s degree in political science and the ROTC program at Marshall University in Huntington, W.Va. He later received his master’s degree in international affairs from Columbia University and is a graduate of the 1998 Class of CGSC.

“My work with the International Military Student Program on Fort Leavenworth has allowed me to continue to support our Army in one of our most policy significant areas,” Fain said.  “Daily interaction with our IMS and their families is invigorating and provides all of us in the IMSD with a terrific sense of purpose and satisfaction.”

Fain added that IMSD engagement with the Foundation has been of great benefit to the program.

“From its inception, the CGSC Foundation recognized the importance of the IMS program and has partnered with us in several ventures that have facilitated IMS interaction with important officials and interested members of the public,” said Fain.  “Events like the International Officer Gala at the Kauffman Center and the CGSC outreach event that touched IMS Alumni now working at the United Nations Headquarters in New York City bring incredible positive coverage to the program and are just not possible without the support of the Foundation.”

We salute Jim Fain for his tireless work in support of the international military officer program at CGSC and we greatly appreciate his support to the CGSC Foundation in helping the public understand the significance of this historical program. Jim is more than deserving of our “Person of the Month” for September 2016.