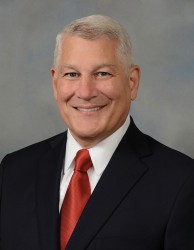 The Colin L. Powell Lecture for the CGSC class of 2020 is scheduled for 9 a.m., Aug. 13,  in the Eisenhower Auditorium of the Lewis and Clark Center. The second commander of U.S. Africa Command and the current president and CEO of the Association of the United States Army (AUSA), retired Gen. Carter F. Ham, will present this year’s lecture.

Gen. (Ret.) Ham commanded U.S. Africa Command from March 2011 to April 2013. Prior to that assignment he served as the commanding general of U.S. Army Europe and 7th Army. He retired in June 2013 after nearly 38 years of service.
(Download the full biography)

With his vast amount of leadership experience at every level of the Army and in joint assignments, Gen. Ham is eminently qualified to address national security and defense issues as this year’s Powell Lecturer.

The Colin L. Powell Lecture Series was established by CGSC and the CGSC Foundation in 2008 in honor of the legacy of Gen. Powell at Fort Leavenworth. Powell, a former Secretary of State and Chairman of the Joint Chiefs of Staff, graduated from the U.S. Army Command and General Staff College, served at Fort Leavenworth as a Brigadier General, and was the driving force behind the development of the Buffalo Soldier Monument that honors the service of the 9th and 10th Cavalry “Buffalo Soldiers.”

The intent of the Powell Lecture Series is to invite national and international distinguished personalities to provide lectures on contemporary issues to the faculty, student body, community and business leaders in the Eisenhower Auditorium of the Lewis and Clark Center, Fort Leavenworth, Kansas.

Lecturers in the series range from heads of state, heads of government, senior diplomats, and other distinguished persons who could bring their unique perspectives to help educate the audience about historical or contemporary issues of importance to the nation or the international community.