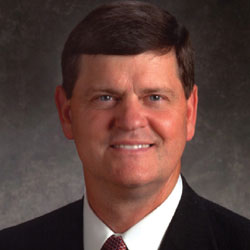 Maj. Gen. Raymond D. Barrett, Jr., current director of the CGSC Foundation’s Simons Center for Interagency Cooperation, has announced his retirement from his position after five years with the Center and 10years total involvement in the CGSC Foundation.

Barrett was a founding officer and trustee of the CGSC Foundation, which was formed in December 2005, serving a four-year term as vice chairman and trustee. He subsequently was selected as the deputy director of the Simons Center, which began organizing in 2009 and opened its doors in April 2010 with a formal ribbon cutting ceremony. He has been the director of the Center since Fall 2013. He will step down from the job officially on Sept. 11, 2015. He held the position of Interim CEO from April to October 2013 after the founding CEO, Bob Ulin retired.

Ray has been the guiding force for the Center since inception and has grown the reputation and reach of the Simons Center throughout the interagency partner community. Ray has negotiated a number of internships with universities such as University of Kansas, Penn State, Park University, interagency partners, and the most recent this past summer with Missouri State University.

Under Ray’s leadership the Simons Center has conducted important cybersecurity initiatives focusing on the interagency aspects of the problem such as conducting the first-ever Cybersecurity Seminar for private and public sector leaders in the Kansas City metro area in 2012 and a follow-on seminar for CEOs in May 2015. In addition, Ray’s oversight of the Simons Center’s publications series have garnered the Center a great reputation as a major influence in helping build the body of knowledge in interagency operations, leadership and cooperation. The InterAgency Essay, InterAgency Paper and InterAgency Study publications are highly sought references for those studying or wanting to publish their work in the interagency arena. The capstone publication, the InterAgency Journal, is now kept both digitally and in hard copy by many libraries with interagency and national security focused collections. Since 2010, Ray has guided several research projects that have led to special editions of the InterAgency Journal or published as a stand alone InterAgency Study. Topics have ranged from weapons of mass destruction; prevention of mass atrocities; southwest border security; the role of political advisors in military operations; economics in counterinsurgency operations and much more. In October 2011 under Ray’s guidance and leadership, the Simons Center also published a book entitled Interagency Handbook for Transitions. The handbook is the result of the “3rd Annual Interagency Symposium –Interagency Transitions in Iraq, Afghanistan, and Beyond” conducted in Spring 2011 at the U.S. Institute of Peace in Washington, D.C., in which senior leaders from across the U.S. interagency community participated in a discussion on how to overcome the “messy” transitions in which they so often struggled. The handbook has been a staple in classrooms for military officers studying the problem.

Along with the publications efforts, Ray has led the development of the Simons Center website to become a valuable online resource for researchers and others looking for interagency news, information and reference materials. In July 2015, he led the launch of a newly redesigned site to further increase its capabilities and contributions to the interagency community.

Major General Barrett began as a distinguished military graduate of the University of Texas Army ROTC program in 1972, was commissioned as an infantry officer and proceeded to take on the various leadership roles of infantry officers, starting as a platoon leader; then company command and so on. Most notably, he commanded 3rd Battalion, 15th Infantry Regiment with the 24th Infantry Division during Desert Shield and Desert Storm; and 2nd Brigade, 2nd Infantry Division in the Republic of Korea. He subsequently served as Chief of Staff of the 24th Infantry Division at Fort Stewart, Georgia; and as Assistant Division Commander, 2nd Infantry Division, again in the Republic of Korea. He then served as the Deputy Director for Operations, Headquarters U.S. Pacific Command at Camp Smith, Hawaii and was Deputy Chief of Staff for Operations and Training at the Army’s Training and Doctrine Command. Major General Barrett was also the 31st Commanding General of the United States Army Training Center and Fort Jackson, S.C.

After retiring from the Army in 2004, Ray worked with HNTB Corporation, an international Engineering, Architecture and Planning firm, as vice president. With HNTB he was involved in strategic planning, leadership development and business development. He ultimately left that position and came to work at the Simons Center in 2009.

In his leadership role with the Simons Center, Ray has been personally recognized as an interagency subject matter expert by the Department of State, the Diplomatic and Consular Officer Retired association, the Peace Keeping and Stability Operations Institute and the Foreign Service Institute. We have been fortunate to have someone of Ray’s stature and capability during the formative years of the Simons Center. While he is an avid fisherman, he isn’t truly “going fishing” as our headline might lead you to believe. He plans to stay committed to the CGSC Foundation and the Simons Center and be a resource as needed while he takes time to pursue other interests.

The CGSC Foundation board of trustees and staff, along with the Simons Center staff and advisory council, wish Maj. Gen. (Ret.) Raymond D. Barrett, Jr., a fond farewell. We hope to see him often at future Foundation and College events.