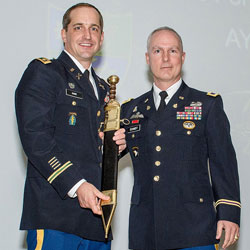 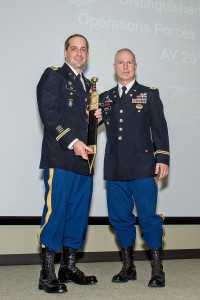 The award is presented to the top resident SOF student in each CGSOC class for achievement and academic excellence. The award honors military scholarship, recognizes excellence in scholarship and overall contributions to the SOF body of knowledge. The award is named after CGSC faculty member and SOF officer Lt. Col. Ronald C. Ward, who had a distinguished 31-year career in the U.S. Army in Infantry and Special Forces units. Ward was killed in a lightweight sport aircraft accident Oct. 8, 2010, during his assignment to the SOF cell of the Combined Arms Center at Fort Leavenworth.

The award in Ward’s honor was created in 2014 and dedicated to his memory by his family as a means to recognize SOF students long into the future. On behalf of his family, Ms. Beth Ward, Lt. Col. Ward’s wife at the time of his death, endowed the award through the CGSC Foundation. The award is a replica of a Roman Gladius sword with the recipient’s name engraved. In addition, a plaque describing the award with a list of all past recipients is in the SOF directorate offices on the third floor of the Lewis and Clark Center.

Harr graduates with his CGSOC class on June 9. He initially began his career as an infantry officer in 2006 upon graduation from the U.S. Military Academy at West Point. His first assignment was with the 1st Battalion, 26th Infantry Regiment of the 3rd Brigade, 1st Infantry Division at Fort Hood, Texas. During this period he deployed to Afghanistan and upon his return he was selected for Special Forces training. He completed the Maneuver Captains Career Course at Fort Benning and subsequently completed the Special Forces Qualification Course (SFQC) at Fort Bragg, N.C. He then joined the 5th Special Forces Group, where he commanded multiple operational detachments in the 4th Battalion and also served as the battalion’s assistant operations officer. During this time Harr served in multiple rotations in Afghanistan and the U.S. Central Command area of operations. After this assignment he was selected to attend CGSOC.

Harr is a graduate of multiple military schools including Infantry Officer Basic, Airborne, and Ranger Schools, Reconnaissance and Surveillance Leaders Course, Scout Leaders (honor graduate), Mechanized Leaders, SERE Level C, SFQC, and Air Assault courses. He also holds foreign language proficiency ratings in Arabic, Persian and Spanish. His awards include the Bronze Star Medal with oak leaf cluster among several others. He also enjoys the distinction of competing in the 2008 Best Ranger Competition where he and his partner finished 16th and were among the first members of the 1st Infantry Division to successfully complete the three-day event.

Harr civilian education includes a bachelor’s in Arabic Studies and he is currently pursuing a master’s in Public Diplomacy – Middle East Affairs through Liberty University. He and his wife Kirsten have one son, Trey, who is three years old.

For more photos from the ceremony, visit the CGSC Flickr photo album.