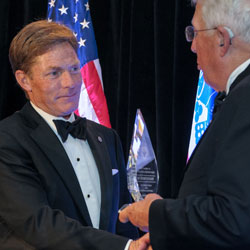 TBT – The Command and General Staff College Foundation presented Mr. Kenneth Fisher, chairman and CEO of the Fisher House Foundation, with the Foundation’s 2014 Distinguished Leadership Award at a dinner banquet in Arlington, Va., Sept. 17, 2014. Foundation Vice Chairman Lt. Gen. (Ret.) John Miller made the official presentation of the award during the ceremony. 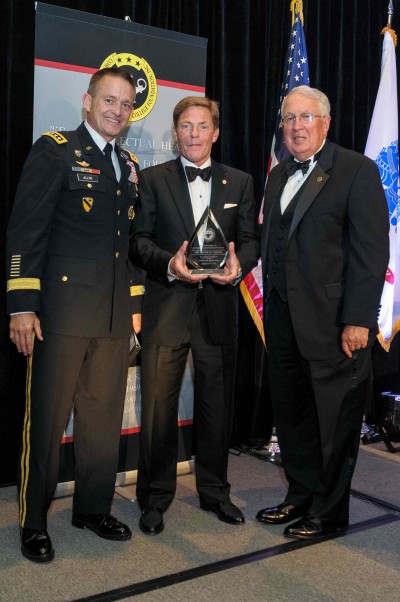 Fisher, who also served a term as a trustee of the CGSC Foundation, is a senior partner at Fisher Brothers, based in New York City, and is part of the third generation of leadership, overseeing the leasing, management and marketing of millions of square feet of commercial, residential and retail space in New York and Washington, D.C.

As a philanthropist, Fisher serves as chairman and CEO of the Fisher House Foundation which was founded in 1990 by his late uncle Zachary Fisher. The foundation is a not-for-profit organization that constructs “comfort homes” for families of hospitalized military personnel and veterans which saves these military families thousands of dollars in lodging and travel costs to be present for their loved ones during hospital stays. As of 2019 there were 84 Fisher Houses that have served more than 335,000 families and provided more than 8 million days of lodging, saving them more than $407 million in lodging and transportation costs.

Special guest speaker for the Distinguished Leadership Award banquet was the U.S. Army Vice Chief of Staff Gen. Daniel B. Allyn who gave Fisher great praise for his support for service members and their families, noting his Foundation’s support of benefits for fallen service members’ families during the 2013 government shutdown.

“I will accept this award, but only on behalf of my staff and their work,” Fisher said during his acceptance remarks.

We salute Mr. Kenneth Fisher once again as he remains the leader of the Fisher House Foundation, still exhibiting what the Foundation recognized in 2014 – distinguished leadership.

Read the original award story and watch the tribute video.

Read the feature article with more photos in the Foundation News magazine (No. 17/Fall 2014)

For more photos see the album on the CGSC Foundation Facebook page.