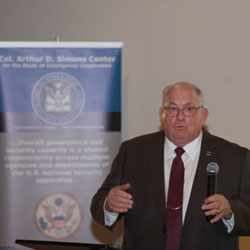 The tenth lecture in the Vietnam War Commemoration Lecture Series was conducted Jan. 31 at 6 p.m. in the Stove Factory Ballroom in downtown Leavenworth, Kansas (417 S. 2nd Street) in front of a record attending audience of more than 100 members, including several Vietnam veterans. A reception sponsored by the CGSC Foundation began at 5:30 p.m. 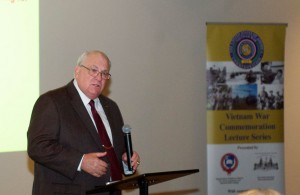 In this tenth lecture of the series, Dr. James H. Willbanks, General of the Army George C. Marshall Chair of Military History at the U.S. Army Command and General Staff College, discussed the Tet Offensive of 1968. Fifty years ago on Jan. 30, Viet Cong and North Vietnamese forces launched a massive countrywide attack on South Vietnam. Though the Communists failed to achieve their tactical and operational objectives, Hanoi won a strategic victory causing many Americans and key presidential advisors to question the wisdom of prolonging combat. In many ways, the Tet Offensive proved to be the watershed event of the war, causing a major shift in U.S. policy and ultimately the withdrawal of U.S. military forces.

As an added feature of this lecture, Vietnam militaria collector Joe Grasela was on hand to present his collection of more than 360 unit crests of the U.S. Army units that served in Vietnam. Grasela, a retired Army officer and former CGSC instructor, said his collection is based on work done by Shelby Stanton and published in his book Vietnam Order of Battle. 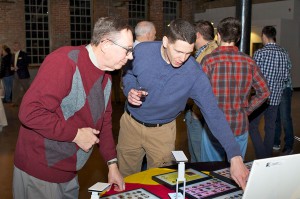 Vietnam militaria collector Joe Grasela, left, discusses some of his unit crest collection with an attendee at the Vietnam lecture Jan. 31.

This was Dr. Willbanks’ last lecture of the series as he is planning on retiring at the end of this academic year. He will continue administration of the lecture series until that time. The next lecture is March 1 at the same location and will feature a presentation on the My Lai Massacre by Dr. Bill Allison from Georgia Southern University. CGSC Foundation trustee Col. (Ret.) Bill Eckhardt will also be in attendance at the lecture. A major in the Army’s Judge Advocate General’s Corps at the time, Eckhardt was the U.S. Army’s chief prosecuting attorney in the My Lai trials.

Dr. Willbanks is the General of the Army George C. Marshall Chair of Military History and former Director of the Department of Military History at the U.S. Army Command and General Staff College, Fort Leavenworth, Kansas. He has been on the faculty since 1992, when he retired from the Army as a lieutenant colonel with 23 years service as an infantry officer in various assignments, to include a tour as an advisor with a South Vietnamese infantry regiment during the 1972 North Vietnamese Easter Offensive. Willbanks is an honor graduate of the U.S. Army Command and General Staff College and a graduate of the inaugural class of the School of Advanced Military Studies. He holds a B.A. in History from Texas A&M University, and an M.A. and Ph.D. in History from the University of Kansas. He is the author or editor of 14 books on the Vietnam War and other topics in military history. Dr. Willbanks also served as a consultant to Ken Burns in the preparation of a 10-part documentary on the Vietnam War to which began airing on PBS television in 2017. His military awards and decorations include the Silver Star, Legion of Merit, Bronze Star with “V” and Oak Leaf Cluster, two Purple Hearts, and Republic of Vietnam Cross of Gallantry with two Silver Stars.

For more information on the content of lectures in the series contact Dr. Tom Hanson, CGSC’s director of the Department of Military History: email– thomas.e.hanson.civ@mail.mil or phone– 913-684-2056. For other questions, contact Rod Cox, email– rcox@thesimonscenter.org, or Ann Soby, email– ann@cgscf.org, at the CGSC Foundation or phone 913-651-0624.

All lectures in the series are free and open to the public. This lecture series is presented by CGSC’s Department of Military History, U.S. Army Garrison Fort Leavenworth and supported by the CGSC Foundation and the Henry Leavenworth Chapter of AUSA.

The CGSC Foundation has received additional support for the Vietnam lectures in academic year 2018 from the national headquarters of the Veterans of Foreign Wars (VFW) in Kansas City, Missouri, First Command Financial Services in Leavenworth, Kansas, and Vietnam Veterans of America (VVA).