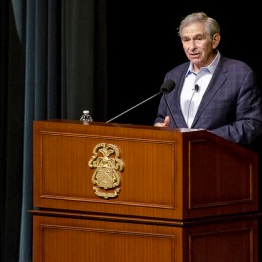 Paul D. Wolfowitz spoke to the CGSC class on May 14, 2015,
in Eisenhower Auditorium of the Lewis and Clark Center
at Fort Leavenworth. Wolfowitz is a former President of  the World Bank, United States Ambassador to Indonesia, U.S. Deputy Secretary of Defense, and former dean of the Paul H. Nitze School of Advanced International Studies at Johns Hopkins University.

Before Wolfowitz spoke to the class, the CGSC Foundation hosted a luncheon for him and a small group of CGSC students and faculty. During the luncheon, this small group had the opportunity to ask questions and discuss his experiences in working at the highest levels of government in the Department of Defense and State Department. (Photo courtesy CGSC Public Affairs.)