Bell Yearbook editor selected as February Person of the Month 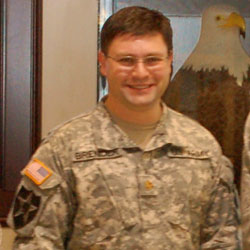 The CGSC Foundation has selected Maj. Lance Brender, editor-in-chief of the Bell yearbook for CGSC’s Class of 2016, as the Person of the Month for February 2016. 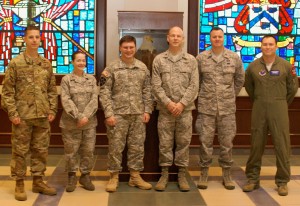 Brender’s willingness to volunteer for leadership of the most enduring record of his class’s time at Fort Leavenworth and the Command and General Staff College is admirable. Throughout the years, most CGSC students see this role as too time consuming and prefer spending their time on other projects.

“I got involved with the Bell Yearbook because I can’t stop myself from saying yes to something when it’s offered to me,” Brender said. “It’s an amazing moonlight job that I truly enjoy. It isn’t work, it’s art.”

Brender’s experience with the yearbook has also allowed him to develop some perspective and offer some advice for future yearbook editors.

“Don’t be afraid to rewrite everything that came before, and make it an expression of what it is to be here at this school for a year,” he said. “Don’t worry about how much effort it’ll take, you’ll love every minute of it.”

Brender is an Armor officer from Cashmere, Washington, who graduated from the ROTC program at Pacific Lutheran University in 2004 with a bachelor’s degree in business administration. He came to Fort Leavenworth after completing an assignment as an armor advisor to the Saudi military. He is currently pursuing a Master of Military Art and Science (MMAS) degree at CGSC. He is also currently competing to enter the Army’s Cooperative Degree Program with the hope of obtaining a masters degree in linguistics at the University of Kansas. One might say with little doubt that he’s very busy these days, but is relishing his time at CGSC.

“My biggest takeaway from CGSC will be the personal growth I’ve experienced,” said Brender.  “I’ve learned more about myself, what makes me tick and why I am really in the military, during this year than in the previous 11 years combined.  I’ll take a better understanding of who I am and a deeper resolution to what I stand for forward from here.”

The CGSC Foundation salutes Maj. Lance Brender and his Bell yearbook staff for their service to their class and their contribution to the history of CGSC.