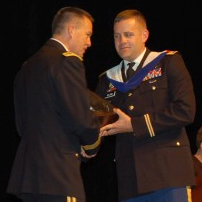 Center. The graduating class of 1100 included mid-career officers from the U.S. Army, as well as a small contingent of U.S. Navy, Marine Corps and Air Force officers. The graduating class also included 69 international officers and 16 federal government civilian employees from other agencies of the U.S. government. Gen. Daniel B. Allyn, 35th Vice-Chief-of-Staff of the Army, was the guest speaker for the ceremony.

As with each class distinguished graduates were recognized at the beginning of the ceremony. Twenty awards for the class were presented, of which 11 were sponsored by the CGSC Foundation.

Awards sponsored by the Foundation and the 2015 class recipients:

Other class awards not sponsored by the CGSC Foundation:

During the ceremony CGSC also recognized Dr. Phillip G. Pattee, from the Department of Joint, lnteragency and Multinational Operations as the U.S. Army Training and Doctrine Command (TRADOC) Educator of the Year.

Visit the CGSC Foundation photo gallery for photos of all the award winners and the overall ceremony.