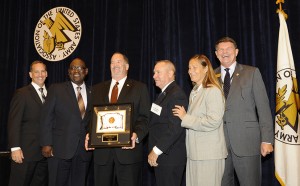 Dr. Jim Martin, Associate Dean of Academics at the Command and General Staff College was honored during the annual meeting of the Association of the United States Army (AUSA) on Oct. 14, 2015. Dr. Martin was recognized as the AUSA Region Five Department of the Army Civilian of the Year and a finalist for the national AUSA Department of the Army Civilian of the Year. The award was presented by Gerry O’Keefe, Administrative Assistant to the Secretary of the Army; Diane Devens, Senior Fellow for AUSA; and Lt. Gen. (Ret.) Guy Swan, Vice President of AUSA. The award nomination cited Dr. Martin’s contributions to professional military education, both in the U.S. Army and working with partner countries through programs like the Africa Military Education Program. Dr. Martin’s community work, speaking with local groups and supporting adult education efforts at various churches was also cited as an important component of his nomination.