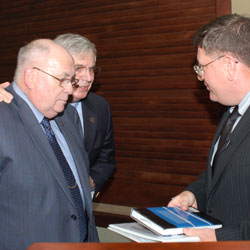 The Department of Military History, in conjunction with the CGSC Foundation, Inc., was pleased to sponsor the fourth lecture in the General of the Armies John J. Pershing Great War Commemoration Series on Sept. 10. Dr. John Kuehn gave a macro level view of the War at Sea and then his insights into what lessons we can take from those events. The Department of Military History began this lecture series last fall in order to not only commemorate the major events on this 100 year anniversary of the war, but also to point to the great events of that war that have driven much of the 20th century and continue to resonate today. The lectures aren’t necessarily about battles, but rather are focused on what we can and should take from that war even today.

I believe that programs like the Pershing Lecture Series add depth and substance to the Command and General Staff College and the whole “Leavenworth experience.” When I was the Dean of Academics for the College from 1998 to 2000, I encouraged these types of extra-curricular programs to enrich our educational experience. I believed then as now that a college or university, especially one like CGSC, should be more than just preparing for and attending class. These kinds of events provide the intellectual rigor of faculty members voluntarily preparing the lecture in order to add to their personal knowledge and capability. They also are eager to impart that knowledge to willing participants and to learn from the discussions that follow. This is an opportunity to learn and discuss issues more in depth than during the normal class periods. Lectures and seminars like these are important to the life of CGSC; I strongly encourage all of you to participate in those subjects that are of interest to you.

The Foundation will continue to support the Pershing Lecture Series, anticipating up to four per year. The next Pershing Lecture on Nov. 3 is entitled “The War in the East” will include a guest lecturer from Kansas State University who is a subject matter expert and noted author on the subject. We are pleased to have the Lockheed Martin Corporation as a sponsor for the November lecture and the law offices of Spencer Fane in Kansas City as sponsors for the sixth lecture in the series. I’m really looking forward to that lecture since we’re still feeling the effects of the tumultuous events in from that part of Europe today.

In addition, the Foundation is looking for sponsors to help us support a series of Vietnam Commemoration lectures, also in partnership with the Department of Military History. As you should know, this year is the 50th anniversary of the first major unit engagements of that war. The Class of 2015 memorialized the anniversary with their class gift of a painting depicting the Battle of the Ia Drang Valley in November 1965. That battle was depicted in the excellent book “We Were Soldiers Once, and Young” written by Lt. Gen. Hal Moore (U.S. Army, Ret.), the battalion commander in the battle, and Mr. Joe Galloway, an embedded reporter with the battalion. This year was also the 40th Anniversary of the fall of Saigon so I think it appropriate that the College and the post commemorate these events and this war by helping this generation understand it better in order to avoid the mistakes we made back then.

Our first Vietnam Commemoration Lecture will be in November and we plan to hold four per year – one per quarter. If WWI is not your area of interest, maybe the Vietnam War is, so I encourage you to take advantage of the opportunity. I believe that students and faculty as well as the general public should take every opportunity to continue their life-long learning adventure. These lectures offer a unique means of enhancing the whole Leavenworth experience. The Foundation is pleased to support these lectures and other programs that enhance the academic experience.