In summer 2015, the CGSC Press published a selection of the papers submitted for the 2015 Fort Leavenworth Ethics Symposium. – Click the cover below to download the report. 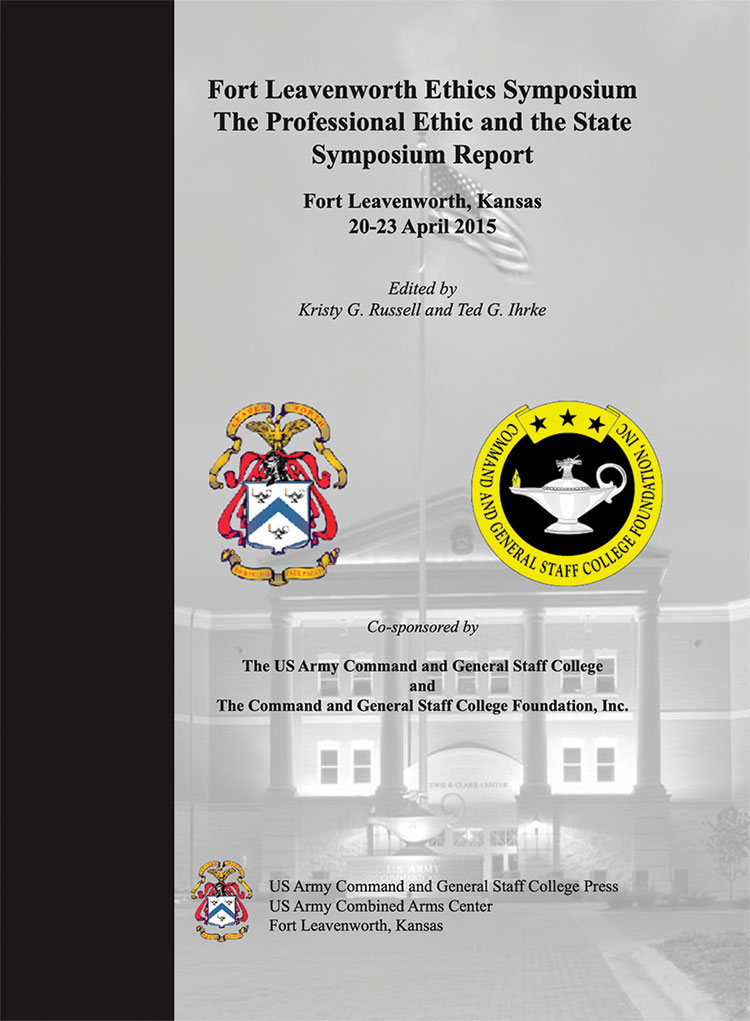 The Professional Ethic and the State

The 2015 ethics symposium explored the responsibilities and obligations between the United States and its military. We are on the brink of a new era following more than a decade of war. Many factors indicate this era will be characterized by difficult choices for the services and our civilian leadership. At the heart of these challenges lie the Army’s emerging doctrine and ethic of the military profession and the contract between the soldier to the state. What does the soldier owe the state; and, what are the state’s responsibilities to the soldier in return for his or her service and sacrifice to the nation?

The Program: CGSC issued a call for unpublished papers for the symposium in fall 2014 and selection of papers to be presented at the symposium was conducted in December 2014. (Download the detailed Call for Papers.) Authors of the selected papers facilitated lively discussions about their work in breakout sessions during the symposium.

Downloads and other resources

Opening Remarks –
The Profession of Arms and the Moral State We are In: The Shared Mission of Ordered Liberty
Daniel M. Bell, Jr., Ph.D.

Veteran’s Administration: Can it Provide What the Nation Needs it to Provide?
O. Shawn Cupp, Ph.D. and Don. A. Myer

Jus ad Bellum, Conscience, and the Oath of Office: The Problem of Selective Conscientious Objection in the United States Military
Prisco Hernández, Ph.D.

The Erosion of Trust between America and Its Army
Ted Ihrke and Ted Thomas, Ph.D.

Kevlar for the Soul: The Morality of Force Protection
Marc Livecche, Ph.D. Candidate

Competing for Relevance – The Army Ethic in an Age of Moral Diversity
Colonel Brian M. Michelson