Fairfield Inn leaders are ‘Persons of the Month’ – January 2018 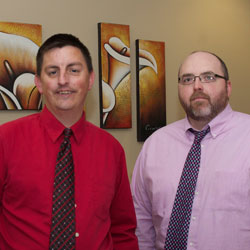 The CGSC Foundation has selected Michael Watson and Brian Huntington from the Fairfield Inn and Suites in Leavenworth, Kansas, as the “Persons of the Month” for January 2018. 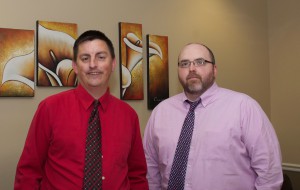 General Manager Michael Watson, right, and Assistant General Manager Brian Huntington, left, of the Fairfield Inn and Suites in Leavenworth, Kansas, are the CGSC Foundation “Persons of the Month” for January 2018.

Watson is the general manager and Huntington is the assistant general manager of the Fairfield Inn and Suites hotel located just outside the main gate of Fort Leavenworth. According to Foundation Director of Operations Ann Soby, their commitment and support to the Foundation is invaluable and ever since the Fairfield Inn and Suites was opened in Leavenworth, there has been a growing relationship between the Foundation and the hotel.

“The General Manager, Michael Watson, and Assistant General Manager, Brian Huntington, both understand the meaning of ‘customer service’,” Soby said. “Their knowledge and experience of hotel management is obvious the minute you walk through the door of the hotel. They work alongside and with their staff to provide a pleasant work environment and professional and courteous service to every guest.”

General Manager Michael Watson is originally from Appomattox, Virginia, and moved to the Leavenworth area in 2016 with his wife and two children. He has been in the hospitality industry since graduating from Virginia Tech in 2001, with stops in Georgia, Florida, North Carolina, Virginia, before coming to the hotel in Leavenworth. He is the recipient of several accolades along the way, including being named a Marriott Diamond General Manager of the Year and Virginia Department for Aging and Rehabilitative Services Employer of the Year. He is an active member of the Leavenworth business community, serving in the Rotary Club of Leavenworth, as a member of the advisory board of the Leavenworth Convention and Visitors Bureau, and a member of the board of directors for the Hotel and Lodging Association of Greater Kansas City.

Assistant General Manager Brian Huntington was born and raised in Kansas City, ultimately graduating from the University of Central Missouri with a degree in Hotel and Restaurant Management. He has worked at every level in the hotel business from front desk agent to his current position. His goal is to become a general manager and one day own his own hotel.

“Michael and Brian always manage to meet our requests for reservations and transportation – quickly and efficiently,” Soby said. “I know when I call them our guests will be taken care of and that is most important to our Foundation.”

We salute Michael Watson and Brian Huntington for their outstanding support of the CGSC Foundation mission in support of the College. – They are truly deserving of our recognition as “Persons of the Month” for January 2018.