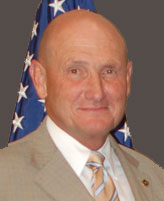 After nearly seven years of service of extraordinary service on the board of trustees of the CGSC Foundation, noted entrepreneur and founder of the Franklin-Quest company Hyrum Smith has stepped down from his duties as president of the Foundation.

“My experience working with General Arter, Bob Ulin and all the other amazing people on the CGSC Foundation has been a singular blessing in my life,” said Smith. “A need for more time at home has prompted me to step back from several board responsibilities. I will severely miss the camaraderie and, frankly, fun of working with our nation’s heroes.”

Foundation Chairman Lt. Gen. (Ret.) Robert Arter said Smith has been an inspirational leader and a valued member of the leadership team.

“We have all been blessed to have received Hyrum’s support for our cause,” said Arter.  “As both a trustee and especially as our president, he has challenged us, made us laugh and been ever remindful of the importance of strong leadership for our nation.”

According to Foundation CEO Bob Ulin, Smith’s leadership helped to jumpstart fundraising for the Foundation that generated widespread support from around the country.

“Hyrum’s strong leadership and his expert story telling ability made an extremely positive impression on military officers and their spouses over the past six years at the Command and General Staff College,” said Ulin. “We will miss his good humor, guidance and his friendship. He has made an indelible contribution to the Foundation and to the development of our nation’s leaders at CGSC.”