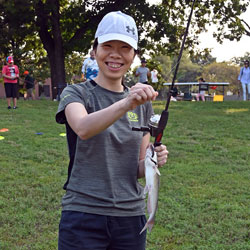 The Fort Leavenworth Rod & Gun Club hosted the post’s first-ever International Family Fishing Derby at Merritt Lake on Fort Leavenworth on Sept. 11. The event was open to everyone, but targeted specifically at the international students and their families who are part of the Command and General Staff Officer’s Course (CGSOC) Class of 2022. 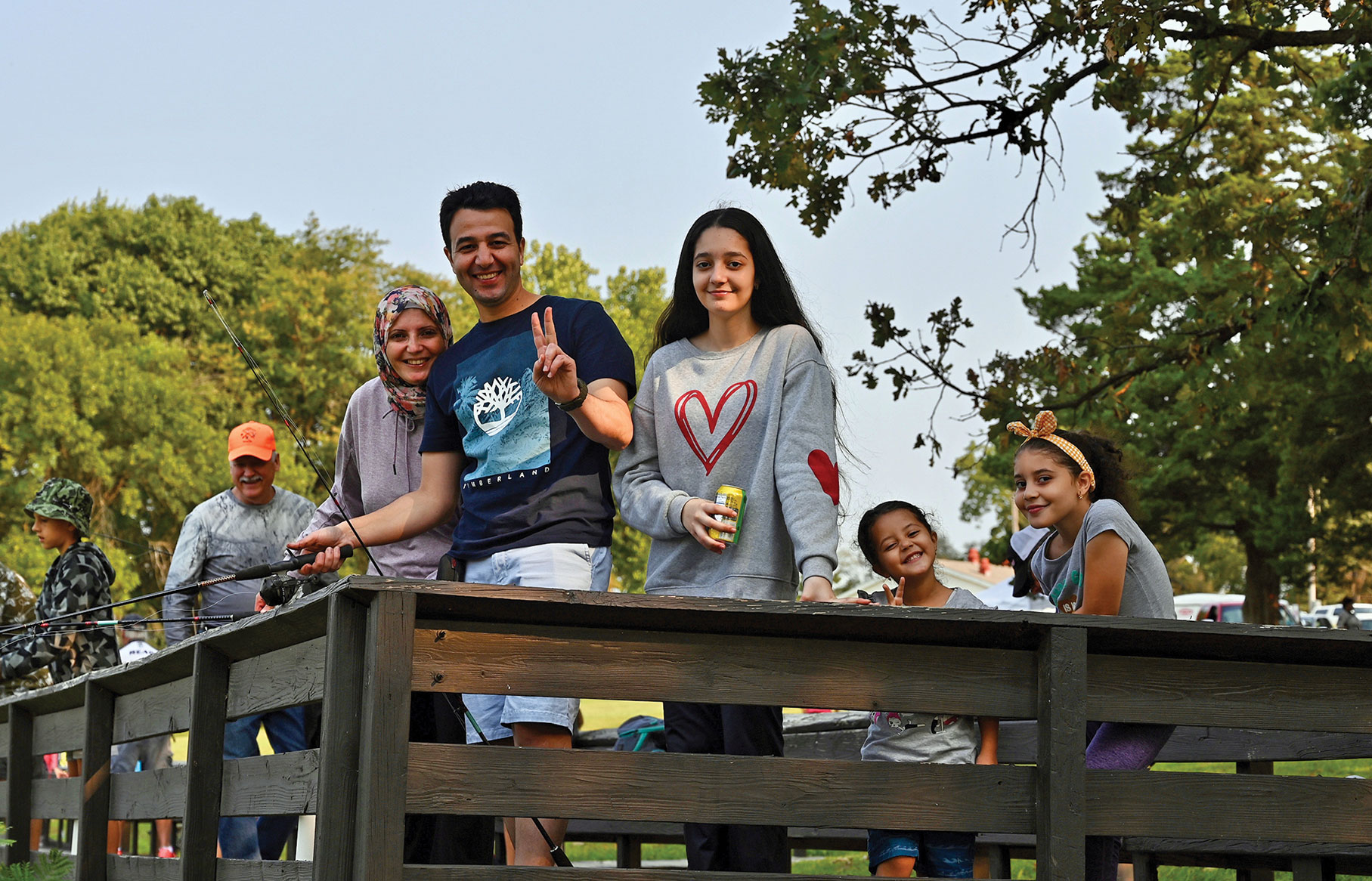 Lt. Col. Ahmed Etman along with his wife and three daughters fish from the dock at Merritt Lake, Fort Leavenworth, during the International Family Fishing Derby on Sept. 11. Etman is an international military student from Egypt enrolled in the Command and General Staff Officers Course Class of 2022.

The derby was supported by volunteers from Fishing’s Future, a nonprofit organization dedicated to teaching the skills and benefits of recreational angling, and the Leavenworth Bass Club. The CGSC Foundation sponsored the derby with the fishing bait and the concessions.

“This derby is the result of a conversation between Jim Fain, director of the CGSC International Student Division, and me,” said Larry Noell, president of the Fort Leavenworth Rod & Gun Club. “We felt it was a great opportunity to teach the participants a bit about the sport and bring them together with us in a family atmosphere.”

Noell said the Rod & Gun Club has hosted fishing derbies before, but none were focused on bringing out the international families that are at Fort Leavenworth each year for the Command and General Staff Officers Course.

“This event allows us to show our international families a piece of Americana,” added Rod Cox, CGSC Foundation president/CEO, “and it fits well-within the Foundation’s mission of supporting Soldiers and families.”

According to Noell, there were 123 registered participants representing 34 countries. 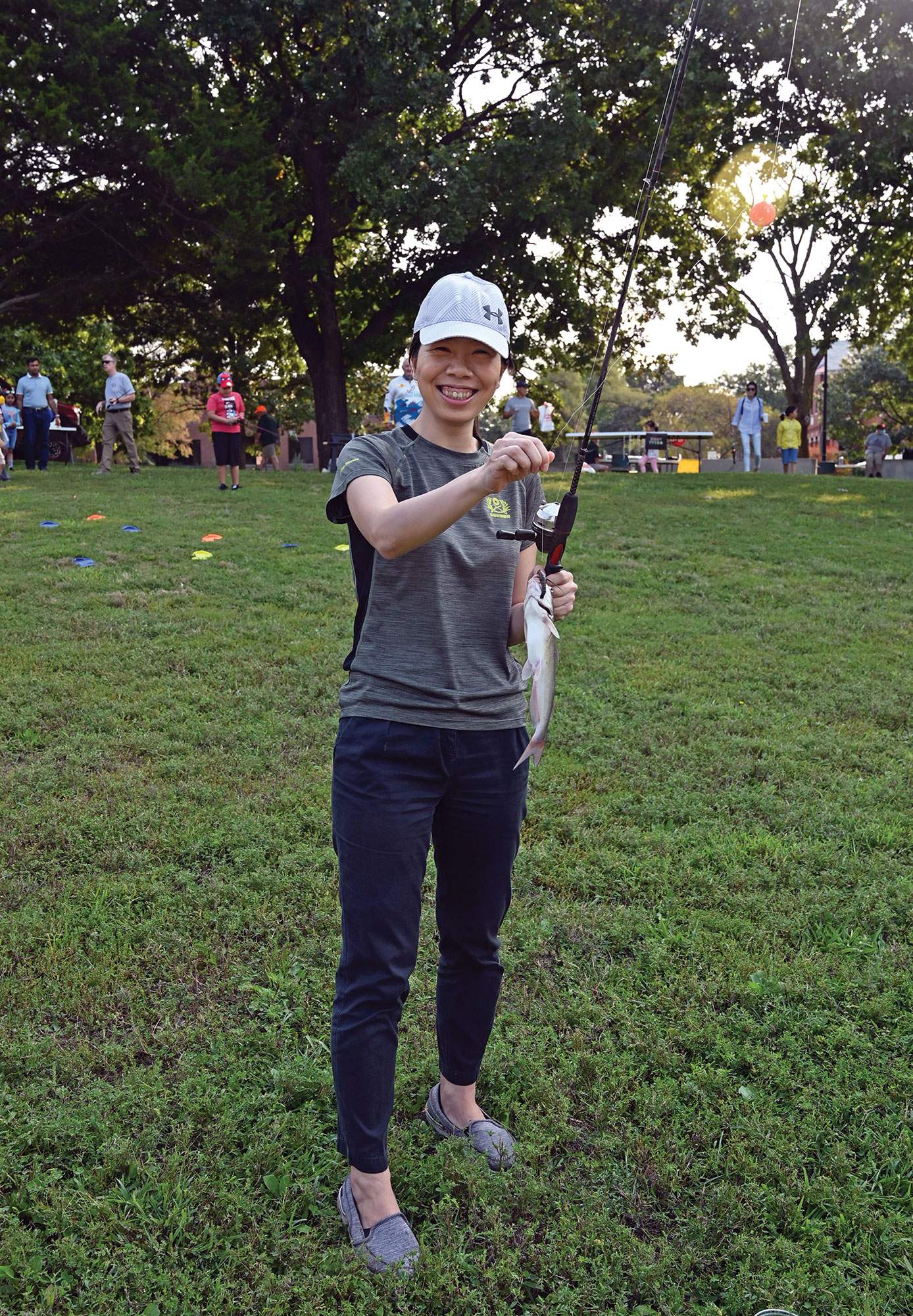 Maj. Yu-yung Chiu, a Taiwanese army officer enrolled in the Command and General Staff Officers Course Class of 2022, shows off the catfish she reeled in during the International Family Fishing Derby Sept. 11 at Merritt Lake.

“This is the first fish I’ve ever caught,” beamed Maj. Yu-yung Chiu, a Taiwanese army officer enrolled in the Command and General Staff Officers Course Class of 2022, as she held up the catfish she had just reeled in. “And this is very fun.”

That spirit of fun was visible all around the lake with families and their children lining the docks and the banks trying out their newfound casting skills, getting over the squeamishness of baiting their hooks with worms, catching the elusive “stick bass” and ultimately reeling in their catch.

Before the families began fishing, volunteer instructors from Fishing’s Future provided classes on various aspects of fishing including how to identify fish species, how to handle them once caught, and how to cast with a closed-face reel. Once the fishing began volunteers from the Leavenworth Bass Club and the Fort Leavenworth Rod & Gun Club also pitched in to help solve problems, reinforce casting techniques, bait hooks and cheer the participants on.

At the end of the fishing period Noell gathered up all the participants and presented first and second place awards in four divisions: male youth, female youth and male and female adult. Winners were determined first by number of fish caught and then length of the fish, so the rule of the day was to haul in as many as possible, no matter the size. 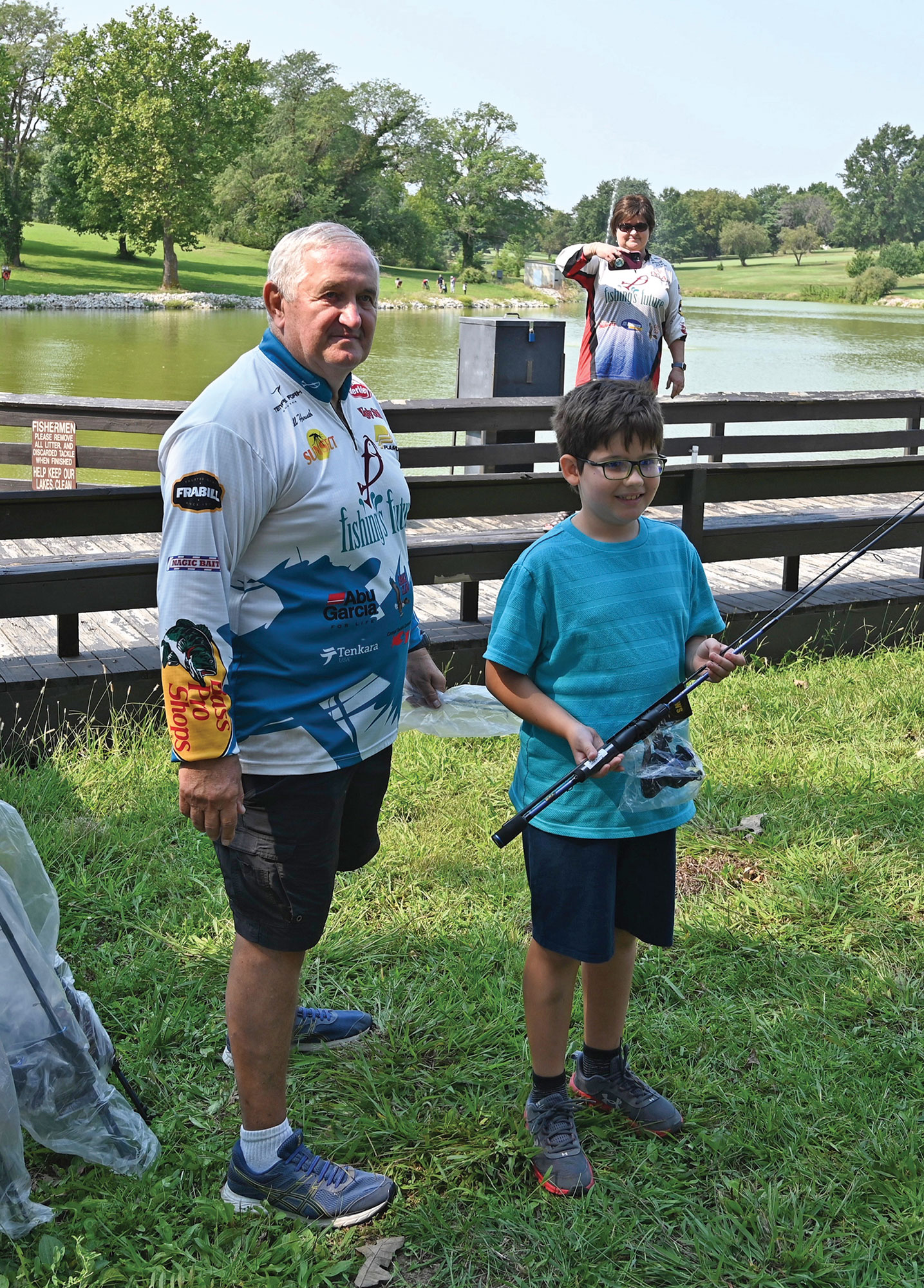 Bill Horvath, an instructor with Fishing’s Future, presents 10-year-old Aleksander Ninov with a new rod and reel combo as the first place winner in the Male Youth division (under 16 years old) at the International Family Fishing Derby Sept. 11 at Merritt Lake. Aleksandar’s father, Maj. Vladimir Ninov, is an international military student from Bulgaria enrolled in the Command and General Staff Officers Course Class of 2022.

At the conclusion Noell thanked all the participants, volunteers and sponsors. In a quiet moment after the ceremony while participants were leaving and all the equipment was being packed, he hinted that this derby was special and possibly worth repeating every year as long as the support was there. Given the smiles and laughter throughout the event and the enthusiastic cheers and applause during the awards ceremony by all the international families, one could say he may be onto something.

View more photos, including photos of the winners, on the CGSC Foundation Flickr site