The CGSC Foundation has selected Robert J. Myers, Chairman, Casey’s General Stores, as the Person of the Month for July 2016.

Myers is currently serving his third term as a member of the CGSC Foundation board of trustees. He joined the board in 2009. He recently retired from his position of president/CEO of Casey’s General Stores and is now chairman of the company. 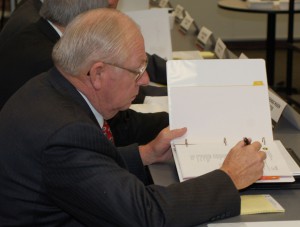 “Bob has been an outstanding asset to the Foundation board of trustees,” said CGSC Foundation CEO Doug Tystad. “With his leadership and influence we’ve been able to reach out to develop new corporate support for our mission. Because of his work on our board and his recent retirement, we wanted to recognize him in some small way with our ‘person of the month’ feature.”

In an update to Foundation board members, Tystad recounted some of Myers’ accomplishments that were outlined during his retirement ceremony on April 30, in Ankeny, Iowa.

“He fought off a hostile takeover; grew the company by 800 stores; established a distribution system that saved millions annually and promotes growth; started pizza at home delivery; and quadrupled shareholder value, to name a few,” Tystad said.

Myers is a retired U.S. Army lieutenant colonel whose last assignment on active duty was as a CGSC instructor from 1985-1988. After his retirement from the Army, Myers immediately joined Casey’s General Stores in January 1989. He became the president and CEO of Casey’s in June 2007. According to an article in the company’s newsletter, when he first joined Casey’s 27 years ago, Myers was just looking to supplement his retired military pay.

“I never expected to be CEO,” said Myers. “I wanted to be low key, but as time went on, I took on more and more.” 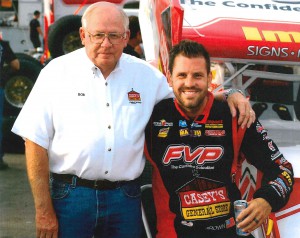 During his tenure as president/CEO of Casey’s General Stores, Bob Myers spent some time at the track with Brian Brown, the top Sprint car driver that Casey’s sponsors.

During one of his retirement gatherings Myers said, “I realize with my retirement, I am entering the last phase of life, but I am thankful that I have been deeply blessed. I hope to do more fishing, play more golf, spend more time focusing on philanthropic involvement, and enjoy more time with Janice, my wife of 49 years.”

We salute Bob Myers for his accomplishments in the business arena, wish him well as he begins to enjoy more time with his family and hobbies, and we certainly look forward to his continued work with the CGSC Foundation for some time to come!

Myers, top row/second from right, takes a group photo with other CGSC Foundation board members during a board meeting in 2015.