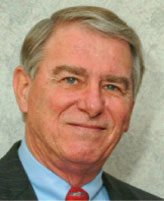 “It has been an honor and a privilege to establish, develop and grow the foundation,” said Ulin. “All the major objectives we have set for ourselves have been achieved—the gift from Ross Perot that established the Ethics Chair and the Simons Center, the grant from the U.S. Department of Education, the Five-Star Generals Commemorative coin program and the respect of our donors and the leadership of the Command and General Staff College. What an incredible and fulfilling journey this has been.”

Foundation Chairman Lt. Gen. (Ret.) Robert Arter said, “An old Tennessee expression comes to mind to cut to the chase to acknowledge, commend, and share with all our assessment of Bob Ulin’s extraordinary accomplishments: ‘If you can brag without lying, then brag.’ We do so unabashedly.”

According to Foundation General Counsel and co-founder, Willard Snyder, Ulin’s vision, creative fund raising style and organizational ability were the keys to his success.

“He took on challenges that none of the other foundations would touch, like spending two and a half years walking the halls of Congress gathering nearly 400 cosponsors for the Congressional coin bill.” Snyder said. “This was an extraordinary achievement.”

Ulin’s official retirement date was May 15. Aside from spending more time with his wife Terri and their extended family, he said he plans to do some writing and possibly some consulting work. Retired Maj. Gen. Raymond D. Barrett, Jr., Deputy Director of the Simons Center, is the interim-CEO of the Foundation, while the Board of Trustees conducts a search for candidates.