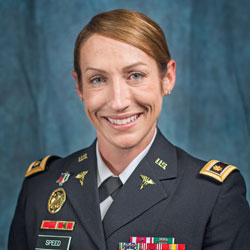 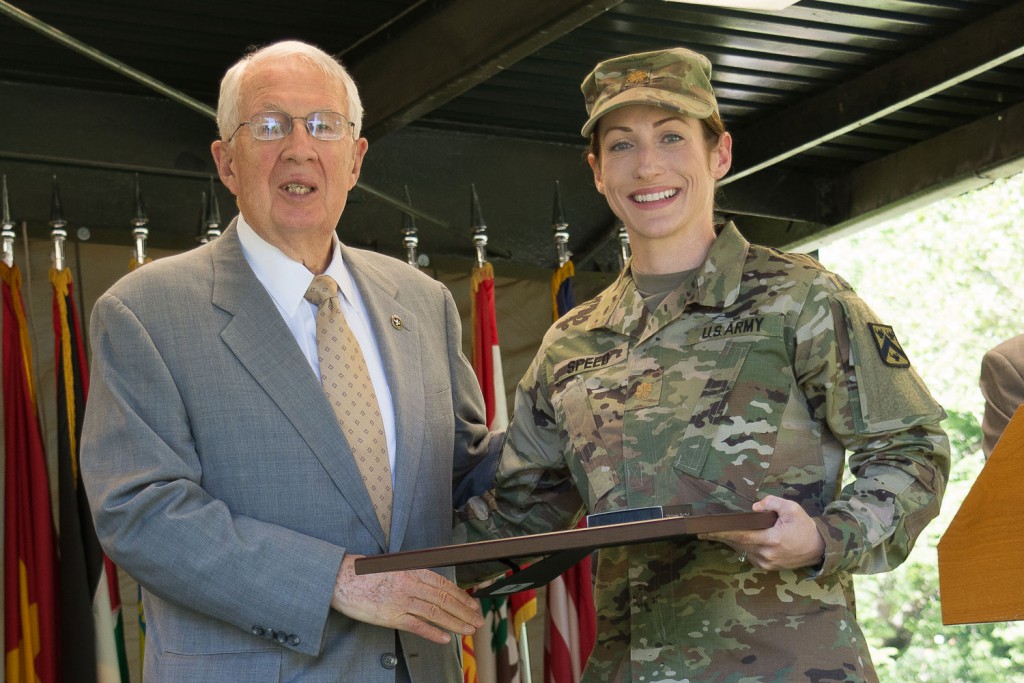 U.S. Army nurse Major Genna Speed received recognition for her leadership abilities and was selected as the winner of the Lieutenant Colonel Boyd McCanna “Mac” Harris Leadership Award for the CGSOC Class of 2017. According to the announcement from CGSC Deputy Commandant Maj. Gen. John S. Kem, Speed was chosen was chosen for excelling academically and demonstrating superior leadership in class through outstanding performance in positions of responsibility and contribution to her fellow students’ learning. In the photo above, CGSC Foundation Chairman Lt. Gen. (Ret.) John Miller presents Maj. Genna Speed with her award during the CGSOC Class of 2017 graduation ceremony June 9. 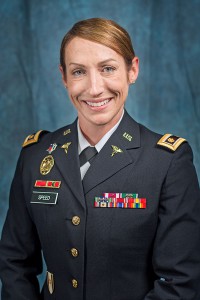 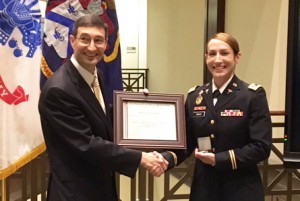 Dr. Ted Thomas, director of CGSC’s Department of Command and Leadership, presents U.S. .S. Army nurse Major Genna Speed with a framed certificate recognizing her as the 2017 recipient of the Lieutenant Colonel Boyd McCanna “Mac” Harris Leadership Award for the CGSOC Class of 2017 during a ceremony June 8 in the Lewis and Clark Center.

Maj. Genna Speed with her husband Jon during the award ceremony June 8.

The Lieutenant Colonel Boyd McCanna “Mac” Harris Leadership Award is given to the individual possessing the innate leadership and communications skills embodied in the Army Leadership concept of Be-Know-Do, a concept developed by Lt. Col. Harris when he was a CGSC instructor and doctrine writer with the Center for Army Leadership. His concept was contained in the 1983 version of FM 22-100, Army Leadership.

Lt. Col. Harris was a two-tour Vietnam veteran and was inducted into the Fort Leavenworth Hall of Fame earlier this year. The leadership award in his name is sponsored by Moira and Gary Sinise with a permanent endowment through the CGSC Foundation. Moira Sinise is Lt. Col. Harris’ sister. The endowment provides a memorial plaque in the Command and Leadership Department office as well as an individual award of a 2013 General of the Army Commemorative U. S. Silver Dollar in a presentation box along with a framed certificate. The awardee’s name is displayed on the permanent plaque in the basement of Lewis and Clark Center.

Speed enlisted in the Army in 2001, completing medic training and LPN training before being selected for the Army Medical Department (AMEDD) Enlisted Commissioning Program. Through this program, she attended the University of South Alabama, earning her Bachelor of Science (BSN) in 2006. Maj. Speed received her Masters of Science in Nursing in 2014 from Armstrong Atlantic State University.

Speed has served as a staff nurse and charge nurse on the telemetry/intermediate care unit at Dwight David Eisenhower Army Medical Center (DDEAMC) (2007-2008). After completing the Critical Care Nursing Course in 2008, she served as a critical care nurse in the Medical Intensive Care Unit at DDEAMC (2008-2009). She has also served as a brigade nurse counselor for 6th Brigade, Cadet Command (2010-2012). Upon obtaining her graduate degree as a Critical Care Clinical Nurse Specialist, Maj. Speed was assigned as an instructor with the Critical Care/Emergency Nursing Course at San Antonio Military Medical Center (2014-2016). She has been deployed in support of Operation Iraqi Freedom with the 14th Combat Support Hospital (2009-2010). Maj. Speed is from Slidell, Louisiana and has been married to her husband Jon for nine years.