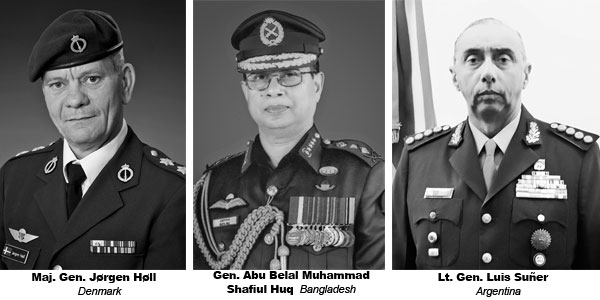 The Command and General Staff College added three international military leaders to its International Hall of Fame on March 1 at 9 a.m. at the Lewis and Clark Center on Fort Leavenworth. The induction brings to 277 the number of leaders who have been honored in the Hall of Fame from the more than 8,000 international officers who have attended courses at the college.

New inductees to the Hall of Fame include Maj. Gen. Jørgen Høll, Commander, Special Operations Command, Denmark; Gen. Abu Belal Muhammad Shafiul Huq, Chief of Staff, Bangladesh Army; and Lt. Gen. Luis Suñer, Argentina Army Chief of Staff. Belal, reminiscing about his time at Leavenworth in 1993-1994, quoted Nelson Mandela who said “There is nothing like returning to a place that remains unchanged to find the ways in which you have altered.” Belal said attending CGSC allowed him to view the world with sharpened senses. He said he appreciated learning the theory and then putting it to practical use in lab situations. “CGSC is an institution to Learn the Art of Peace,” he said.

He became the Bangladesh Army Chief of Staff in June 2015. He has served in all types of appointments available in the Army–Staff, Instructor and Command. He commanded Two Armored Battalions, Two Infantry Brigades, an Armored Brigade and Two Infantry Divisions. As a staff officer he served as the Aide-de-Camp to the President of Bangladesh, Brigade Major of an Infantry Brigade and Colonel Staff of an Infantry Division. Belal was a member of the pioneer Group of Officers sent to UN Peace Keeping Missions from Bangladesh. He was an observer in United Nations Iran-Iraq Military Observer Group in 1988-1989 and Deputy Force Commander of United Nations Mission in Ethiopia and Eritrea in 2007-2008.

Høll, who graduated from CGSC in 1991, told the assembled CGSC students there are three key themes he has tried to follow throughout his military career. First, he said, the Soldier on the ground is always the number one priority. Second, valued experience and learning will happen at the most unexpected places. And third, Trust your Soldiers and staffs-provide them vision and guidance and turn them loose to solve the problem. He became Commander of the Special Operations Command in July 2015. 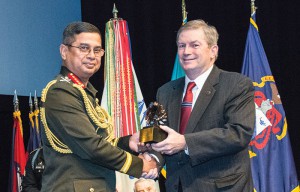 “I feel proud to have been selected to attend CGSC,” said Suñer. He said attending CGSC was a great and unique experience and he appreciated sharing the year with officers from all of America’s armed forces as well as from 80 international countries. “We all want honest, humble, brave and courageous soldiers for our armies,” he said.

Suñer graduated from CGSC in 1999. He became the Argentine Army Chief of Staff in January 2016. During his more than 30 years of active military duty, he has held assignments in Argentina and abroad. He was assigned as Deputy Support Coordinator to the Ecuadorian-Peruvian Military Observer Mission; Deputy Commander of the 601st Engineer Battalion; Chief of the 12th Jungle Engineer Battalion; Director of the Army Engineer School; Deputy Director of the Army War College; Deputy Director General for Plans, Programs, and Budget; and Director General for Army Administration and Finance. Suñer holds a Bachelor Degree in Strategy and Organization. He completed his education with the Senior Leadership and Strategy Joint Course, the U.S. Army Command and General Staff Course, and a Master’s Program in Administration Sciences from Michigan University.

International military student participation in cooperative military studies in the United States originated at Fort Leavenworth with the arrival of Swiss Lieutenant Henri Le Comte in 1894. Since then, international students, representing 165 countries, have become an integral part of the Fort Leavenworth experience. These talented military officers contribute to a rich professional and cultural exchange environment.

For more photos from this lecture visit the album on the CGSC Flickr site.