New Provost, Deputy Commandant selected as Person of the Month 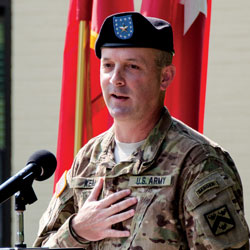 Brig. Gen. Kem assumed responsibility for both his roles in a ceremony on Aug. 31 in Fuller Hall on Fort Leavenworth, Kan. As provost, Kem will oversee reorganizing the Army’s education enterprise into a university structure that will maximize educational opportunities for Soldiers by providing valid academic credit for the education and experience they receive while on active duty. The Army University, which was established by Secretary of the Army earlier this year, encompasses all Training and Doctrine Command schools, provides a single point of contact for all Army education matters and addresses the educational needs of the Army while providing individual Soldiers and Army civilian employees the opportunity to accomplish their own academic goals. He will also oversee the Army Press, the publishing arm of the Army University that includes Military Review magazine and the Combat Studies Institute.

As Deputy Commandant and Provost, Kem is responsible for the day-to-day operations of the Army’s Command and General Staff College and these schools at Fort Leavenworth: the Command and General Staff School, School of Advanced Military Studies, School for Command Preparation, and Army Management Staff College. He is also responsible for the Western Hemisphere Institute for Security Studies at Fort Benning, Ga., and the Warrant Officer Career College at Fort Rucker, Ala.

Kem was commissioned through the United States Military Academy at West Point, N.Y., where he earned a bachelor’s degree in Civil Engineering. He later earned a Master’s of Science in Environmental Engineering, and a Masters of Business Administration from Northwestern University and the Kellogg Business School. His military education includes Engineer Officer Basic Course, Engineer Officer Advanced Course, Army Command and General Staff College, and the Industrial College of the Armed Forces where he earned a Master’s of Science in National Resource Management.