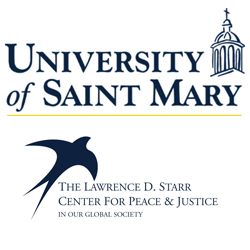 The University of Saint Mary’s Lawrence D. Starr Center for Peace and Justice in our Global Society (CPJ) is selected as the CGSC Foundation Corporate Partner for June 2019.

The CPJ is a sponsor of the CGSC Foundation’s “Distinguished Speaker Series” (DSS), which brings speakers of note on various topics to the Command and General Staff College to broaden programs for students. Speakers participate in various programs offered by the Foundation, including the DACOR (Diplomatic and Consular Officers Retired) Distinguished Visiting Professor of Diplomacy program, the General of the Armies John J. Pershing Series, the Vietnam War Commemoration Lecture Series, and the Interagency Brown-Bag lecture. Dr. Karenbeth G. Zacharias, CPJ’s director, is the champion for the CGSC Foundation-USM relationship.

“We couldn’t be more pleased than to have Karenbeth and USM involved with our program,” said Rod Cox, CGSC Foundation CEO. “Having the Center for Peace and Justice at USM engaged with our DACOR visiting professors and supporting our overall Speaker Series is a benefit to both CGSC and USM students.”

Cox said the CGSC Foundation coordinates for visiting professors, typically retired U.S. ambassadors, for the DACOR program, and coordinates for other speakers from the CGSC faculty. According to Cox, USM’s support of the program makes it much more feasible while also broadening its reach in the local region.

In addition to supporting the DSS, USM has also supported the Foundation’s “Celebration of International Friendship,” an annual event to celebrate and welcome CGSC’s international military student population each year.

The Lawrence D. Starr Center for Peace and Justice in our Global Society is a professional academic organization dedicated to the idea of promoting international awareness – in the classroom, on the campus, and in the larger community. In keeping with the ecumenical spirit of its founders, the Sisters of Charity of Leavenworth, the CPJ is equally motivated by the idea of championing the causes of community, respect, justice, and excellence. The center is committed to the promotion of attitudes, policies, and practices that foster freedom, peace, justice, inclusion, service, and human rights. The center is dedicated to studying the history, trends, problems, implications, and potential of the integrating global society.

The University of Saint Mary is a four-year Catholic liberal arts university founded by the Sisters of Charity of Leavenworth in 1923. USM offers daytime undergraduate and doctoral classes at its main campus in Leavenworth, online classes, and accelerated undergraduate degree-completion and graduate classes in the evening at its Overland Park Campus. The USM mission is to educate students of diverse backgrounds to realize their God-given potential and prepares them for value-centered lives and careers that contribute to the well being of our global society. The Princeton Review has repeatedly named the University of Saint Mary a “Best Midwestern College” every year since 2005. The distinction is based on meeting lofty standards of academic excellence and feedback from students, parents, educators, and Princeton Review staff.

For more information about the Lawrence D. Starr Center for Peace and Justice in our Global Society at the University of Saint Mary visit www.stmary.edu/cpj.