In 1856, the streets of Leavenworth, Kan., were not paved. The city had only been founded in 1854, the first city in the newly forming state of Kansas, just as the Kansas-Nebraska Act of 1854 opened the two territories to settlement. Pioneers were coming across the Missouri River, pulling their wagons and their lives up the banks of the river, moving west to start their new lives under the watchful eyes of the soldiers at Fort Leavenworth.

It was in this bustling town in 1856, that First National Bank was established. This bank was later acquired by Exchange Bank & Trust, which had formed in Atchison, Kansas, in 1857. Fast-forward to 2020, Exchange Bank & Trust is celebrating its 164-year anniversary and the recent opening of its newest bank branch in Platte City, Missouri. From its beginnings as one of the first banks in the region supporting the burgeoning establishment of the business, agricultural, retail, professional, medical and military presence in the state, Exchange Bank can now boast of 10 branches in northeast Kansas and northwest Missouri with assets in excess of $480 million and approximately 100 employees. Additionally, Exchange Bank’s officers and staff give back by serving on numerous non-profit and community boards throughout the region and the bank proudly distributes annually over $100,000 in grants and donations to regional non-profits.

For its rich history and record of service to the region, Exchange Bank & Trust is selected as the CGSC Foundation Corporate Partner for October 2020. 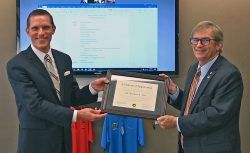 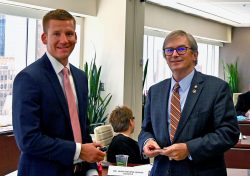 Among other programs and initiatives, Exchange Bank supported the Foundation’s “Celebration of International Friendship” for many years since its inaugural event in 2014. Additionally, Christopher Kuckelman, compliance officer and legal counsel at the bank’s branch in Lansing, Kansas, was elected as a trustee of the Foundation in 2020. Previously, Douglass J. Adair, vice president and controller of the bank in Atchison, Kansas, served as Secretary, Treasurer, and a trustee of the Foundation from 2010 through 2020.

“Exchange Bank is and has been a great supporter of our Foundation and our community,” said CGSC Foundation CEO Rod Cox. “They were with us every year of our international officer gala event; they supported our marketing efforts with the 5-Star Generals Commemorative Coins in 2013; and Chris Kuckelman and Doug Adair have been stalwart trustees on our board. We are absolutely honored and proud to have them associated with our organization.”

Exchange Bank & Trust, has truly been a key contributor to the settlement of America’s western frontier and has a record of supporting the Soldiers and families who have served at Fort Leavenworth even before Kansas became a state.

The CGSC Foundation is proud to recognize Exchange Bank & Trust for their support of the Foundation and the Soldiers and families of Fort Leavenworth and the U.S. Army Command and General Staff College.