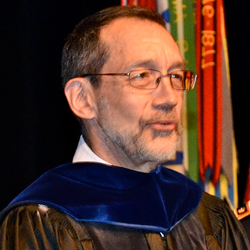 The CGSC Foundation has selected Robert F. Baumann, director of graduate degree programs for the U.S. Army Command and General Staff College, as the Person of the Month for August 2016.

Baumann has been the CGSC director of graduate degree programs since 2003 and a member of the faculty since 1984 in the department of military history. In addition to his continued teaching at CGSC, Baumann has frequently served as an adjunct faculty member at the University of Kansas and Kansas State University, where he has served on numerous thesis and dissertation committees. Additionally, as a resident accreditation expert, he coordinates the CGSC accreditation efforts for the masters degree program with the Higher Learning Commission of the North Central Association of Colleges and Schools.

Dr. Baumann congratulates a SAMS student during a graduation ceremony in Eisenhower Hall.

Baumann has recently been selected to be an educational advisor in Tashkent, Uzbekistan, delivering some lectures and helping them develop curriculum for their military officers. He will be in Uzbekistan for the next 10-11 months fulfilling these duties as part of the Ministry of Defense Advisory Program conducted by the U.S. Department of Defense’s Defense Security Cooperation Agency. Baumann’s Russian language skills and familiarity with the region made him a great candidate for the temporary position.

Baumann’s expertise lies in Russian and East European studies. He earned his bachelor’s degree in Russian in 1974 from Dartmouth College and his masters degree in Russian and East European studies from Yale University in 1976. In 1977, he earned his master of philosophy in history and in 1982, a doctorate degree in history, both from Yale University. From 1979-1980 he was a graduate exchange student at Moscow University with grant support from the Fulbright-Hayes Program and the International Research and Exchanges Board. Baumann was subsequently a research associate at Leningrad State University during the summers of 1990 and 1991. With the start of military operations in Afghanistan in 2001, Baumann conducted an officer professional development program about the Soviet-Afghan War for the 10th Mountain Division at Fort Drum just prior to their deployment. Subsequently, in March 2002, the 10th Mountain Division commander, Maj. Gen. Hagenbeck, asked Baumann to come to Bagram to brief the international staff on the Soviet experience in Afghanistan and to help collect the history of Operation Anaconda. Baumann has also been a prolific writer over the years, writing numerous books, book chapters and scholarly articles.

“Bob has been an outstanding asset for the College,” said CGSC Foundation CEO Doug Tystad. “Under his leadership, the Masters of Military Art and Science degree program had a record number of students engaged in the Class of 2016. His tireless efforts in the CGSC accreditation program with the Higher Learning Commission have led to CGSC earning accreditation for the next ten years. – His selection for this special program in Uzbekistan comes as no surprise to anyone. He is a very unique individual and CGSC can be proud to call him one of their own. His knowledge and abilities speak volumes to the quality of all of the staff and faculty at CGSC.”

We salute Dr. Bob Baumann for his contributions to the military professional body of knowledge, his leadership and stewardship of critical CGSC programs and his recent selection to serve as an advisor in Uzbekistan. He is truly deserving of our humble “Person of the Month” for August 2016.