Class leaders selected as Persons of the Month – October 2016 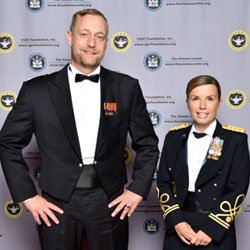 The CGSC Foundation has selected the student leaders of the Command and General Staff School Class of 2017 as the Persons of the Month for October 2016. U.S. Class President Maj. Shari Shugart and International Military Student (IMS) Chief of Staff, Maj. Jan Feldmann from Germany. 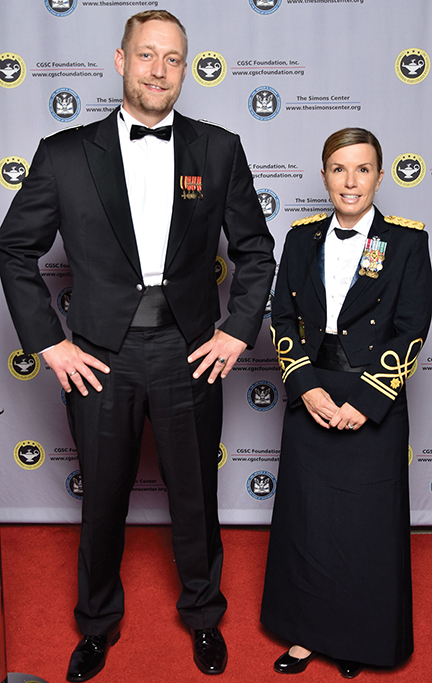 IMS CoS Maj. Jan Feldmann (Germany), Ieft, and Class of 2017 President Maj. Shari Shugart (USA) on the red carpet at the 2016 Celebration of International Friendship at the Kauffman Center for the Performing Arts in KC on Sept. 16.

“Each CGSS class has these top leaders,” said CGSC Foundation CEO Doug Tystad, “but in my experience they aren’t well-known amongst the wider class members. We’re just trying to shine a little light on them for all the extra time and effort they put into these administrative duties they’re responsible for while also participating in all the same requirements as their classmates.”

The IMS Chief of Staff (CoS) position is established in the course entitled “Applied Leadership Laboratory for International Military Students.” The duty requirements in the course outline state the CoS has the lead in coordinating the activities of the class IMS committee. It further states the CoS “must possess well-developed organizational skills and the maturity and patience to execute their duties impartially across a multinational/multicultural context.”

From the Foundation’s perspective, Maj. Shugart and Maj. Feldmann are both well-suited for their “extra” duties.

Prior to her assignment at CGSC, Maj. Shari Shugart served as a Deputy Staff Judge Advocate, Joint Special Operations Command, at Fort Bragg, N.C. Prior to that she served as the Senior Defense Counsel, U.S. Army Trial Defense Service, Schofield Barracks, Hawaii.

Before entering active duty in 2012, Shugart served as a mobilized Reservist in multiple assignments, including a professorship from 20011-2012 in the Criminal Law Department at The Judge Advocate General’s Legal Center and School, Charlottesville, Va.; and as a Staff Attorney for The Judge Advocate General’s Capital Litigation Study Group at the Pentagon from 2010-2011.  She has deployed to Camp Arifjan, Kuwait and Bagram, Afghanistan from 2009-2010.  From 2003-06, she served as a Trial Counsel for the 91st Division and 1st Corps & Fort Lewis, Wash.  Also, while in the U.S. Army Reserve, Maj. Shugart served as a Trial Counsel with 78th Legal Support Organization, Los Alamitos, Calif.; with SETAF in Vicenza, Italy; and as a Trial Counsel and Assistant Staff Judge Advocate with the 91st Division, Camp Parks, Calif.

Maj. Shugart earned a Master of Laws degree from The Judge Advocate General’s School, Charlottesville, Va.  She earned her Juris Doctor degree from Thomas M. Cooley Law School, Lansing, Mich.  She completed her undergraduate studies at the University of Arizona, Tucson, Ariz., with a Bachelor of Science degree in Family Studies.

Maj. Jan Feldmann graduated from the Kaiserin-Auguste-Viktoria-Gymnasium in Celle, Germany in 1999 and joined the German Army as an officer cadet in the Light Infantry on July 1, 1999. He completed officer training in 2002 and was commissioned as a second lieutenant in the Armored Corps on July 1, 2002. His first assignment was as a platoon leader in basic and specialized armor training in Panzerbataillon 84 in Lüneburg.

Feldmann attended the Helmut-Schmidt-University / German Armed Forces University from 2003-2007 and achieved a Hochschuldiplom – equivalent to a masters degree – in political science. Upon graduation he served as a platoon leader of Leopard tanks and executive officer and deputy company commander of an armored company in Panzerlehrbataillon 93 in Munster. In March 2009, he assumed command of a second company, Panzerbataillon 203, in Augustdorf.

After selection for the German Armed Forces Command and General Staff college, Feldmann completed six-months of French language training at the Federal Language Institute in Hürth, before starting the ninth joint General/Admiral Staff Officers course in October 2012 in Hamburg. Following graduation, he was appointed as the operations officer for Panzerlehrbrigade 9 in Munster on Oct. 1, 2014.

Feldmann’s operational experience includes a tour in Kosovo as deputy company commander of a rifle company, a tour in Kunduz/Afghanistan as battle captain and a tour in Mali as J3 (Operations) Branch head in the European Union Training Mission to Mali.

Both Shugart and Feldmann are married soldiers and enjoy athletic activities. Shugart is an avid runner. Feldmann, holder of a first degree black belt in Judo, enjoys open water swimming.

We salute Majors Shugart and Feldmann for their selection to the U.S. Army Command and General Staff College and for their contributions to leading the Class of 2017 to a successful graduation day next year. They are truly deserving of our recognition as “Persons of the Month” for October 2016.