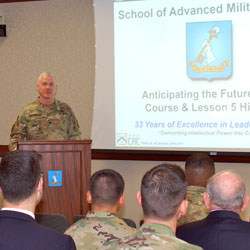 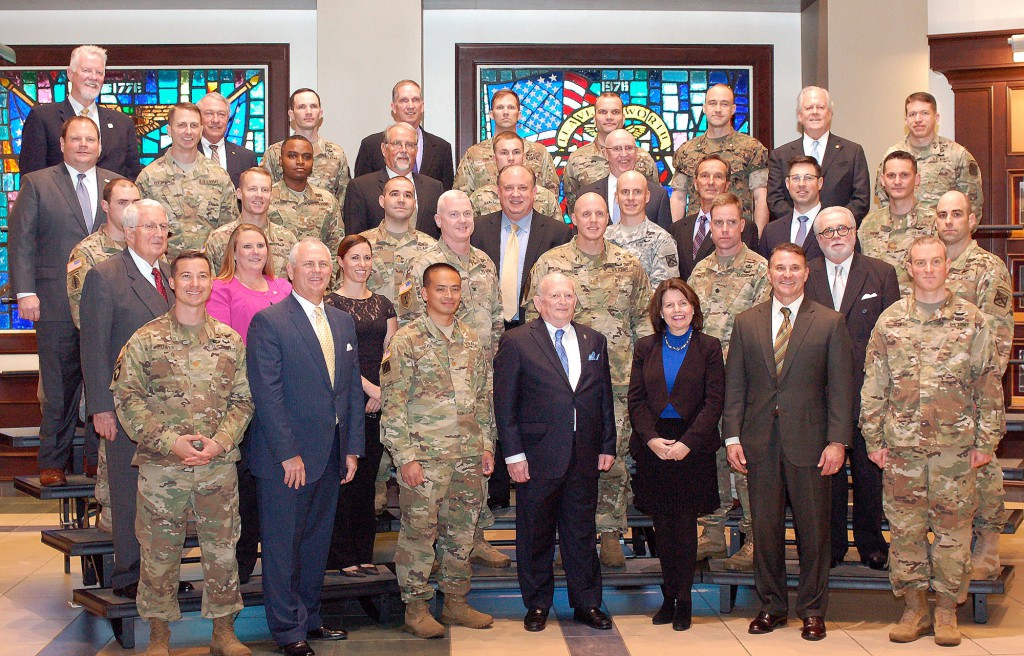 The first day began with the attendees gathering in the atrium with a short welcome by Doug Tystad, Foundation CEO. The group then moved to the Arnold Conference Room where Mr. Jeff LaMoe, CGSC Chief of Staff, provided the roundtable participants with some history of CGSC and an overview of Army professional education with special emphasis on the College. After LaMoe’s brief, the DACOR visiting professor of diplomacy, retired Ambassador Laura Kennedy, spoke to the group about geopolitical issues around the world. The evening ended with a reception in the atrium.

On day 2 of the roundtable, the group met for morning coffee in the Felts Exercise Room in Flint Hall and received an overview briefing from SAMS Director Col. James Markert. The attendees then accompanied their SAMS student escorts to their seminar rooms where they spent the morning participating in the current classroom topic of “Anticipate the Future.”

The group came back together in the Arnold Conference Room where Foundation CEO Doug Tystad provided them with an overview of the CGSC Foundation and its programs in support of the college. The remainder of the day was spent in two panel discussions, one about the SAMS program entitled “Educating Tactical Experts for Strategic Problems,” led by Col. Markert and Dr. Gerald Gorman, and the second entitled “The Operational Environment,” led by Lt. Col. Jason Curl, Maj. Amos Fox and Maj. John Brock.

Upon completion of the program Foundation Chairman Lt. Gen. (Ret.) John Miller and CGSC Deputy Commandant Maj. Gen. John Kem presented each of the attendees with a group photo and completion certificate.

The Foundation wishes to express special thanks to Col. Markert and his staff for their work to set up and host the program. Also, special thanks goes to Geiger Ready Mix for their sponsorship of the NSRT program.

In the group photo above are the participants and their SAMS student escorts along with SAMS faculty and staff and CGSC Foundation representatives. –

For more photos from the NSRT visit the CGSC Foundation Flickr site: